Use of this site indicates acceptance of the Privacy Policy and Terms of Use.
The information on this Website is not reliable and not intended to provide tax, legal, or investment advice. Nothing contained on the Website shall be considered a recommendation, solicitation, or offer to buy or sell a security to any person in any jurisdiction.
CEO.CA members discuss high-risk penny stocks which can lose their entire value. Only risk what you can afford to lose.
© 2021 - CEO.CA Technologies Ltd.
@accesswire/cielo-provides-operational-update-and-production-forecast ↻
0 online
Today This week
Search Subscribe
Members of @accesswire/cielo-provides-operational-update-and-production-forecast

VANCOUVER, BC / ACCESSWIRE / November 12, 2021 / Cielo Waste Solutions Corp. (TSXV:CMC; OTCQB:CWSFF) ("Cielo" or the "Company") is pleased to provide an operational update and production forecast including project timelines, corporate goals and objectives associated with its operating demonstration facility at Aldersyde, Alberta, (the "Aldersyde Facility") as well as Cielo's planned research and development facility at Fort Saskatchewan, Alberta (the "R&D Facility").

The Company's business strategy is focused on converting waste to fuel through proprietary technology centred on a thermal catalytic depolymerization process. Today's update builds upon the Company's press release dated September 27, 2021, in which Cielo confirmed that engineering design enhancements and system modifications were underway at the Aldersyde Facility, in order to resolve the System Issues (defined below) and achieve steady-state production. Within that same press release, the Company announced its plans for the development of the R&D Facility.

The objectives of the Aldersyde Facility are focused on demonstrating the steady-state production of distillate for the sale of diesel and naphtha derived from wood waste utilizing used motor oil ("UMO") as the carrier fluid. The facility will also serve the purposes of generating revenue, product yield and control systems optimization, operations training, maintenance planning, and establishing best practices. Operational experience and philosophy from the Aldersyde Facility will translate to larger full-scale facilities.

Cielo is focused on increasing production rates at the Aldersyde Facility to a commercial level that supports revenue generation. Earlier this year, the Company implemented various process modifications which resulted in an improvement in production performance and enabled Cielo to achieve continuous production. However, these process modifications created unintended system bottlenecks and plugging issues which resulted in decreased operational run times (the "System Issues"). Immediate efforts to rectify the System Issues proved unsuccessful. In August 2021, Cielo commenced a comprehensive analysis of the Aldersyde Facility by utilizing an internal engineering team, with the support of third-party engineering consultants and technical experts.

Utilizing the findings from this comprehensive analysis, the engineering design work at the Aldersyde Facility has continued since August 2021, with the focus on reducing downtime to achieve steady-state production. Engineering modification and design are being undertaken on three elements of the existing process: (i) the process infeed mixing system, (ii) reactor modifications and improvements, and (iii) the biomass waste system management (together, the "Aldersyde Project"). The Company is pleased to announce that it is on schedule to execute the following planned work for the Aldersyde Project:

By completing the planned work for the Aldersyde Project, Cielo anticipates realizing the following benefits at the Aldersyde Facility: 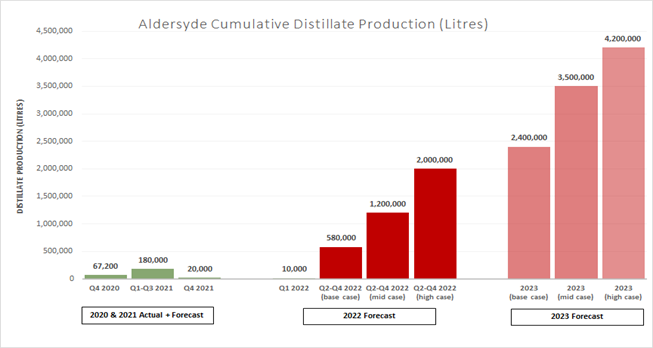 2020 and 2021 Actual and Forecast - The 2020 production was realized while operating the facility in a batch mode. Modifications to the Aldersyde Facility were made in early Q1 2021 where continuous production was attained but not sustained due to operational bottlenecks and plugging issues. Currently the facility continues to operate at a reduced rate as the Company addresses the System Issues.

2023 Forecast - The 2023 full year forecast reflects a range of cumulative distillate production with increased volumes compared to 2022, as a result of the anticipated continuous operational and systems improvements.

Following completion of the Aldersyde Project, Cielo will undertake a third phase of enhancements at the Aldersyde Facility, targeting upgrades to existing instrumentation, measurement and process system controls that are needed to improve production run time, reduce operating costs and optimize process management.

Cielo previously announced the purchase of a 60-acre land and an approximately 32,000 square feet industrial building at Fort Saskatchewan, Alberta (the "Site"). Cielo intends to build a R&D Facility with a capacity of 60 litres per hour ("lph") at the Site, which will guide the planning and design for its full-scale waste-to-fuel facility to be located at Fort Saskatchewan, Alberta (the "Full-Scale Facility"). The R&D Facility will consist of a scaled-down version of a full-scale facility, equipped with the latest process control technology for data trending, system automation, remote monitoring and process analytics. The objectives of the R&D Facility will be to determine optimal reactor design for various biomass inputs and catalyst combinations in order to maximize distillate production, improve carbon intensity score, and determine the best operational practices (collectively, the "Data"). Given the size of the Aldersyde Facility, the Data cannot be obtained in a cost-efficient manner from the Aldersyde Facility.

Cielo previously estimated a full-scale facility would have a capacity of approximately 4,000-lph; however, the Company intends to assess the economics of establishing an even larger full-scale facility given the significant footprint offered by the Site. Since the R&D Facility has a smaller 60-lph capacity, it will be fabricated and constructed within the warehouse, while the Full-Scale Facility will be constructed on the currently vacant land.

Engineering output data from the R&D Facility will provide critical information to fully understand material balance, energy balance, thermodynamics and fluid mechanics for the system which is required for modelling and scale-up calculations. These calculations would then be provided to a qualified Engineering, Procurement and Construction ("EPC") firm capable of fabricating a full-scale, state-of-the-art, commercial waste-to-fuel facility.

Current work at the Company's Fort Saskatchewan location is focused on the design, procurement and construction of the R&D Facility. The primary objective is to produce high quality engineering data for the front-end engineering design of a full-scale waste-to-fuel facility. Thereafter, the R&D Facility will undertake continuous testing of plastics, organics, railway ties, and other waste products. In 2021 the Company has made progress on meeting milestones related to construction and commissioning of the R&D Facility as follows:

Immediately following commissioning of the R&D Facility, the system will be put into operation and Cielo intends to realize the following outcomes:

Following completion of process testing with wood waste and the acquisition of sufficient data, Cielo will begin a controlled engineering approach to experiment, test and analyze plastics as the biomass infeed to produce distillate at a commercial scale. This work will include engineering design for front end process modifications and tuning of the reactor waste management system to achieve maximum yields and optimal product quality. Following testing and studies of using plastics as biomass infeed, the Company will commence additional research on commercial quantities of fuel production utilizing organic materials, railway ties, and other waste.

Details and timing of the Company's plans for the Aldersyde Facility, the R&D Facility and Cielo's future larger full-scale facilities are dependent on funding, which the Company anticipates obtaining through future revenues and financing as needed from time to time. Cielo remains committed to providing updates to shareholders on a timely basis as the Company continues to meet its milestones, and as new key objectives are established.

Cielo utilizes proprietary technology that transforms certain types of landfill garbage into high-grade diesel, kerosene (aviation jet and marine fuel) and naphtha. Cielo's proven and patented technology is currently being deployed in the Company's Aldersyde Facility, where wood waste is converted into renewable fuels. Cielo's experienced management team is well positioned with strategic partners to expand aggressively across Canada, into the US and then globally. The waste/feedstock that will be used in the Company's green facilities is the world's widely available and inexpensive feedstock, including household, commercial and construction garbage, used tires, railway ties, telephone poles, as well as all types of plastic, some of which currently cannot be recycled or deposited into landfills. Cielo's goal is to manufacture waste to fuel while ridding the world of unwanted and problematic garbage.