Use of this site indicates acceptance of the Privacy Policy and Terms of Use.
The information on this Website is not reliable and not intended to provide tax, legal, or investment advice. Nothing contained on the Website shall be considered a recommendation, solicitation, or offer to buy or sell a security to any person in any jurisdiction.
CEO.CA members discuss high-risk penny stocks which can lose their entire value. Only risk what you can afford to lose.
© 2022 - CEO.CA Technologies Ltd.
@nasdaq/wholesale-reorders-account-for-48-of-taat-sales-volume ↻
0 online
Today This week
Search Subscribe
Members of @nasdaq/wholesale-reorders-account-for-48-of-taat-sales-volume

LAS VEGAS and VANCOUVER, British Columbia, Jan. 18, 2022 (GLOBE NEWSWIRE) -- TAAT™ GLOBAL ALTERNATIVES INC. (CSE: TAAT) (OTCQX: TOBAF) (FRANKFURT: 2TP) (the “Company” or “TAAT™”) is pleased to announce that during its fiscal first quarter of 2022 (November 1, 2021 through January 31, 2022) approximately 48% of its overall sales volume in the United States is derived from wholesale reorders made by existing accounts. The global store count of TAAT™ retailers is now in the thousands, between more than 2,000 confirmed retailers in the United States and additional independent store placements made through “cash-and-carry” wholesale warehouses (detailed in the Company’s January 11, 2022 press release), as well as initial store placements of TAAT™ in the United Kingdom starting in Croydon (London’s southernmost borough). Through its nationwide network of distribution partners in the United States, TAAT™ continuously evaluates its performance in specific markets and has leveraged such insights to drive recurring orders from existing accounts while continuing to add new store locations. As the Company seeks to further expand its market share in the tobacco industry during TAAT™’s second year of being sold at retail, it is instituting distinct strategies for both acquiring new points of sale as well as maintaining productive relationships with existing retailers in the interest of generating long-term value.

Image 1 accompanying this announcement is available at https://www.globenewswire.com/NewsRoom/AttachmentNg/a8fee5b0-38c9-47fa-bff5-79f1976559aa

Throughout 2021, TAAT™ carried out several campaigns to attract the interest of smokers aged 21+ in the United States with the objective of prompting them to try TAAT™ as a nicotine-free and tobacco-free alternative to tobacco cigarettes. In addition to targeted online advertisements directing smokers aged 21+ to the Company’s TryTAAT landing page (http://trytaat.com) where requests for a sample pack can be made, in 2021 TAAT™ also ran its first “Out-of-Home” video advertisements on 10,442 gas pump displays in Ohio, and sponsored the entourage of heavyweight champion boxer Floyd Mayweather during his June 6, 2021 fight against Logan Paul resulting in millions of impressions of the TAAT™ brand globally. The Company intends to build upon the brand awareness momentum it gained in 2020 and 2021 by introducing new marketing tactics such as the following:

Image 2 accompanying this announcement is available at https://www.globenewswire.com/NewsRoom/AttachmentNg/1569d89b-d89f-41c8-b1cd-d682bb939e90

Furthermore, the Company announced in a press release dated September 3, 2021 that the advanced formulation of Beyond Tobacco™ using reconstituted material was finalized, yielding overwhelmingly positive feedback from tobacco wholesalers in the United States as well as the United Kingdom, Ireland, Germany, Poland, France, and Switzerland. Characteristics of the advanced formulation include a more “realistic” similarity to actual tobacco in taste and smell, as well as adjustments to its burning tendencies to align the “puff count” with that of a standard tobacco cigarette of the same length while also ensuring TAAT™ sticks do not extinguish prematurely after being ignited. These improvements to the experience of smoking TAAT™ for smokers aged 21+ made possible by the Beyond Tobacco™ advanced formulation appear to have been beneficial to conversion rates, which could also be a contributing factor to the Company’s wholesale reorder rates, now at an all-time high.

Image 3 accompanying this announcement is available at https://www.globenewswire.com/NewsRoom/AttachmentNg/78e4a961-dff6-499a-b00e-9bfce8a2018d

TAAT™ Chief Executive Officer Setti Coscarella commented, “Given the amount of smokers aged 21+ who are actively looking for a better alternative to tobacco cigarettes, it is relatively easy to convert one-time initial purchases of just about any novel approach to delivering nicotine; whether that may be a vaping device, nicotine patches, or consumables such as gums and lozenges. While the companies who make these alternative solutions will often boast about their initial popularity, you won’t frequently hear them talking about whether or not that popularity was sustained. This is for the simple reason that these alternatives do not offer the sensory-motor experience of pulling, lighting up, smoking, flicking, extinguishing, and safely discarding a combustible stick. As such, smokers aged 21+ will often abandon these alternatives shortly after trying them in favour of returning to that experience, save for ‘Heat-not-Burn’ products which tend to have far higher retention rates compared to other alternatives to cigarettes. Because TAAT™ can offer a set of motions and sensations that are substantially similar to those enjoyed by smoking a tobacco cigarette, it is clear that many smokers aged 21+ who try switching to TAAT™ are sticking with it. This has been reflected by our rate of repeat wholesale orders, which currently makes up nearly half of our overall sales volume in the United States in the current fiscal quarter. With a steady stream of initial wholesale orders from new distributors, as well as direct-to-consumer orders from smokers aged 21+ in the United States, I am thrilled that we have matured to the point that we are building the width of our footprint by adding stores both domestically and internationally, while also deepening that footprint with sustained popularity of TAAT™ among current smokers. We believe this foreshadows an exciting year to be had in 2022 as we ramp up our commercialization efforts at a global level.” 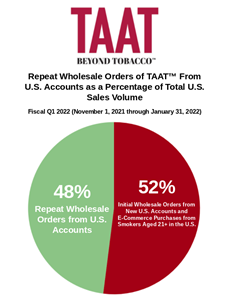 After launching TAAT™ at retail in Ohio in December 2020, the Company has grown its store count to more than 2,000 stores in the United States alone, in addition to the Company’s first store placements in the United Kingdom which were first announced in December 2021. As smokers aged 21+ are beginning to convert to TAAT™ , the Company is pleased to announce that during its fiscal Q1 2022 (November 1, 2021 through January 31, 2022) nearly one half of its U.S. sales volume is derived from repeat wholesale orders, as TAAT™ attentively services existing accounts while continuing to ambitiously pursue new store placements. 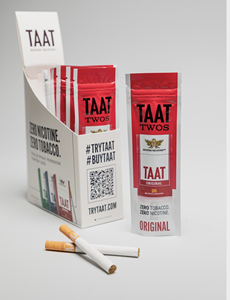 To offer smokers aged 21+ the ability to sample TAAT™ Original, Smooth, or Menthol without purchasing a full 20-stick pack, the Company will be releasing “TAAT™ Twos” to its wholesale partners beginning in 2022. Based on observations from TAAT™ retailers, the Company has identified small-format sample packs as an opportunity to prompt smokers aged 21+ to try TAAT™ for little or no cost at participating stores. The Company believes this offering is likely to further enhance adoption of TAAT™, which could sustain or strengthen its current reorder rate. 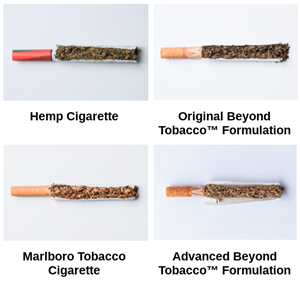 Several attributes of the advanced Beyond Tobacco™ formulation have made improvements to the TAAT™ user experience, making it even more similar to the experience of smoking a tobacco cigarette. The visible differences between the original and advanced Beyond Tobacco™ material formulations can be seen above, also compared to a standard hemp cigarette as well as a Marlboro cigarette; the world’s most popular tobacco product.