Use of this site indicates acceptance of the Privacy Policy and Terms of Use.
The information on this Website is not reliable and not intended to provide tax, legal, or investment advice. Nothing contained on the Website shall be considered a recommendation, solicitation, or offer to buy or sell a security to any person in any jurisdiction.
CEO.CA members discuss high-risk penny stocks which can lose their entire value. Only risk what you can afford to lose.
© 2016 - Pacific Website Company Inc.
@newsfile/blackrock-outlines-program-to-evaluate-historic-mineralized ↻
0 online
Today This week
Search Subscribe
Members of @newsfile/blackrock-outlines-program-to-evaluate-historic-mineralized

by @newsfile on 7 May 2020, 08:49
Blackrock Outlines Program to Evaluate Historic Mineralized Mine Dumps and Tailings in Surface Material at Its Tonopah West Project

The Company has reviewed drillhole and surface sample analysis along with metallurgical analysis previously conducted on the Slime Wash tailings and historic mine dumps located on the Tonopah West property. The Company has established a work program to evaluate the past metallurgical results and confirm the 2011 drilling in the Slime Wash tailings as well as supplement historic work done on the mine dumps with drilling and metallurgical testing. The initial phase of the evaluation program will include desktop review of the existing metallurgical, drillhole and surface sample data sets, to be followed by surface sampling and 700 metres of sonic drilling at an estimated cost of $225,000. The work program is scheduled to commence in June and is expected to be completed by September 2020.

Andrew Pollard, President & CEO stated, "Tonopah is one of the largest known silver districts in North America and with roughly fifty years of historic production, the consolidated properties that make up the Tonopah West project provide potential opportunities both at surface and underground. As we are about to embark on a planned 7,000 metre reverse circulation drilling program (see news release April 27, 2020) targeting strike and dip extensions of well-defined, past-producing veins, management has decided to concurrently move forward to assess the potential of the historic tailings and mine dumps found on the surface throughout our property. Mining methods have come a long way since production ceased in the district in the 1950's, and given the historic high-grade nature of the production, which averaged at 50g/t AuEq (or 2125g/t AgEq)[1], we want to evaluate the precious metal potential in the material left at the surface. We have inherited an extensive amount of historic exploration and metallurgical information, which we will seek to verify and use to guide us in our efforts to maximize the project's full potential."

The Slime Wash tailings cover an area of approximately 32 hectares (78 acres) and average 1.5 metres (5 ft) thick. The Scoping Study, along with an auger drill program completed in August 2011 confirms the presence of 600,000 tonnes of mineralized tailings confined within the Slime Wash. A total of 102 surface samples completed in 1985 and 1986 returned an average gold grade of 0.65 g/t and an average silver grade of 61.4 g/t. In 2011, 165 follow-up auger drillhole program returned an average grade of 0.14 g/t for gold and 21.38 g/t for silver for the tailings material. A total of 267 surface and auger drillhole observations were used to calculate the tonnage of the material (See Figure 1). The average gold grade was 0.39 g/t and the average silver grade was 41.4 g/t for the combined drill hole and surface sample datasets.

A series of metallurgical tests were completed on the tailings in 1986 and 2011. Work completed includes bottle roll tests, column leach test and a 1000 tonnes heap leach pilot plant. The reports show a weighted average recovery for the bottle rolls, column test and pilot heap leach that were 62.6% for gold and 66.4% for silver; however, a review of the completed metallurgical test work and recommendations will be included in the Company's evaluation.

In addition to the Slime Wash material, there are a number of historic mine dumps. There are nine surface dumps that were surveyed in 2011. Based on the detailed surveys, the nine dumps are estimated to contain 450,000 tonnes of material. Historic surface sampling of the dump material returned grades from 13.7 g/t to 161 g/t silver and 0.137 g/t to 1.64 g/t gold. Additional sampling and drilling of the dumps is required to understand the metal distribution.

The Tonopah silver district is reported to have produced 174 Mozs of silver and 1.8 Mozs of gold from 7.45 million tonnes of material. The Tonopah Extension Mining Company produced the Slime Wash tails from their 60-stamp mill that produced 450 tonnes of material daily. The tailings were impounded with a series of dikes across Slime Wash with the overflow continuing down stream. The tailings are up to 4.6 metres thick with the average thickness at 1.54 metres. The mill burned down in the 1940s[2]. 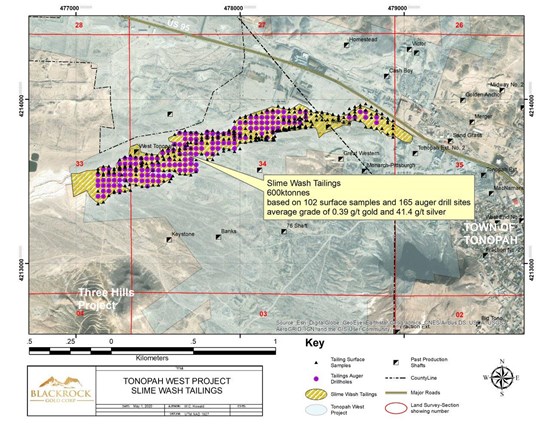 Surface sampling reported in the Scoping Study has returned higher gold and silver grades than the auger drill samples. The cause of this anomaly is uncertain and will require more sampling to identify the cause.

Blackrock's exploration activities at the Tonopah West Project are being conducted and supervised by Mr. William Howald, Executive Chairman of Blackrock Gold Corp. Mr. William Howald, AIPG Certified Professional Geologist #11041, is a Qualified Person as defined under National Instrument 43-101. He has reviewed and approved the contents of this news release.

Blackrock is a junior gold-focused exploration company that is on a quest to make an economic discovery. Anchored by a seasoned Board, the Company is focused on its Nevada portfolio consisting of low-sulfidation epithermal gold & silver projects located along on the established Northern Nevada Rift in north-central Nevada, and the Walker Lane trend in western Nevada.

This news release contains "forward-looking statements" within the meaning of Canadian securities legislation. Such forward-looking statements concern the Company's strategic plans, completion and exercise of the Tonopah option agreement, timing and expectations for the Company's exploration and drilling programs, estimates of mineralization from historic drilling, geological information projected from historic sampling results and the potential quantities and grades of the target zones. Such forward-looking statements or information are based on a number of assumptions, which may prove to be incorrect. Assumptions have been made regarding, among other things: conditions in general economic and financial markets; accuracy of historic assay results; geological interpretations from drilling results, timing and amount of capital expenditures; performance of available laboratory and other related services; future operating costs; and the historical basis for current estimates of potential quantities and grades of target zones. The actual results could differ materially from those anticipated in these forward-looking statements as a result of the risk factors including: the ability of the Company to complete the Tonopah lease option, the timing and content of work programs; results of exploration activities and development of mineral properties; the interpretation and uncertainties of historic mineral estimates,and other geological data; receipt, maintenance and security of permits and mineral property titles; environmental and other regulatory risks; project costs overruns or unanticipated costs and expenses; availability of funds; failure to delineate potential quantities and grades of the target zones based on historical data, and general market and industry conditions. Forward-looking statements are based on the expectations and opinions of the Company's management on the date the statements are made. The assumptions used in the preparation of such statements, although considered reasonable at the time of preparation, may prove to be imprecise and, as such, readers are cautioned not to place undue reliance on these forward-looking statements, which speak only as of the date the statements were made. The Company undertakes no obligation to update or revise any forward-looking statements included in this news release if these beliefs, estimates and opinions or other circumstances should change, except as otherwise required by applicable law.

[2] Source: Nevada Bureau of Mines and Geology files and United States Bureau of Mine Minerals Yearbooks. US short tons have been converted to metric tonnes by multiplying short tons by 0.9072

To view the source version of this press release, please visit https://www.newsfilecorp.com/release/55528