Use of this site indicates acceptance of the Privacy Policy and Terms of Use.
The information on this Website is not reliable and not intended to provide tax, legal, or investment advice. Nothing contained on the Website shall be considered a recommendation, solicitation, or offer to buy or sell a security to any person in any jurisdiction.
CEO.CA members discuss high-risk penny stocks which can lose their entire value. Only risk what you can afford to lose.
© 2016 - Pacific Website Company Inc.
@newswire/etruscus-intersects-highest-copper-grades-to-date-at ↻
0 online
Today This week
Search Subscribe
Members of @newswire/etruscus-intersects-highest-copper-grades-to-date-at

VANCOUVER, BC, March 11, 2021 /CNW/ - Etruscus Resources Corp. (CSE: ETR) (OTC: ETRUF) (FSE: ERR) (the "Company" or "Etruscus") is pleased to announce core intersections from its 2020 drill campaign that tested geophysical and geochemical anomalies in and around the company's Black Dog deposit.  Results further demonstrate that the Black Dog VMS system, located in the Eskay Camp of B.C.'s resource-rich Golden Triangle, is much larger than previously indicated, and remains open in all directions as well as at depth. 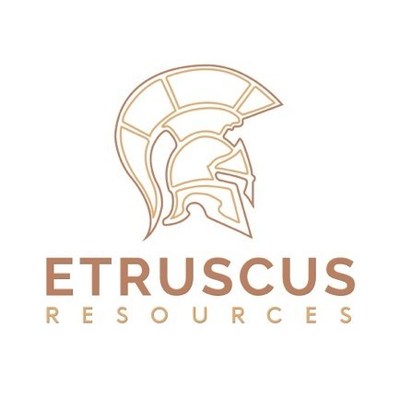 Notably, Etruscus has cut 5.2% copper (the highest copper grade ever recorded in drilling at Black Dog) and 120 g/t silver over 0.60 meters ("m") within a broader 3.8 m interval grading 1.15% copper and 27 g/t silver.  This "feeder zone" mineralization also has highly anomalous gold, lead and zinc in drill hole RR20-09, starting at a downhole depth of 101.2 m.

The drill program was designed to test four previously undrilled areas for new mineralization.  Drilling at three of the targets intersected mineralization including massive, semi-massive and disseminated sulphides, expanding the strike length of the mineralized horizon by 43% to 4.0 km from 2.8 km.

The extended mineralized strike length supports our theory that the VMS system which generated the Black Dog Deposit could be significantly larger in size and scale, possibly extending to the Hurricane target, 13 km northwest of the existing deposit, where similar geology has been identified (Click Here to View Hurricane News).  Additional areas within this extended mineralized horizon remain untested and follow-up is planned for 2021.

Three of the areas drilled were large step-outs from the Black Dog deposit.  Two of the large step-out holes encountered the mineralized horizon and unique geology correlative to the deposit.  Both intercepts at the Wall and Stardust targets prove the mineralized horizon is quite extensive both along strike and down dip. This further increases the probability of locating another lens within this horizon.

Drill hole RR20-09 was collared on the western edge of the Black Dog deposit with the goal of testing depth potential underneath the horizon as a significant amount of historic drilling had only been completed to a depth of 200 m. Etruscus was pleased to intersect two massive sulphide horizons demonstrating two different styles of mineralization within a 16 m package of favourable horizon. Bedded massive sulphide including strong lead and zinc mineralization was followed by a deeper more copper-rich stringer style mineralization in the footwall. This second intercept was the best copper grade reported across all historic drilling and the mineralization style matched that of a VMS feeder zone. High copper grades reflect the hottest part of the system and can be used as a targeting tool for future drilling (Click Here to View Core Image).  Advancing knowledge at the Black Dog VMS can also be extrapolated to other areas of interest such as the newly discovered Hurricane Target where very similar geology to that of the Black Dog has been identified.

Deep drilling at hole RR20-12 successfully tested and hit The Wall geophysical anomaly at 500 m below surface, near the depth predicted from 3D modeling. The drilling identified anomalous silver, copper, and zinc and other elements that are reflective of hydrothermal mineralization and metal enrichment. Black argillite and mudstones that are known to host the Black Dog mineralization were identified as the host rocks.

Drilling at The Wall has identified the favourable horizon under the limestone cover to a depth of 500 m.  This opens up large areas of prospective ground west of the Black Dog for further exploration. The Company will identify subbasins where thicker metal accumulation is possible, within this "string of pearls" deposit model. Preliminary geological modeling has also demonstrated that historic down dip drilling did not penetrate far enough to test the horizon (Click Here to View Cross Section). Data is being reviewed and further geophysical work including IP and/or ZTEM for deep drill targeting is being proposed.

Although conductivity is a primary targeting tool for VMS systems, certain deposits such as the world class Eskay Creek, located 45 km east, are not highly conductive.  Geochemistry and geology are equally important and with each drill hole the geological model improves.

The Stardust Target (RR20-11) was targeting biogeochemical and chargeability anomalies peripheral to a broad, strong, magnetic anomaly located 1.5 km southeast of the Black Dog deposit. Assay results returned up to 32 g/t silver, with elevated lead and zinc, in a zone of disseminated sulphides hosted in the typical Black Dog rocks of black argillite/mudstone. The intersection was geologically and geochemically correlative to the Black Dog Horizon and has therefore provided better spatial controls on this important time horizon.

Stardust remains an intriguing target and will be investigated in 2021 for the possibility of multiple mineralized events. The biogeochemistry anomalies in the area have not been fully tested and different projections of the horizon exist on this part of the property. Significant areas remain untested and the potential for continued expansion remains high as follow up on the surface geochemistry will help expand this target.

A fourth drill hole (RR20-10) tested the Brown Sugar geophysical anomaly which was determined to be caused by conductive clays. The Company is currently evaluating plans for 2021 which could include both drilling near the Black Dog deposit, such as Angie to start the season, and at new targets, the Hurricane and Thunderstruck, identified on recently staked Rock & Roll claims.

Dave Webb, Vice President Exploration reports, "Positive intercepts in RR20-09 have helped us better understand the mineralizing event, both at the Black Dog and Hurricane Targets. Hitting the strongest copper grades to date also lets us vector in on possible feeder structures that may lead to untapped mineralization. RR20-11 and 12 extend the favourable stratigraphy, providing opportunities to evaluate other geophysical and geochemical anomalies along this trend where untested horizons adjacent to the deposits may exist.  Overall, we are pleased with our results and look forward to the upcoming 2021 season.  We continue to discover more evidence that the Black Dog VMS system is large and scalable, and we are continually improving our geological modeling to better pinpoint other, well-mineralized lenses to add to our existing resources."

Technical aspects of this news release have been reviewed and approved by Dr. Dave R. Webb, Ph,D., P.Geo., who is a Qualified Person as defined under National Instrument 43-101.

The Company has adopted a rigorous quality assurance and quality control ("QA/QC") program to ensure best practices in sampling both diamond drill core and surface rock chip samples of approximately 1 kg in weight. The Company's samples and drill core are being assayed by MSA LABS which has facilities in Terrace and Langley, BC. and is independent of the Company. Core is flown from drill sites to the core shack facility where it was sampled at 0.5-3 m intervals. The samples were then half cut with one half sent to the lab and the other half stored on site. Once at the lab, samples were crushed to 70% pass 2mm fraction, and then a 250g split was pulverized to better than 85% passed a 75-micros screen. The geochemical analyses were performed by MSA LABS using multi-element aqua-regia digestion ICP-MS package (IMS-111). Gold was analyzed by fire assay technique FAS-114. Higher gold grades (>3 g/t) were analyzed by fire assay. MSA LABS is a provider of geochemical laboratory services for the exploration and mining industries is an ISO 17025 (Testing and Calibration) and ISO 9001 (Quality Management System) accredited laboratory. In addition to the lab's internal QA/QC program, the Company inserted 10% lab certified standards, blanks and field duplicates into the overall sampling stream.

Etruscus Resources Corp. is a Vancouver-based exploration company focused on the development of its 100%-owned Rock & Roll and Sugar properties comprising 27,880 hectares near the past producing Snip mine in Northwest B.C.'s prolific Golden Triangle.

Etruscus is traded under the symbol "ETR" on the Canadian Securities Exchange, "ETRUF" on the OTC and "ERR" on the Frankfurt Stock Exchange and has 28,514,306 common shares issued and outstanding.

Neither the CSE nor its Regulation Services Provider (as that term is defined in the policies of the CSE) accepts responsibility for the adequacy or accuracy of this release.