Use of this site indicates acceptance of the Privacy Policy and Terms of Use.
The information on this Website is not reliable and not intended to provide tax, legal, or investment advice. Nothing contained on the Website shall be considered a recommendation, solicitation, or offer to buy or sell a security to any person in any jurisdiction.
CEO.CA members discuss high-risk penny stocks which can lose their entire value. Only risk what you can afford to lose.
© 2021 - CEO.CA Technologies Ltd.
@newswire/northern-shield-advances-root-cellar-gold-silver ↻
0 online
Today This week
Search Subscribe
Members of @newswire/northern-shield-advances-root-cellar-gold-silver

OTTAWA, ON, June 29, 2021 /CNW/ - Northern Shield Resources Inc. ("Northern Shield" or the "Company") (TSXV: NRN) is pleased to announce that it has made significant advancement at the Root & Cellar Gold-Silver Project ("Root & Cellar" or the "Project") in Newfoundland. These advancements stem from two components: 1) prospecting, and 2) a ground geophysical program consisting of Spectral IP (Induced Polarization) and Resistivity, both pointing to a potentially very large system at Root and Cellar, particularly at the Conquest Zone. The Company can earn a 100% interest in the Property, which is being explored for epithermal gold-silver mineralization and porphyry copper deposits. 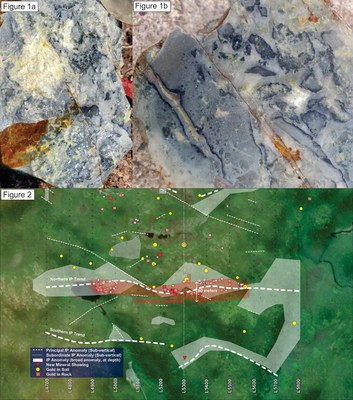 Prospecting
Prospecting and ground truthing of some of the near surface IP anomalies at the Conquest Zone identified from the geophysical survey has uncovered additional mineralized outcrop. These showings consist of sulphide-bearing and strongly silicified outcrops locally hosting chalcedonic quartz displaying early stages of colloform banding and ginguro development (Figure 1). Samples are being shipped for analysis. These discoveries were made in the vicinity of grid lines 5300E and 5400E (Figure 2) where IP results show a chargeability anomaly coming to surface. Note that chargeability can be indicative of the presence of disseminated sulphides, which has also been visually confirmed with the prospecting.

The discovery of these mineralized outcrops has increased the exposed width of the Conquest Zone from 40 metres to over 80 metres at this location. The Conquest Zone, which is believed to be a sub-vertical feature, has so far been traced on surface for 650 metres with grades up to 48 g/t Au (see press release, May 19, 2019). The ground IP survey shows a coincident chargeability anomaly with a strike length of 1,100 metres and open at both ends (see details below).

IP Survey
The ground Spectral IP and Resistivity geophysical survey, which totalled 25 line-kilometres and covered the Conquest Zone and recently discovered Windfall Zone, is now complete with modelling underway. Although substantial chargeability anomalies often associated with high resistivity (silicification) exist in, and immediately south, of the Windfall Zone, this press release focuses on Conquest because interpretations and ground truthing are more advanced. An update on the Windfall area will be provided when the data has been fully modeled and interpreted and, ground-truthing has taken place where possible.

The results from the IP survey at Conquest show two principal east-west trending IP chargeability anomalies (Figure 2) and numerous other subordinate cross-cutting IP trends (Figure 2). The northernmost of these two anomalies coincides with the Conquest showing and is traceable for 1,100 metres, reaching the surface near the middle. It is generally subvertical but broadens at depth. A second parallel chargeability anomaly is located approximately 250-300 metres south and can also be traced for 1,000 metres. It dips to the north and in places appears to converge with the northern Conquest anomaly at depth. The southern IP anomaly is located within an area of little outcrop but where a series of soil samples elevated in gold form a trend adjacent to the IP target.

These two linear IP anomalies are also located on the flanks of a deep-penetrating, magnetic low feature (Figure 3), which is consistent with a low-sulphidation model.

"These are very encouraging IP results which were quickly validated by the discovery of further mineralized outcrop after some arduous hand trenching by prospector, Jeffrey Brushett. The width of the Conquest showing is now up to 80 metres; if this is not remarkable enough, the IP results suggest another parallel zone 250 metres to the south."

The survey program at Root & Cellar was contracted to Clearview Geophysics of Brampton, Ontario, and was overseen by Joe Mihelcic, P. Geo. and a qualified person under NI 43-101. This press release has also been reviewed by Christine Vaillancourt, P. Geo. and the Company's Chief Geologist. 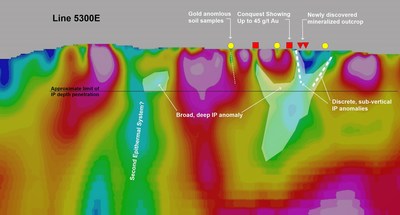