Use of this site indicates acceptance of the Privacy Policy and Terms of Use.
The information on this Website is not reliable and not intended to provide tax, legal, or investment advice. Nothing contained on the Website shall be considered a recommendation, solicitation, or offer to buy or sell a security to any person in any jurisdiction.
CEO.CA members discuss high-risk penny stocks which can lose their entire value. Only risk what you can afford to lose.
© 2022 - CEO.CA Technologies Ltd.
@globenewswire/osisko-metals-reports-additional-drill-results-at-mount-ebcb9 ↻
0 online
Today This week
Search Subscribe
Members of @globenewswire/osisko-metals-reports-additional-drill-results-at-mount-ebcb9

MONTREAL, Jan. 24, 2023 (GLOBE NEWSWIRE) -- Osisko Metals Incorporated (the “Company or "Osisko Metals") (TSX-V: OM; OTCQX: OMZNF; FRANKFURT: 0B51) is pleased to announce additional drilling results from the Gaspé Copper Project, located in the Gaspé Peninsula of Quebec. Twelve of the eighteen holes being reported were collared on the periphery of the existing Mount Copper open pit and utilized controlled directional drilling techniques, including one long drill hole that was flattened at shallow dips to crosscut the higher-grade mineralization below the existing open pit (see map).

Robert Wares, Chairman & CEO, commented: “We are very happy with this latest slate of drill results at Gaspé Copper, which are not only confirming grades at the Mount Copper deposit but also expanding the modelled limits of mineralization. Final results of the 2022 program are still pending, including another long directional drill hole that was designed to crosscut a known northwestern discontinuity and intersect higher grade mineralization below the bottom of the existing pit. We look forward to announcing these final results in the near future and resume drilling early next summer.”

Intersections marked with an asterisk in the above table extended mineralization beyond the 2022 MRE block model and hence may add to the next resource estimate update. Intersections of less than 10 metres are not reported. The maximum internal dilution of reported intersections (below calculated composites of 10.5 metres grading minimum of 0.16% Cu) is 5.0 metres.

The start of mineralization in many of the holes is relatively deep as they were collared well outside the block model envelope (modelled mineralized shell) in order to reach desired targets within the model.

DDH 30-996A was collared on the eastern margin of the pit, outside of the block model, and failed at a depth of 108 metres.

Metal grades tend to decrease further away from the source, very gradually, leaving abundant lower-grade mineralization surrounding the center of the system. Economic factors detailed in the MRE have changed since the historical mine was closed such that drill results on the margin of the pit are generally above the proposed cut-off grade of 0.16% Cu.

Osisko Metals would like to announce that Killian Charles, Vice President of Corporate Development, has assumed the role of CEO & President of Brunswick Exploration (“BRW”) as of January 1st. In doing so, he has left his role with the Company to focus on BRW and will remain with the Company in an advisory capacity. We wish him all the best in his new role, and thank him for his dedication to helping us obtain our flagship projects and communicating our vision and progress to shareholders.

Mr. Jeff Hussey is the Qualified Person and President/COO for Osisko Metals Incorporated. He is responsible for the technical data reported in this news release and he is a Professional Geologist registered in the Province of Quebec.

Osisko Metals adheres to a strict QA/QC program for core handling, sampling, sample transportation and analyses. Drill core samples from the Mines Gaspe project area are securely transported to its core facility on site, where they were logged and sampled. Samples selected for assay are shipped to ALS Canada Ltd.’s preparation facility in Sudbury. Pulps are analyzed at the ALS Canada Ltd. facility in North Vancouver, BC. All samples are analyzed by four acid digestion followed by both ICP-AES and ICP-MS for a multi-element suite with a 1% upper detection limit for base metals.

Osisko Metals Incorporated is a Canadian exploration and development company creating value in the critical metals space. The Company controls one of Canada’s premier past-producing zinc mining camps, the Pine Point Project, located in the Northwest Territories for which the 2022 PEA has indicated an after-tax NPV of $602M and an IRR of 25% is based on the current Mineral Resource Estimates that are amenable to open pit and shallow underground mining and consist of 15.7Mt grading 5.55% ZnEq of Indicated Mineral Resources and 47.2Mt grading 5.94% ZnEq of Inferred Mineral Resources. Please refer to the technical report entitled “Preliminary Economic Assessment, Pine Point Project, Hay River, Northwest Territories, Canada” dated July 30, which has been filed on SEDAR. The Pine Point Project is located on the south shore of Great Slave Lake in the Northwest Territories, near infrastructure, paved highway access, and has an electrical substation as well as 100 kilometres of viable haulage roads already in place.

The Company is also in the process of acquiring, from Glencore Canada, a 100% interest in the past-producing Gaspé Copper Mine, located near Murdochville in the Gaspé peninsula of Quebec. The Company is currently focused on resource evaluation of the Mount Copper Expansion Project that hosts a NI43-101 Inferred Resource of 456Mt grading 0.31% Cu (see April 28, 2022 press release). Gaspé Copper hosts the largest undeveloped copper resource in Eastern North America, strategically located near existing infrastructure in the mining-friendly province of Quebec.

For further information on this press release, visit www.osiskometals.com or contact:

This news release contains "forward-looking information" within the meaning of applicable Canadian securities legislation based on expectations, estimates and projections as at the date of this news release. Any statement that involves predictions, expectations, interpretations, beliefs, plans, projections, objectives, assumptions, future events or performance are not statements of historical fact and constitute forward-looking information. This news release may contain forward-looking information pertaining to the Pine Point Project, including, among other things, the results of the PEA and the IRR, NPV and estimated costs, production, production rate and mine life; the expectation that the Pine Point Project will be a robust operation and profitable at a variety of prices and assumptions; the expected high quality of the Pine Point concentrates; the potential impact of the Pine Point Project in the Northwest Territories, including but not limited to the potential generation of tax revenue and contribution of jobs; and the Pine Point Project having the potential for mineral resource expansion and new discoveries. Forward-looking information is not a guarantee of future performance and is based upon a number of estimates and assumptions of management, in light of management’s experience and perception of trends, current conditions and expected developments, as well as other factors that management believes to be relevant and reasonable in the circumstances, including, without limitation, assumptions about: favourable equity and debt capital markets; the ability to raise additional capital on reasonable terms to advance the development of its projects and pursue planned exploration; future prices of zinc and lead; the timing and results of exploration and drilling programs; the accuracy of mineral resource estimates; production costs; operating conditions being favourable; political and regulatory stability; the receipt of governmental and third party approvals; licenses and permits being received on favourable terms; sustained labour stability; stability in financial and capital markets; availability of equipment; and positive relations with local groups. Forward-looking information involves risks, uncertainties and other factors that could cause actual events, results, performance, prospects and opportunities to differ materially from those expressed or implied by such forward-looking information. Factors that could cause actual results to differ materially from such forward-looking information are set out in the Company’s public documents filed at www.sedar.com. Although the Company believes that the assumptions and factors used in preparing the forward-looking information in this news release are reasonable, undue reliance should not be placed on such information, which only applies as of the date of this news release, and no assurance can be given that such events will occur in the disclosed time frames or at all. The Company disclaims any intention or obligation to update or revise any forward-looking information, whether as a result of new information, future events or otherwise, other than as required by law.

Neither the TSX Venture Exchange nor its Regulation Services Provider (as that term is defined in the policies of the TSXV) accept responsibility for the adequacy or accuracy of this news release.

A photo accompanying this announcement is available at https://www.globenewswire.com/NewsRoom/AttachmentNg/4cbe723f-1de6-4d15-9c5e-490e953dd638 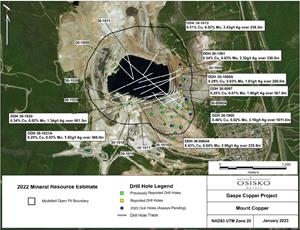