Use of this site indicates acceptance of the Privacy Policy and Terms of Use.
The information on this Website is not reliable and not intended to provide tax, legal, or investment advice. Nothing contained on the Website shall be considered a recommendation, solicitation, or offer to buy or sell a security to any person in any jurisdiction.
CEO.CA members discuss high-risk penny stocks which can lose their entire value. Only risk what you can afford to lose.
© 2016 - Pacific Website Company Inc.
@accesswire/anaconda-mining-commences-4000-metre-drill-program ↻
0 online
Today This week
Search Subscribe
Members of @accesswire/anaconda-mining-commences-4000-metre-drill-program

TORONTO, ON / ACCESSWIRE / March 11, 2021 / Anaconda Mining Inc. ("Anaconda" or the "Company") (TSX:ANX)(OTCQX:ANXGF) is pleased to announce the initiation of a 4,000 metre diamond drill program ("Drill Program") at its Point Rousse operation in Newfoundland. The Drill Program will include 1,000 metres of infill drilling at the Stog'er Tight Extension and will also include 3,000 metres of diamond drilling to test several priority targets which are within several kilometres of the Pine Cove Mill and in-pit tailings facility (Exhibit A).

The infill drill program at the Stog'er Tight Extension, at Camp Pond, aims to upgrade and define additional mineral resources adjacent to an internal conceptual open pit approximately 700 metres west of the past producing Stog'er Tight Mine and will guide ongoing environmental assessment studies associated with the permitting and development of this area. The 3,000 metres of exploration drilling will test several high priority exploration targets close to the milling operation, including Pumbly Point, Pine Cove East and Corkscrew Road (Exhibit A), which are the result of a re-evaluation of the near-mill opportunities in the Point Rousse area in light of the success at the Stog'er Tight Deposit.

The Pumbly Point target, in particular, includes a 1.2 kilometre strike of anomalous gold-in-soil and rocks, mapped alteration and coincident chargeability (IP geophysics) anomalies similar to other targets that have resulted in the discovery of gold deposits at Point Rousse (Exhibit B).

"We continue to outline and refine the recently discovered extension to the Stog'er Tight Deposit through infill drilling, which has the strong potential to extend the life of mine of the Point Rousse in the near-term. Based on the success of this discovery, we are launching a further 3,000 metre program to test other high priority targets within several kilometres of our Pine Cove Mill, notably at Pumbly Point which indicates the potential for mineralization along a 1.2 kilometre zone of anomalous gold indicators coincident with a geophysical anomaly. Our past discoveries at Point Rousse, namely at Stog'er Tight and Argyle, which each became producing mines, have displayed similar characteristics making these compelling exploration targets. The Point Rousse operation continues to generate free cash flow for the Company and is the engine to our growth strategy and we believe these targets have the potential to extend profitable mining at Point Rousse well into the future."

Gold mineralization at Stog'er Tight now extends at least 720 metres west, and south, of the past producing Stog'er Tight Mine, and represents the strike extension of the original Stog'er Tight Deposit. Mineralization now extends over a total strike length of approximately 1,250 metres. Gold mineralization is hosted within a shallowly northwest dipping, to locally sub-horizontal, gabbro sill and has been tested to a vertical depth of 115 metres. The Company will continue to update an in-house, non-National Instrument 43-101 ("NI43-101") compliant, resource estimate combining recent results with the previously announced NI43-101 compliant Mineral Resource Estimate for Stog'er Tight.

To facilitate potential development of the deposit west of the Stog'er Tight Mine, preliminary environmental studies have been initiated at Camp Pond, which is anticipated to be impacted by the potential development. Fox Pond, located east of Camp Pond, was similarly underlain by the Stog'er Tight Deposit which was successfully mined in 2018 and 2019 by partial dewatering of the pond under appropriate Provincial and Federal Government authorizations.

Anaconda Mining is a TSX and OTCQX-listed gold mining, development, and exploration company, focused in the top-tier Canadian mining jurisdictions of Newfoundland and Nova Scotia. The Company is advancing the Goldboro Gold Project in Nova Scotia, a significant growth project with Measured and Indicated Mineral Resources of 1.9 million ounces (16.0 million tonnes at 3.78 g/t) and Inferred Mineral Resources of 0.8 million ounces (5.3 million tonnes at 4.68 g/t) (Please see ANX Press Release dated February 22, 2021), and which is the subject to an ongoing feasibility study. Anaconda also operates mining and milling operations in the prolific Baie Verte Mining District of Newfoundland which includes the fully-permitted Pine Cove Mill, tailings facility and deep-water port, as well as ~15,000 hectares of highly prospective mineral property, including those adjacent to the past producing, high-grade Nugget Pond Mine at its Tilt Cove Gold Project.

This news release contains "forward-looking information" within the meaning of applicable Canadian and United States securities legislation. Generally, forward-looking information can be identified by the use of forward-looking terminology such as "plans", "expects", or "does not expect", "is expected", "budget", "scheduled", "estimates", "forecasts", "intends", "anticipates", or "does not anticipate", or "believes" or variations of such words and phrases or state that certain actions, events or results "may", "could", "would", "might", or "will be taken", "occur", or "be achieved". Forward-looking information is based on the opinions and estimates of management at the date the information is made, and is based on a number of assumptions and is subject to known and unknown risks, uncertainties and other factors that may cause the actual results, level of activity, performance or achievements of Anaconda to be materially different from those expressed or implied by such forward-looking information, including risks associated with the exploration, development and mining such as economic factors as they effect exploration, future commodity prices, changes in foreign exchange and interest rates, actual results of current production, development and exploration activities, government regulation, political or economic developments, environmental risks, permitting timelines, capital expenditures, operating or technical difficulties in connection with development activities, employee relations, the speculative nature of gold exploration and development, including the risks of diminishing quantities of grades of resources, contests over title to properties, and changes in project parameters as plans continue to be refined as well as those risk factors discussed in Anaconda's annual information form for the year ended December 31, 2019, available on www.sedar.com. Although Anaconda has attempted to identify important factors that could cause actual results to differ materially from those contained in forward-looking information, there may be other factors that cause results not to be as anticipated, estimated or intended. There can be no assurance that such information will prove to be accurate, as actual results and future events could differ materially from those anticipated in such information. Accordingly, readers should not place undue reliance on forward-looking information. Anaconda does not undertake to update any forward-looking information, except in accordance with applicable securities laws. 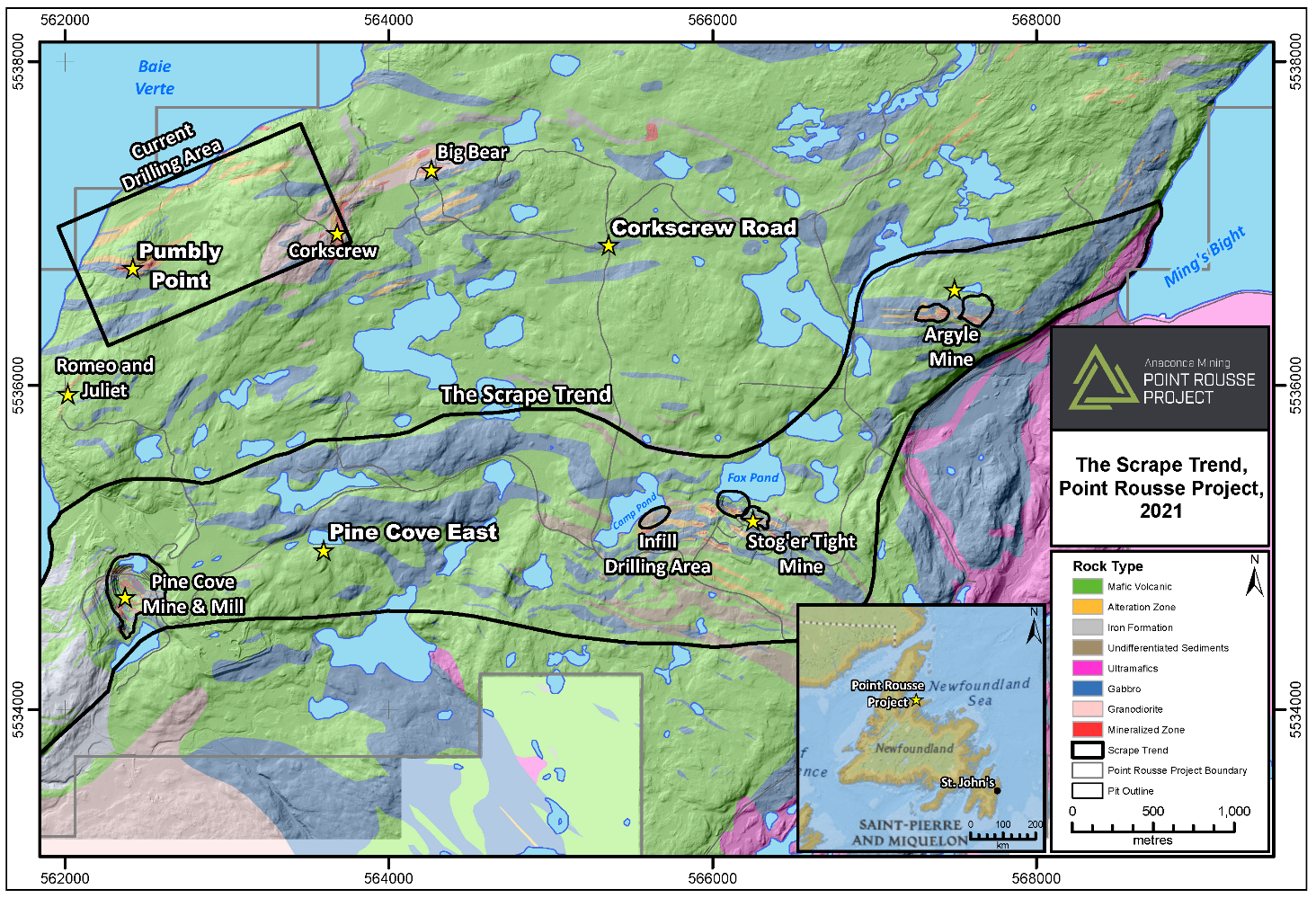 Exhibit A. A map showing the location of exploration targets of interest at Point Rousse including Pumbly Point, Pine Cove East and Corkscrew Road. 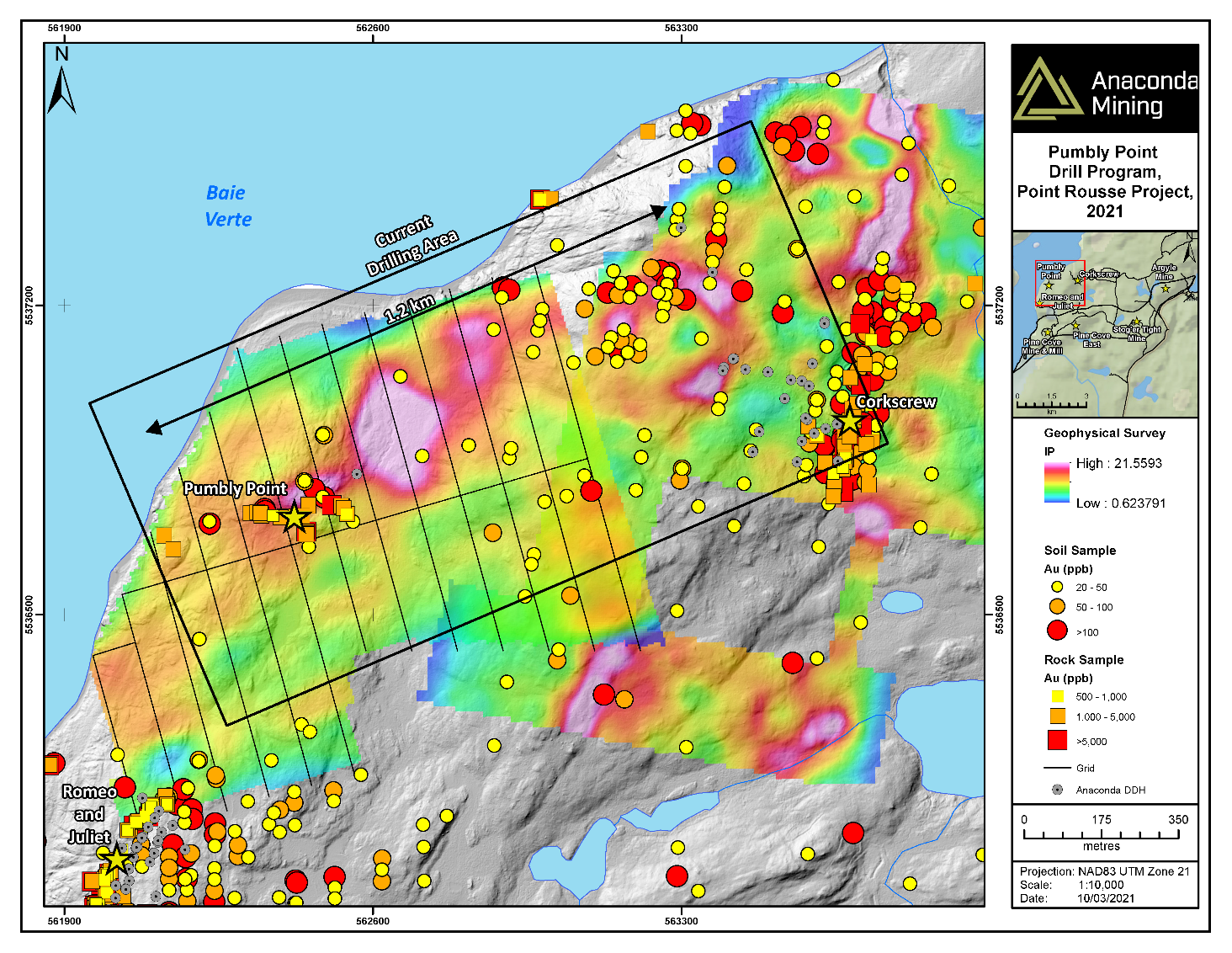 Exhibit B. A map showing the location of the Pumbly Point Exploration target at Point Rousse and illustrating a 1.2 km strike of coincident gold in soil anomalies, mineralized rock samples, mapped alteration and IP chargeability anomalies.