Use of this site indicates acceptance of the Privacy Policy and Terms of Use.
The information on this Website is not reliable and not intended to provide tax, legal, or investment advice. Nothing contained on the Website shall be considered a recommendation, solicitation, or offer to buy or sell a security to any person in any jurisdiction.
CEO.CA members discuss high-risk penny stocks which can lose their entire value. Only risk what you can afford to lose.
© 2016 - Pacific Website Company Inc.
@accesswire/anaconda-mining-expands-the-stoger-tight-deposit ↻
0 online
Today This week
Search Subscribe
Members of @accesswire/anaconda-mining-expands-the-stoger-tight-deposit

TORONTO, ON / ACCESSWIRE / July 7, 2020 / Anaconda Mining Inc. ("Anaconda" or the "Company") (TSX:ANX)(OTCQX:ANXGF) is pleased to announce initial results of an ongoing drill program (the "Drill Program") along strike from the Stog'er Tight Mine and Deposit ("Stog'er Tight"), located approximately three (3) kilometres east of the Company's operating Pine Cove Mill and tailings facility in Newfoundland (Exhibit A). The Drill Program comprises 1,354-metres in 26 diamond drill holes (BN-19-293 to 302 and BN-20-303 to 318) and 329 metres in 27 percussion drill holes (BNP-19-164 to BNP-20-190). The Drill Program was initiated to extend the previously mined Stog'er Tight Deposit and associated gold-mineralized alteration system westward, since previous exploration work indicated that the Stog'er Tight Deposit remained open for expansion (Exhibit B).

Highlights of the Drill Program include:

Selected intersections from the Drill Program at Stog'er Tight are shown in Tables 1 and 2 below. Assays are pending for an additional 16 drill holes (BN-20-319 to 334) completed to date and will be released once assays have been received and reviewed.

"We are pleased to discover that the gold system at the Stog'er Tight Mine not only continues westward by 650 metres along strike, but also includes shallow zones of high-grade, thick mineralization. This new discovery coupled with the associated geophysical footprint could indicate that the zone continues northward down-dip for 250 metres. A second geophysical anomaly with the same orientation is located 250 metres to the southwest and is also associated with high-grade surface mineralization identified in historical channel samples. Further, our observations of the style of mineralization indicates that it is very similar to both the Stog'er Tight and Argyle gold deposits. Based on the success of this Drill Program we are initiating a further 1,500 metres of diamond drilling to test the down-dip extension of the gold mineralization as well as testing the second geophysical anomaly along strike with the goal of expanding the Stog'er Tight Deposit for future development. We look forward to announcing the remaining results from this program followed by updates on the new drilling which will commence shortly."

The results of the Drill Program indicate that a significant zone of gold mineralization extends at least 650 metres west of, and represents a strike extension of, the Stog'er Tight Mine sequence. Mineralization at Stog'er Tight now extends over a total strike length of 1,200 metres and is open along strike to the southwest and down-dip on its western half. Gold mineralization is hosted within a shallowly northwest dipping gabbro sill and is tested to a vertical depth of 75 metres. The highest grades and thicknesses intersected thus far are associated with a geophysical anomaly (IP chargeability high associated with all gold deposits at Point Rousse) that extends 250 metres northward, parallel with a similar IP anomaly associated with the Stog'er Tight Deposit. A second IP chargeability anomaly, of similar extent and associated with surface gold mineralization, is located 250 metres further southwest along strike, highlighting additional potential for expansion (Exhibit C). Both geophysical anomalies trend beneath a shallow pond (generally less than a few metres) known as Camp Pond (Exhibit B and C). Fox Pond, located east of Camp Pond, was similarly underlain by the Stog'er Tight Deposit which was successfully mined in 2018 and 2019 by partial dewatering of the pond under appropriate Provincial and Federal Government permits.

All samples and the resultant composites referred to in this release were collected using QA/QC protocols including the regular insertion of certified standards and blanks within each sample batch sent for analysis and completion of check assays of select samples. Diamond drill core and percussion samples were analyzed for Au at Eastern Analytical Ltd. in Springdale, NL ("Eastern"), using standard fire assay (30 g) pre-concentration and Atomic Absorption finish methods. Eastern is a fully accredited firm within the meaning of NI 43-101 for provision of this service.

Percussion drilling was conducted using a Sandvik percussion drill rig with a 4 inch bore. Dry cuttings returned from the drill were collected every 0.9 metres of drilling from a plastic pail using a scoop holding approximately 1-2 kg sample. Percussion cuttings include a variety of size fractions of pulverized rock. An analysis of 9 pairs of twinned diamond drill holes and percussion holes within 12 metres of each other showed a strong correlation between grade and width of the mineralized zone.

This news release contains "forward-looking information" within the meaning of applicable Canadian and United States securities legislation. Generally, forward-looking information can be identified by the use of forward-looking terminology such as "plans", "expects", or "does not expect", "is expected", "budget", "scheduled", "estimates", "forecasts", "intends", "anticipates", or "does not anticipate", or "believes" or variations of such words and phrases or state that certain actions, events or results "may", "could", "would", "might", or "will be taken", "occur", or "be achieved". Forward-looking information is based on the opinions and estimates of management at the date the information is made, and is based on a number of assumptions and is subject to known and unknown risks, uncertainties and other factors that may cause the actual results, level of activity, performance or achievements of Anaconda to be materially different from those expressed or implied by such forward-looking information, including risks associated with the exploration, development and mining such as economic factors as they effect exploration, future commodity prices, changes in foreign exchange and interest rates, actual results of current production, development and exploration activities, government regulation, political or economic developments, environmental risks, permitting timelines, capital expenditures, operating or technical difficulties in connection with development activities, employee relations, the speculative nature of gold exploration and development, including the risks of diminishing quantities of grades of resources, contests over title to properties, and changes in project parameters as plans continue to be refined as well as those risk factors discussed in Anaconda's annual information form for the year ended December 31, 2019, available on www.sedar.com. Although Anaconda has attempted to identify important factors that could cause actual results to differ materially from those contained in forward-looking information, there may be other factors that cause results not to be as anticipated, estimated or intended. There can be no assurance that such information will prove to be accurate, as actual results and future events could differ materially from those anticipated in such information. Accordingly, readers should not place undue reliance on forward-looking information. Anaconda does not undertake to update any forward-looking information, except in accordance with applicable securities laws. 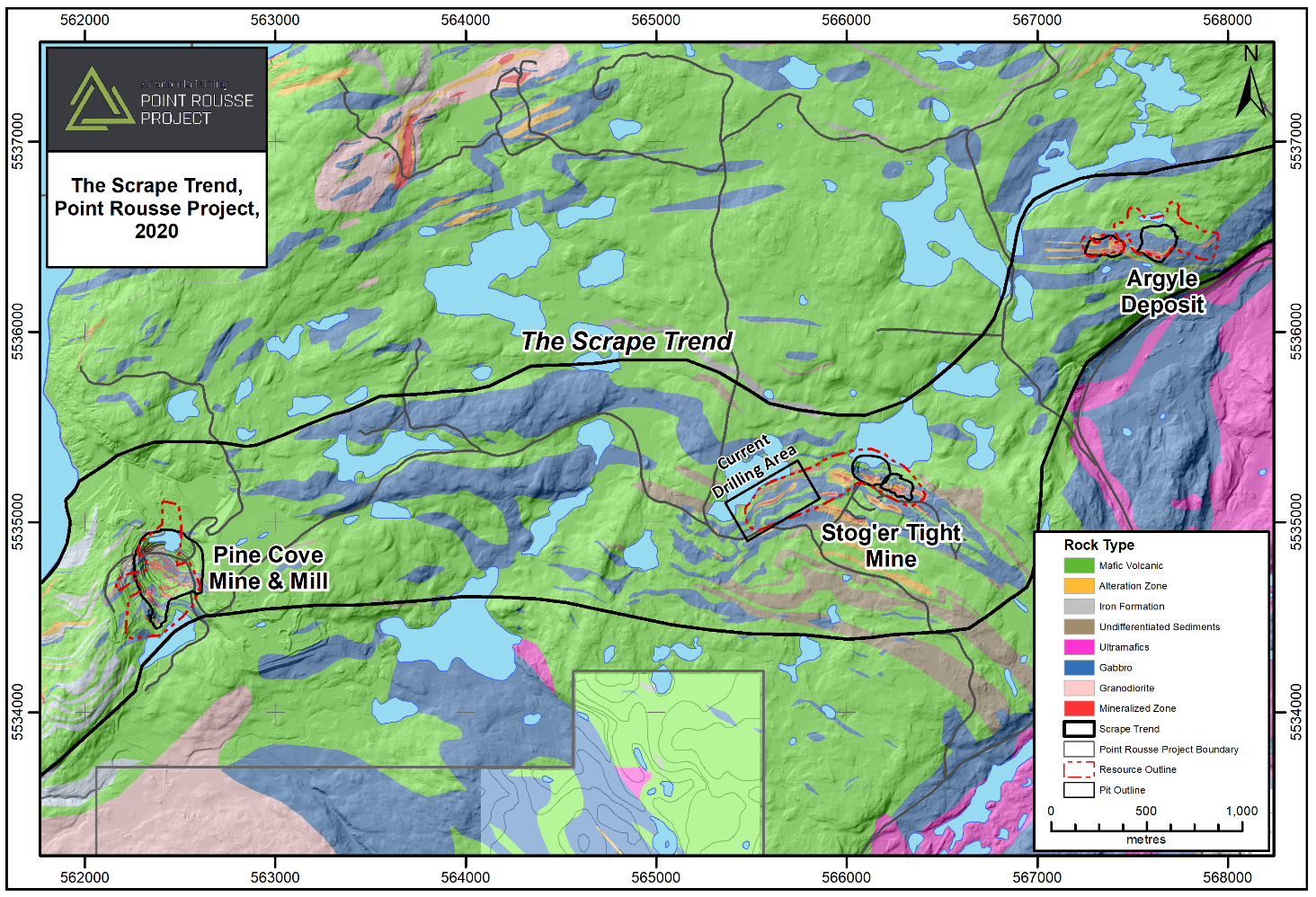 Exhibit A. A map showing the location of the Stog'er Tight Deposit in the central part of the Scrape Trend; A geological trend that is host to the Stog'er Tight Mine, Argyle Deposit and Pine Cove Mine and Mill Complex, Point Rousse Project. 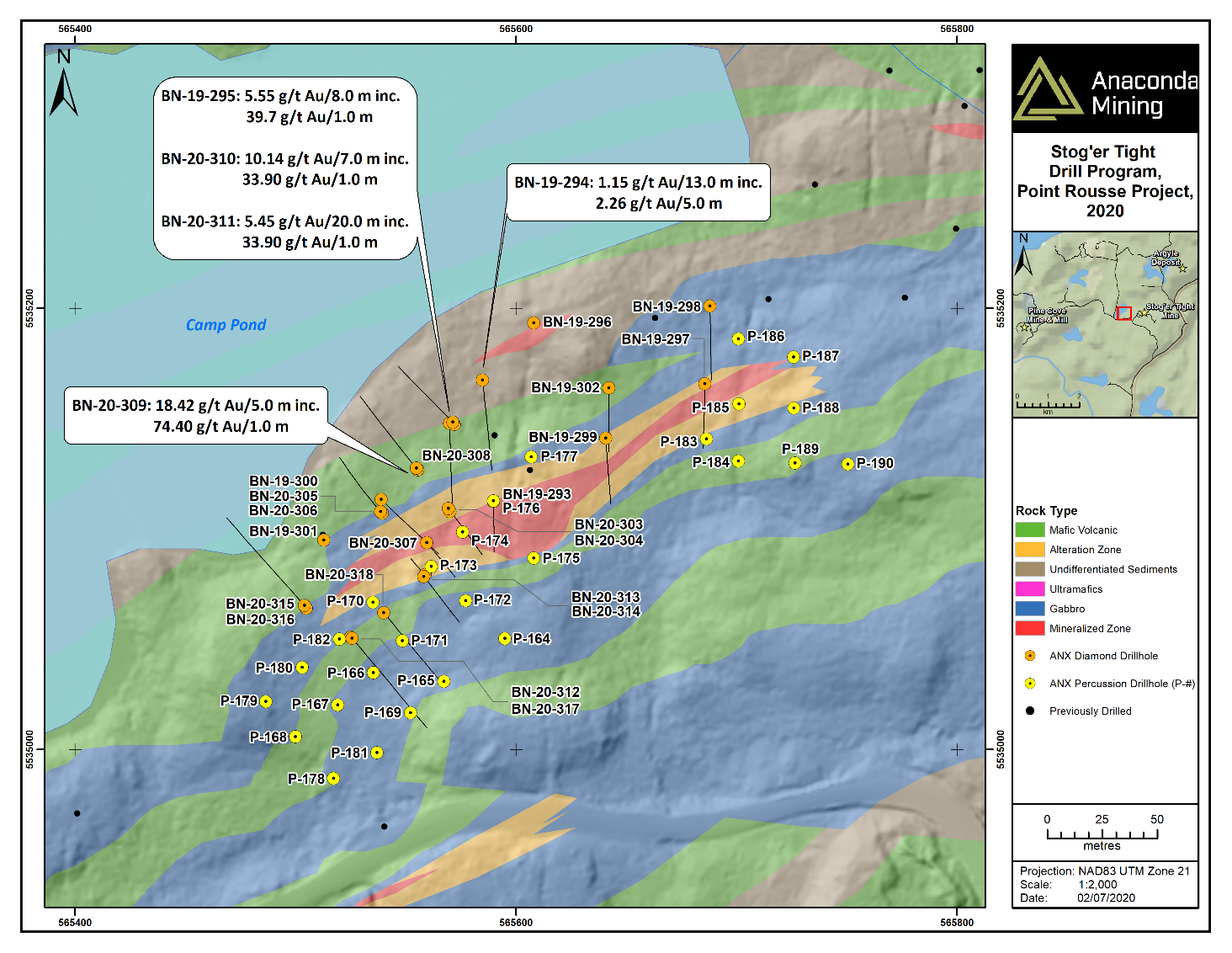 Exhibit B. A map showing the location of diamond and percussion drill holes completed during the Drill Program referenced in the press release with highlight assays. 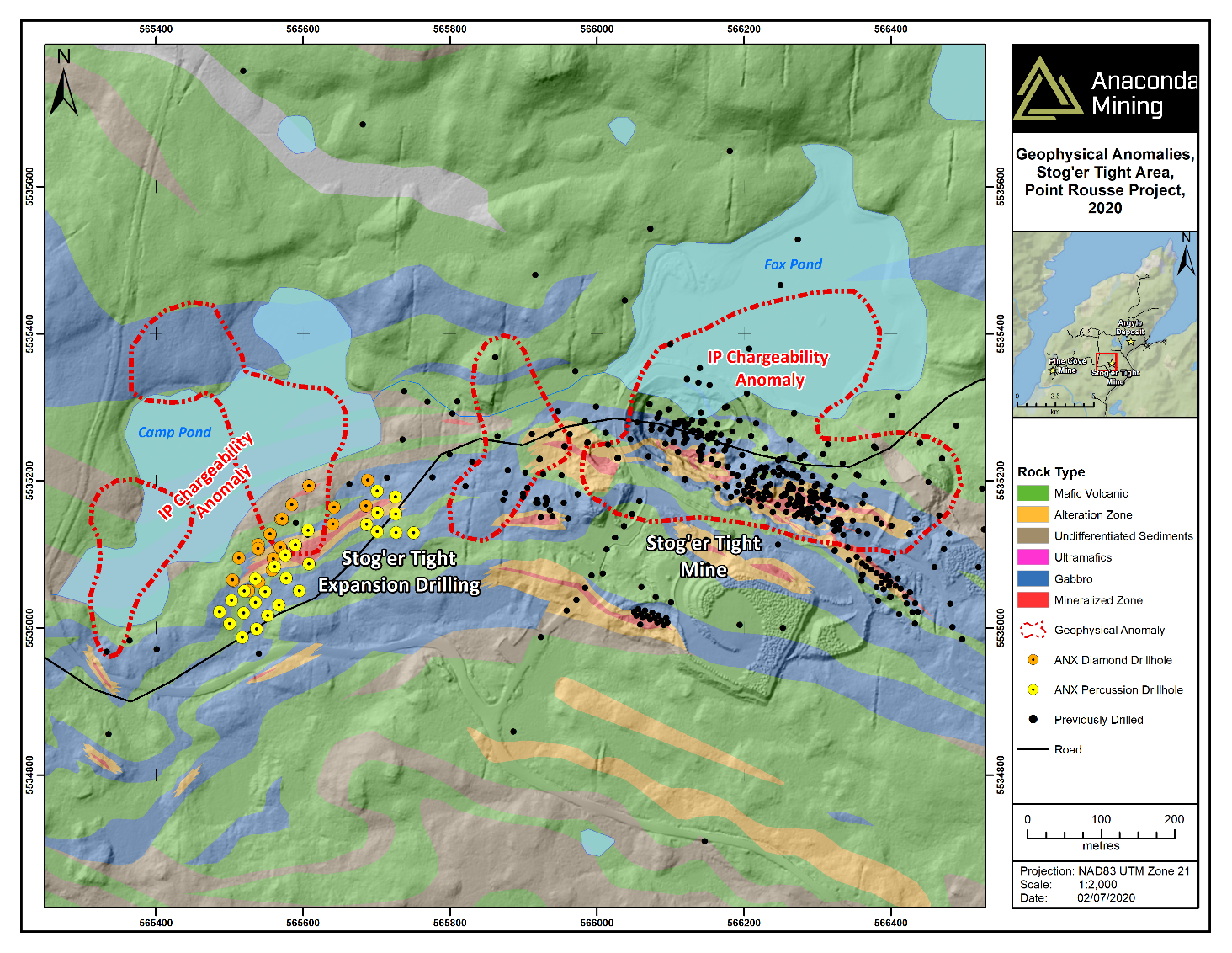 Exhibit C. A map showing the location of the Stog'er Tight Deposit, the area of the recent Drill Program and the IP geophysical anomalies and exploration targets. The location of Camp Pond and Fox Pond and associated IP anomalies are also shown.