Use of this site indicates acceptance of the Privacy Policy and Terms of Use.
The information on this Website is not reliable and not intended to provide tax, legal, or investment advice. Nothing contained on the Website shall be considered a recommendation, solicitation, or offer to buy or sell a security to any person in any jurisdiction.
CEO.CA members discuss high-risk penny stocks which can lose their entire value. Only risk what you can afford to lose.
© 2021 - CEO.CA Technologies Ltd.
@accesswire/anaconda-mining-initiates-9500-metre-drill-program ↻
0 online
Today This week
Search Subscribe
Members of @accesswire/anaconda-mining-initiates-9500-metre-drill-program

TORONTO, ON / ACCESSWIRE / February 27, 2020 / Anaconda Mining Inc. ("Anaconda" or the "Company") (TSX:ANX) (OTCQX:ANXGF) is pleased to announce a 9,500 metre drill program on priority exploration targets at the Tilt Cove Gold Project ("Tilt Cove") and the Point Rousse Project ("Point Rousse") (the "Winter Exploration Program"). Both projects are located within the Baie Verte Mining District in Newfoundland, and benefit from proximity to the Company's operating Pine Cove Mill and permitted in-pit tailings facility.

The Winter Exploration Program will comprise a combination of 8,000 metres of diamond drilling and 1,500 metres of percussion drilling, including:

"Our exploration strategy is to discover high-grade resources in the Baie Vert Mining District and leverage our Pine Cove Mill and permitted tailings capacity. The Winter Exploration Program at Tilt Cove provides a unique opportunity to efficiently drill test high-grade targets at West Pond, East Pond and Red Cliff Pond by drilling from the frozen ponds. These untested targets, which are coincident with the Nugget Pond Horizon, cover a cumulative 3.3 kilometres of strike extent that is largely covered by ponds. Each of these targets have similar geological and geophysical signatures to the nearby high-grade Nugget Pond Mine. At Point Rousse, we believe there continues to be opportunity to extend the mine life of our operations, and drilling will be focused on infill and expansion of mineral resources at the Argyle Deposit and the Pine Cove Mine. We will also be testing the potential for discoveries at the 278 Zone near the Stog'er Tight Mine and Pine Cove East, all proximal to the Pine Cove Mill."

The Tilt Cove Project is a significant, recently consolidated land package encompassing the same geological trend as the past producing, high-grade Nugget Pond Mine, which had an average recovered grade of 9.85 grams per tonne ("g/t") gold. Tilt Cove covers a 20-kilometre strike extent of the Betts Cove Complex, a highly prospective geological terrane that includes the Nugget Pond Horizon ("NPH"). The NPH is an iron-rich sedimentary unit that hosts the past-producing Nugget Pond Mine (Exhibit A) and is located approximately 45 kilometres east of the Pine Cove Mine and Mill Complex.

The Winter Exploration Program follows the initial trenching and drilling announced on November 27, 2019. This short program included trenching and 371 metres of diamond drilling in five holes at the Growler Showing and was cut short due to weather constraints and site conditions. Results from this initial program are expected to be available in Q1 of 2020.

Priority targets to be tested by 4,000 metres of diamond drilling at Tilt Cove include:

The Point Rousse Project includes the prospective gold trend know as the Scrape Trend, which includes three deposits at Pine Cove, Stog'er Tight, Argyle, in addition to numerous prospects and showings, all located within eight kilometres of the operating Pine Cove Mill. Anaconda has been mining at the Pine Cove Mine continuously for more than 10 years and has developed significant mining infrastructure including the Pine Cove Mill, an in-pit tailings facility with a 15-year life at current throughput rates, and a deep-water port.

Priority targets to be tested by 4,000 metres of diamond drilling and 1,500 metres of percussion drilling within the Scrape Trend of the Point Rousse Project include:

Grab samples and composited assays from historical drill core are compiled from historic reports and data filed with the Department of Natural Resources, Newfoundland and Labrador. Sufficient work has not been completed by Anaconda geologists and QPs to verify the validity of these composited assays.

This news release contains "forward-looking information" within the meaning of applicable Canadian and United States securities legislation. Generally, forward-looking information can be identified by the use of forward-looking terminology such as "plans", "expects", or "does not expect", "is expected", "budget", "scheduled", "estimates", "forecasts", "intends", "anticipates", or "does not anticipate", or "believes" or variations of such words and phrases or state that certain actions, events or results "may", "could", "would", "might", or "will be taken", "occur", or "be achieved". Forward-looking information is based on the opinions and estimates of management at the date the information is made, and is based on a number of assumptions and is subject to known and unknown risks, uncertainties and other factors that may cause the actual results, level of activity, performance or achievements of Anaconda to be materially different from those expressed or implied by such forward-looking information, including risks associated with the exploration, development and mining such as economic factors as they effect exploration, future commodity prices, changes in foreign exchange and interest rates, actual results of current production, development and exploration activities, government regulation, political or economic developments, environmental risks, permitting timelines, capital expenditures, operating or technical difficulties in connection with development activities, employee relations, the speculative nature of gold exploration and development, including the risks of diminishing quantities of grades of resources, contests over title to properties, and changes in project parameters as plans continue to be refined as well as those risk factors discussed in Anaconda's annual information form for the year ended December 31, 2018, available on www.sedar.com. Although Anaconda has attempted to identify important factors that could cause actual results to differ materially from those contained in forward-looking information, there may be other factors that cause results not to be as anticipated, estimated or intended. There can be no assurance that such information will prove to be accurate, as actual results and future events could differ materially from those anticipated in such information. Accordingly, readers should not place undue reliance on forward-looking information. Anaconda does not undertake to update any forward-looking information, except in accordance with applicable securities laws. 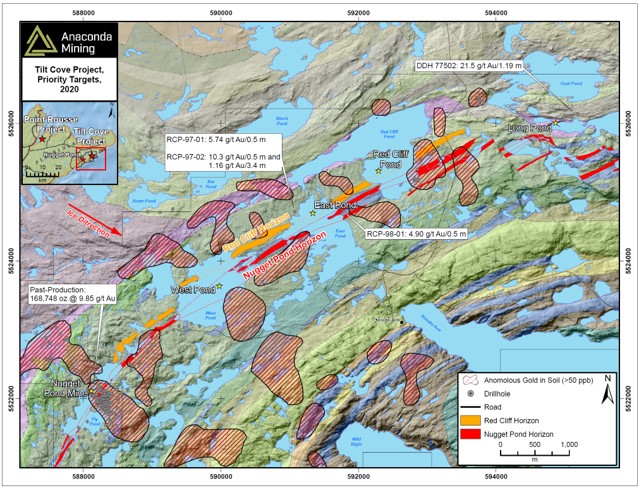 Exhibit A. A map showing the location of high priority exploration targets including the West Pond, East Pond, Red Cliff Pond and Long Pond. Gold-in-soil anomalies are shown in black polygons and are located down-ice (southeast) of the Nugget Pond and Red Cliff Horizons where drill target areas at West Pond and Redcliff Pond are located. The Nugget Pond Deposit was situated immediately up-ice of a similar gold-in-soil anomaly. 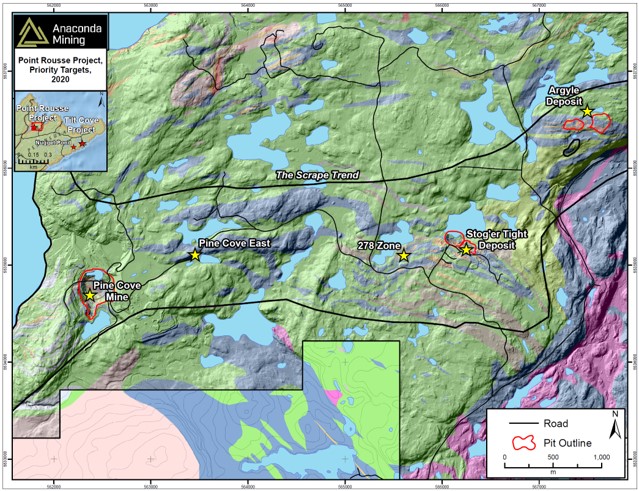 Exhibit B. A map showing the location of high priority exploration targets including the Argyle, 278 Zone (Stog'er Tight Mine), Pine Cove and Pine Cove East targets.