Use of this site indicates acceptance of the Privacy Policy and Terms of Use.
The information on this Website is not reliable and not intended to provide tax, legal, or investment advice. Nothing contained on the Website shall be considered a recommendation, solicitation, or offer to buy or sell a security to any person in any jurisdiction.
CEO.CA members discuss high-risk penny stocks which can lose their entire value. Only risk what you can afford to lose.
© 2022 - CEO.CA Technologies Ltd.
@accesswire/anaconda-mining-intersects-273-gt-gold-over-65-metres ↻
0 online
Today This week
Search Subscribe
Members of @accesswire/anaconda-mining-intersects-273-gt-gold-over-65-metres

TORONTO, ON / ACCESSWIRE / January 13, 2022 / Anaconda Mining Inc. ("Anaconda" or the "Company") (TSX:ANX) (OTCQX:ANXGF) is pleased to announce final results from an infill diamond drill program (the "Infill Drill Program") completed at the Company's 100%-owned Goldboro Gold Project ("Goldboro", or the "Project") located in the Municipality of the District of Guysborough, Nova Scotia. The Infill Drill Program was designed to upgrade both near-surface and underground Inferred Mineral Resources in an area between the two open pits outlined in the Feasibility Study for Goldboro announced on December 16, 2021. The drill program comprised 19 drill holes totaling 2,585.0 metres (BR-21-290 to 308). Assay results have been received for the final 9 drill holes (BR-21-300 to 308) (Exhibit A) of the Infill Drill Program, with assays for the first 10 drill holes (BR-21-290 to 299) reported in a news release dated October 12, 2021.

The Infill Drill Program successfully intersected several new zones of near-surface gold mineralization on the northern side of the Goldboro Deposit between the two proposed open pits, over a strike length of 200 metres, as well as infilled deeper sections of the Goldboro Deposit (Exhibits A, B, C). The new near-surface mineralized zones were not included within the Mineral Resource Estimate announced on December 16, 2021, and present near-term potential to upgrade both near surface and underground Inferred Mineral Resources, further optimize the pit design outlined in the Feasibility Study, reduce the strip ratio, and positively impact the value of the Project. Successful intersection and infill drilling of deeper, underground Inferred Mineral Resource further highlights the potential for an underground mining phase for the Project. Only 5 of the 19 drill holes completed in this program were included in the recent Mineral Resource Estimate update with the remainder to contribute to future updates.

Selected composited highlights (core length) from the drill program include:

"This infill drill program and the related results highlight the tremendous potential that continues to exist for the Goldboro Gold Project. Since acquiring the Project in 2017, we have grown the deposit significantly, culminating in the recent Mineral Resource Estimate update which demonstrates a combined open pit and underground Measured and Indicated Mineral Resource of 2,581,000 ounces and a combined open pit and underground Inferred Mineral Resource of 484,000 ounces. In the fall 2021 we recognized an opportunity to target and potentially upgrade inferred near-surface and underground mineral resources in the area between the two open pits outlined in the Goldboro Feasibility Study. Several new zones of near surface mineralization were encountered within and between the two open pits over a strike length of 200 metres, demonstrating the potential to upgrade near-surface Inferred Resources and reduce the strip ratio. The assay results from the drill program also show continuity of high-grade gold within broader mineralized envelopes within the underground resource, indicating the potential to further upgrade underground Mineral Resources. Looking ahead to the new year, we are excited to commence further drill programs to both upgrade and expand the Goldboro Mineral Resource, which has the near-term potential to further increase value to what is already a robust, economically valuable Project."

1 Refer to Non-IFRS Financial Measures below.

The Mineral Resource Estimate presented was prepared by Independent Qualified Person Glen Kuntz, P. Geo., of Nordmin Engineering Ltd. The Mineral Resource Estimate is based on validated results of 681 surface and underground drill holes for a total of 121,540 metres of diamond drilling completed between 1984 and the effective date of November 15, 2021, including 55,803 metres conducted by Anaconda.

Table of selected composites from the Goldboro Drill Program

The Company has critically considered logistical matters given the ongoing COVID-19 pandemic, to ensure that this Drill Program and any other programs are executed in a way that ensures the absolute health and safety of our personnel, contractors, and the communities where we operate.

All samples and the resultant composites referred to in this release are collected using QA/QC protocols including the regular insertion of standards and blanks within the sample batch for analysis and check assays of select samples. All samples quoted in this release were analyzed at Eastern Analytical Ltd. in Springdale, NL, for Au by fire assay (30 g) with an AA finish.

All assays in this press release are reported as fire assays only. For samples analyzing greater than 0.5 g/t Au via 30 g fire assay, these samples will be re-analyzed at Eastern Analytical Ltd. via total pulp metallics. For the total pulp metallics analysis, the entire sample is crushed to -10mesh and pulverized to 95% -150mesh. The total sample is then weighed and screened to 150mesh. The +150mesh fraction is fire assayed for Au, and a 30 g subsample of the -150mesh fraction analyzed via fire assay. A weighted average gold grade is calculated for the final reportable gold grade. Total pulp metallics assays for drillholes sited within this press release may be updated in a future news release.

The Drill Program is funded using existing flow through funds but has also benefited from a grant received from the Government of Nova Scotia through a Mineral Resources Development Fund, shared funding exploration grant MRDF-2021-SF-11.

Kevin Bullock, P.Eng., President and Chief Executive Officer of Anaconda, and Paul McNeill, P. Geo., VP Exploration of Anaconda, are "Qualified Person(s)" as such term is defined under NI 43-101 Standards for Disclosure for Mineral Projects and have each reviewed and approved the scientific and technical information and data included in this press release. A version of this press release will be available in French on Anaconda's website (www.anacondamining.com) in two to three business days.

Anaconda has included certain non-IFRS performance measures as detailed below. In the gold mining industry, these are common performance measures but may not be comparable to similar measures presented by other issuers. The Company believes that, in addition to conventional measures prepared in accordance with IFRS, certain investors use this information to evaluate the Company's performance and ability to generate cash flow. Accordingly, it is intended to provide additional information and should not be considered in isolation or as a substitute for measures of performance prepared in accordance with IFRS.

Operating Cash Costs per Ounce of Gold - Anaconda calculates operating cash costs per ounce by dividing operating expenses, net of by-product revenue, by payable gold ounces. Operating expenses include mine site operating costs such as mining, processing and administration as well as selling costs and royalties, however, excludes depletion and depreciation and rehabilitation costs.

This news release contains "forward-looking information" within the meaning of applicable Canadian and United States securities legislation. Forward-looking information includes, but is not limited to, disclosure regarding the economics and project parameters presented in the PEA, including, without limitation, IRR, all-in sustaining costs, NPV and other costs and economic information, possible events, conditions or financial performance that is based on assumptions about future economic conditions and courses of action; the timing and costs of future development and exploration activities on the Company's projects; success of development and exploration activities; permitting time lines and requirements; time lines for further studies; planned exploration and development of properties and the results thereof; and planned expenditures and budgets and the execution thereof. Generally, forward-looking information can be identified by the use of forward-looking terminology such as "plans", "expects", or "does not expect", "is expected", "budget", "scheduled", "estimates", "forecasts", "intends", "anticipates", or "does not anticipate", or "believes" or variations of such words and phrases or state that certain actions, events or results "may", "could", "would", "might", or "will be taken", "occur", or "be achieved". Forward-looking information is based on the opinions and estimates of management at the date the information is made, and is based on a number of assumptions and is subject to known and unknown risks, uncertainties and other factors that may cause the actual results, level of activity, performance or achievements of Anaconda to be materially different from those expressed or implied by such forward-looking information, including the risks outlined in this news release, risks associated with the exploration, development and mining such as economic factors as they effect exploration, future commodity prices, changes in foreign exchange and interest rates, actual results of current production, development and exploration activities, government regulation, political or economic developments, environmental risks, permitting timelines, capital expenditures, operating or technical difficulties in connection with development activities, employee relations, the speculative nature of gold exploration and development, including the risks of diminishing quantities of grades of resources, contests over title to properties, and changes in project parameters as plans continue to be refined as well as those risk factors discussed in Anaconda's annual information form for the year ended December 31, 2020, available on www.sedar.com. Although Anaconda has attempted to identify important factors that could cause actual results to differ materially from those contained in forward-looking information, there may be other factors that cause results not to be as anticipated, estimated or intended. There can be no assurance that such information will prove to be accurate, as actual results and future events could differ materially from those anticipated in such information. Accordingly, readers should not place undue reliance on forward-looking information. The Company does not undertake to update any forward-looking information, except in accordance with applicable securities laws. 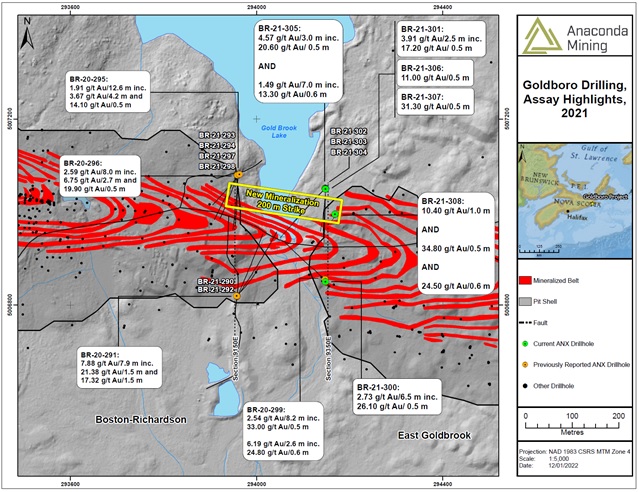 Exhibit A The location of the drill holes and selected assay composites reported from the full nineteen-hole drill program conducted between the western and eastern pit shells and showing the new mineralized zones intersected during the drill program. 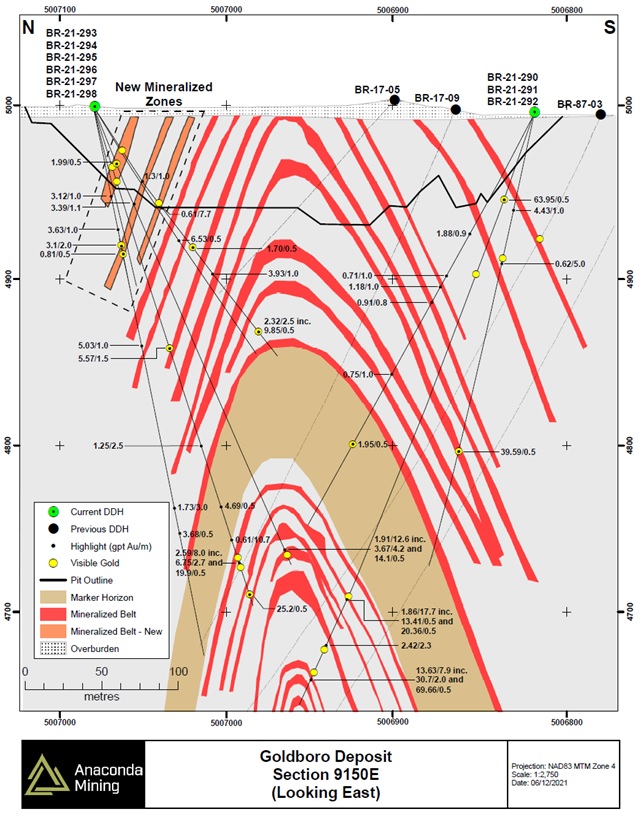 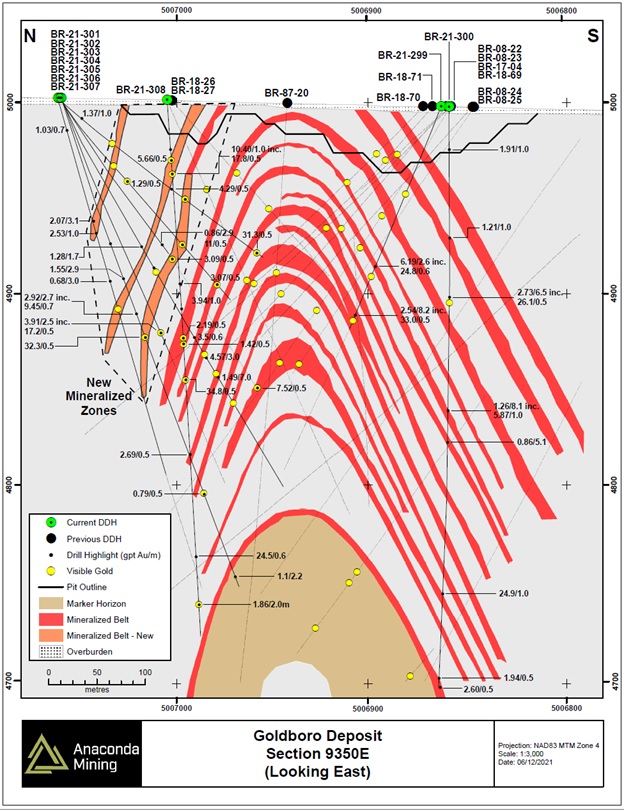