Use of this site indicates acceptance of the Privacy Policy and Terms of Use.
The information on this Website is not reliable and not intended to provide tax, legal, or investment advice. Nothing contained on the Website shall be considered a recommendation, solicitation, or offer to buy or sell a security to any person in any jurisdiction.
CEO.CA members discuss high-risk penny stocks which can lose their entire value. Only risk what you can afford to lose.
© 2022 - CEO.CA Technologies Ltd.
@accesswire/aston-bay-announces-additional-near-surface-copper ↻
0 online
Today This week
Search Subscribe
Members of @accesswire/aston-bay-announces-additional-near-surface-copper

TORONTO, ON / ACCESSWIRE / August 25, 2022 / Aston Bay Holdings Ltd. (TSXV:BAY)(OTCQB:ATBHF) ("Aston Bay" or the "Company") is pleased to announce visual results from three more diamond drill holes at the Company's high-grade Storm Copper Project ("Storm" or the "Project") on Somerset Island, Nunavut. This is the maiden drilling program for American West Metals Limited ("American West"), who are the project operator, since entering an option agreement with Aston Bay in March 2021.

"Drilling at the 2750N Zone continues to impress the team, with thick intervals of copper mineralization near the surface in every drill hole," stated Thomas Ullrich, CEO of Aston Bay. "This gives us confidence in the continuity of the mineralization and the exploration potential for more, in an area where we are working with our partner American West to define a shallow copper resource that can support a low cost, small footprint direct shipping product mining operation. Together with the exciting discovery of a zone of stratiform ‘sediment hosted style' of copper mineralization announced earlier this week, this has been an outstanding drill program and a real game changer for the Storm project." 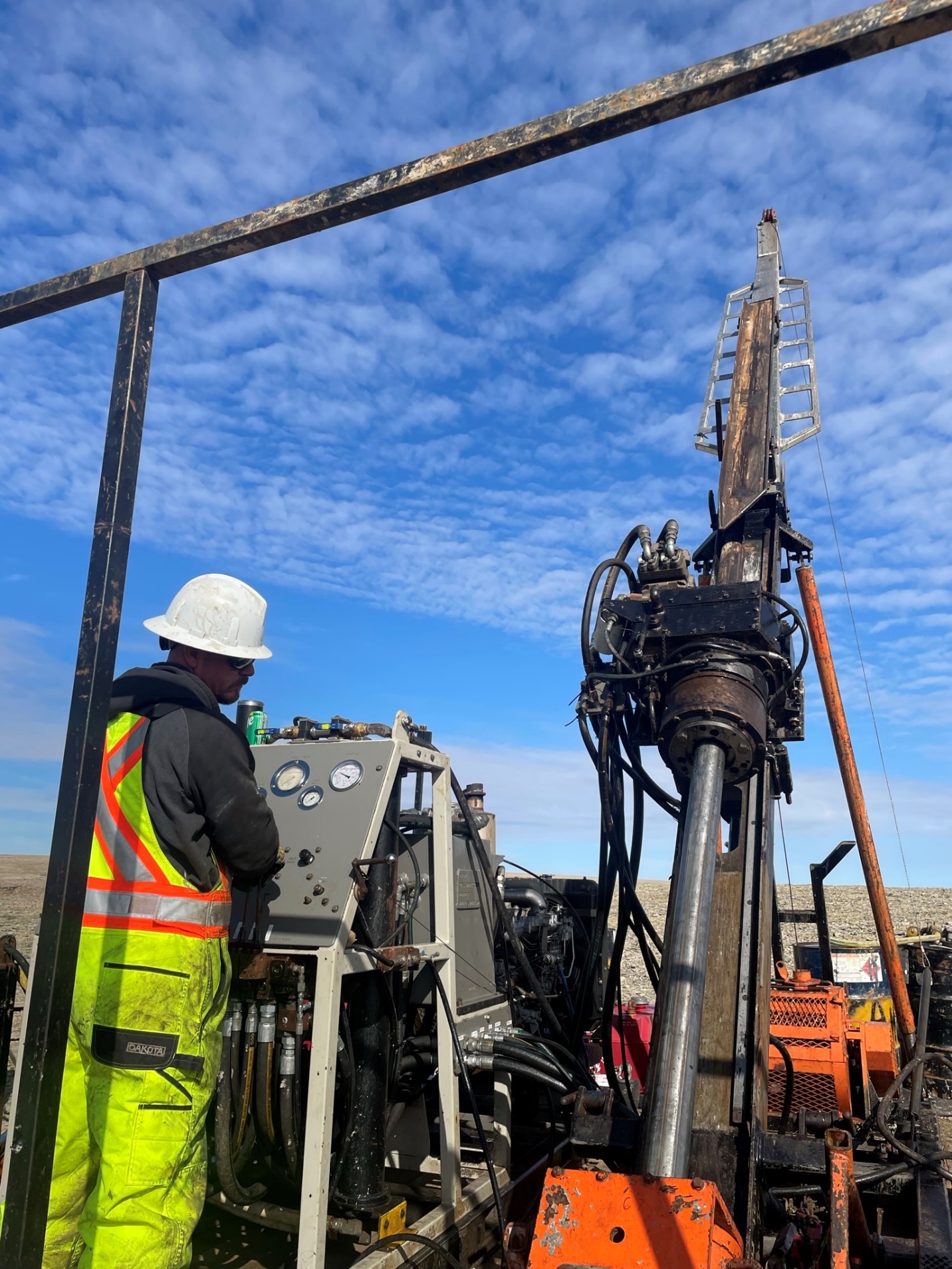 Figure 1: Diamond drilling underway at the 2750N Zone where further outstanding intervals of near surface copper mineralization have been encountered.

Drill holes ST22-07 and ST22-08 have been completed at the 2750N Zone and have successfully intersected further thick zones of breccia and massive sulfides (mostly chalcocite) hosted within much broader intervals of vein and fracture style copper mineralization.

A total of 997 metres (m) of drilling has been completed to date on the shallow and high-grade 2750N Zone, with the drilling continuing to confirm the outstanding continuity and thickness of the ore system (Figure 2). The latest drill holes have failed to close off the mineralization which remains open along strike to the east and west, and at depth.

The mineralization encountered within the latest drill holes is visually similar to the previous drilling with chalcocite being the dominant mineral, and with chalcopyrite, bornite, cuprite and minor oxides being present within certain intervals. 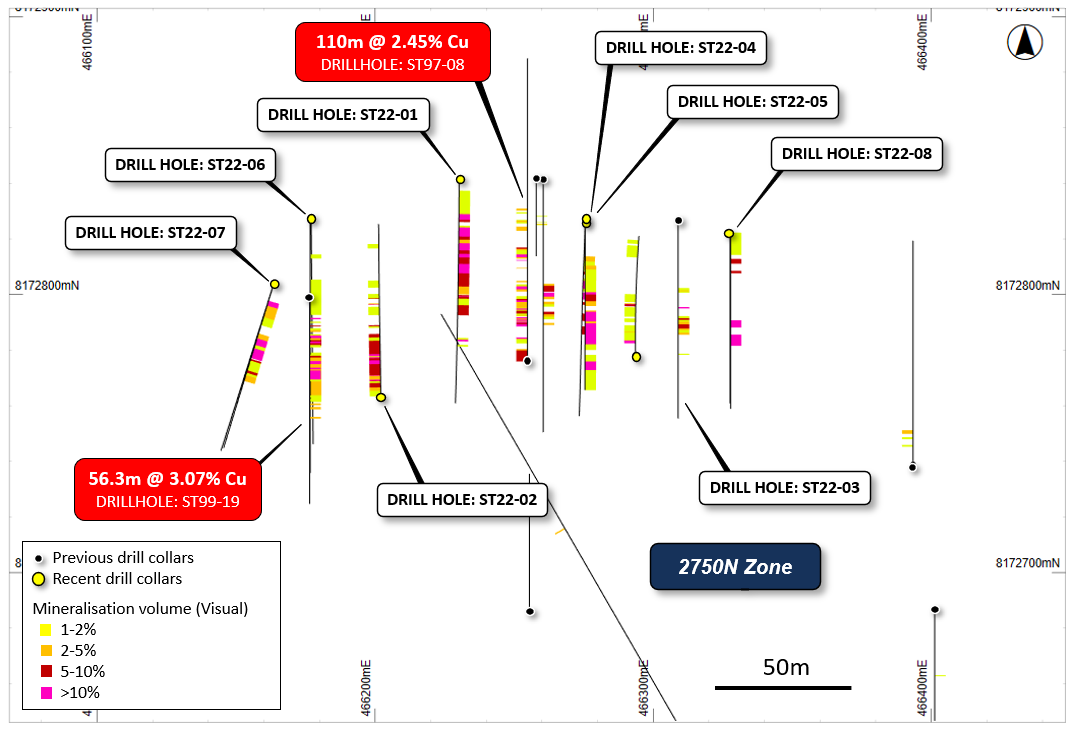 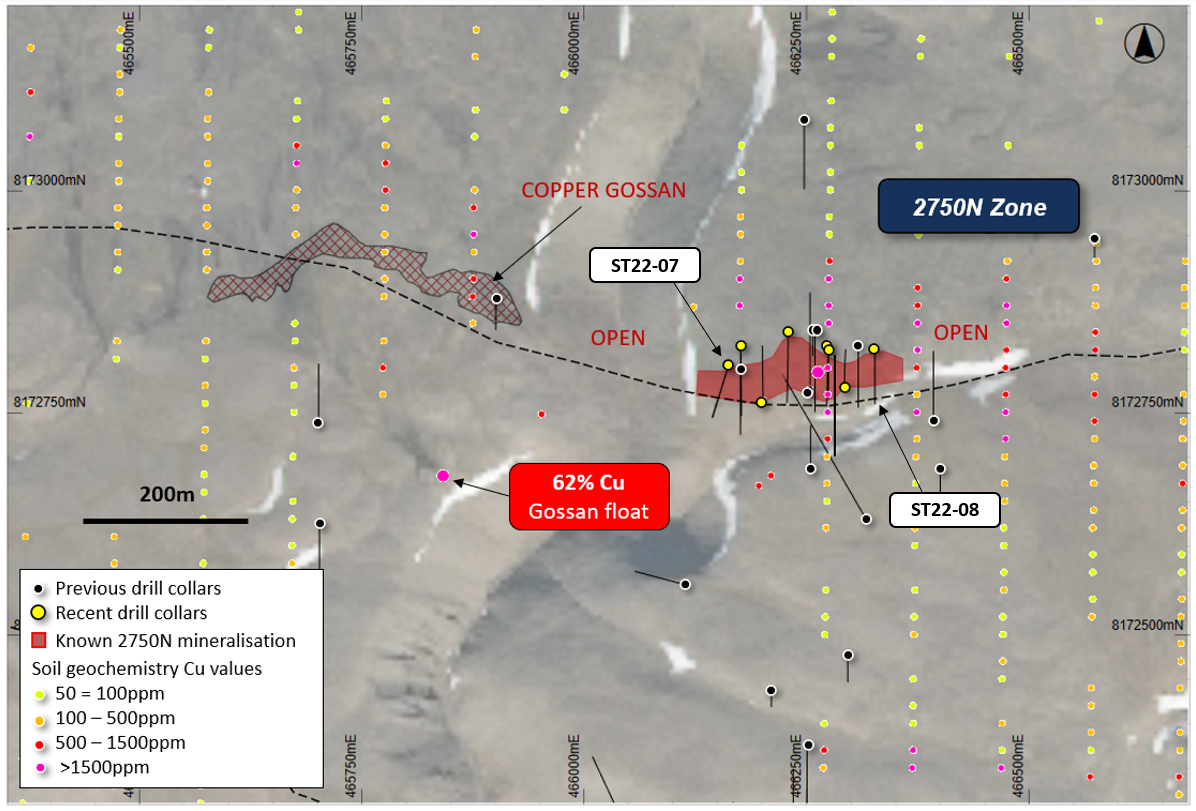 ST22-07 was drilled to a downhole depth of 101m to the west of historical drill hole ST99-19 (56.3m* @ 3.07% Cu from 12.2m). The drill hole intersected thick intervals of strong visual mineralization. Importantly, there is no drilling to the west of ST22-07 and the 2750N Zone remains open in this direction towards a known copper gossan.

Table 1 summarises the mineralization as observed in ST22-07. Intersections are expressed as downhole widths and are interpreted to be close to true widths. Visual estimates of sulfide type, quantity and habit should not be considered a substitute for laboratory assays. Laboratory assays are required to determine the widths and grade of mineralization as reported in preliminary geological logging. 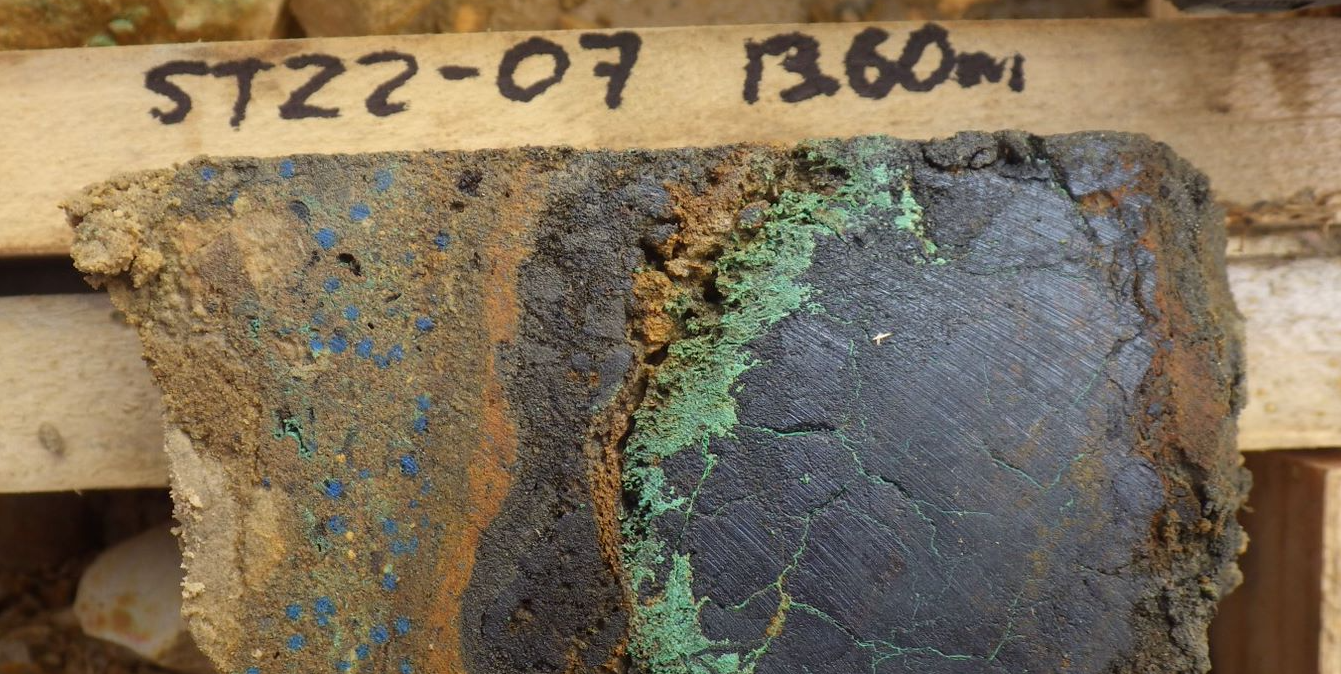 ST22-08 was drilled to a downhole depth of 107m and was designed to test the eastern extent of mineralization in the vicinity of historical drill hole ST99-22 (14.1m* @ 1.6% Cu from 44.3m). The mineralization encountered within ST22-08 appears much stronger than that in ST99-22, and is composed of massive and semi-massive copper sulfides, indicating a potential pinch and swell along the strike of the ore zone. There is no drilling along the projected strike of the 2750N Zone east of ST22-08.

Table 2 summarises the mineralization as observed in ST22-08. Intersections are expressed as downhole widths and are interpreted to be close to true widths. Visual estimates of sulfide type, quantity and habit should not be considered a substitute for laboratory assays. Laboratory assays are required to determine the widths and grade of mineralization as reported in preliminary geological logging. 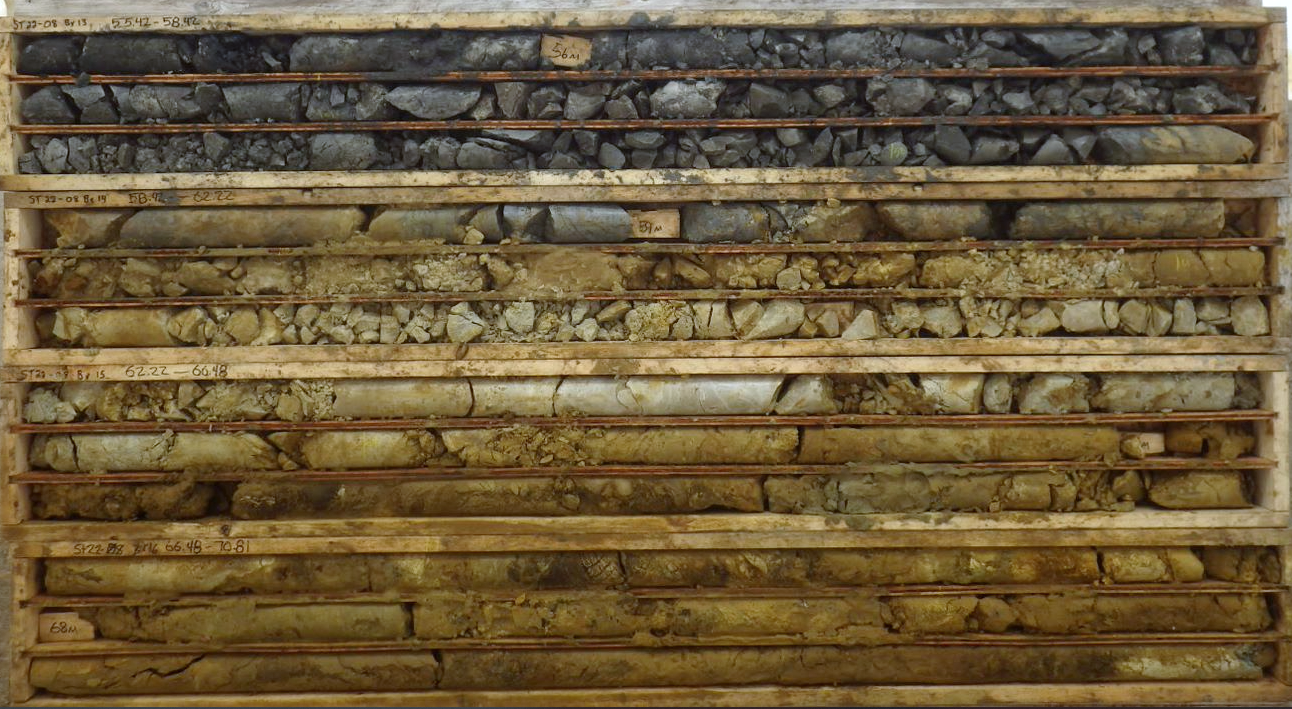 ST22-09 was drilled to a downhole depth of 155m and was designed to test a high-priority fixed-loop electromagnetic (EM) anomaly that was defined in the 2021 FLEM survey.

The targeted anomaly is interpreted to be steeply dipping and located immediately adjacent to a large copper gossan. The plate dimensions are modelled as 85m across by 419m deep.

Drill hole ST22-09 intersected three zones of weak vein style and fracture hosted copper mineralization. Whilst confirming the presence of copper mineralization, these intervals are not sufficient to determine the source of the EM anomaly and suggest that ST22-09 may have been drilled proximal to the primary target. Further, closer spaced EM (including downhole EM) will now be used to constrain the EM model for follow-up drilling.

Table 3 summarises the mineralization as observed in ST22-09. Intersections are expressed as downhole widths and are interpreted to be close to true widths. Visual estimates of sulfide type, quantity and habit should not be considered a substitute for laboratory assays. Laboratory assays are required to determine the widths and grade of mineralization as reported in preliminary geological logging. 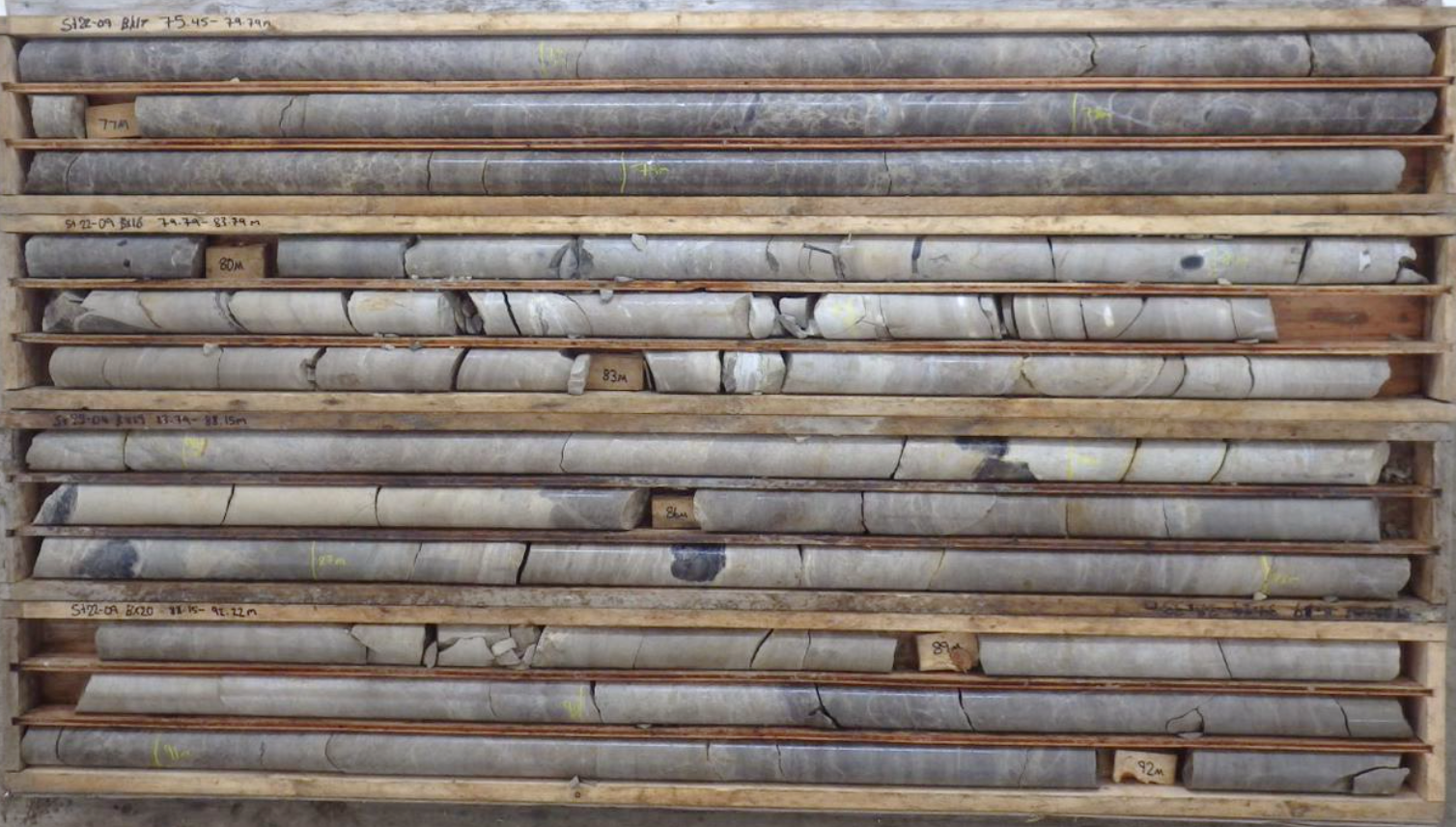 Table 4 shows details for drill holes completed at the Storm Project in the current program. A total 1,534.6m has been drilled to date.

The exploration phase of the current program has immediately delivered success with the discovery of a new potentially major copper mineral system within the Storm Project. The early indications from the mineralization intersected to date strongly suggest a large-scale stratiform sedimentary copper deposit model (see news release dated August 23, 2022).

Further diamond drilling and surface electromagnetics are planned to follow-up the 2750N Zone, ST22-09 anomaly and the new discovery. The drilling will also aim to define initial resources at the 4100N and 2200N Zones, where thick zones of high-grade copper mineralization have been intersected in historical drilling.

The EM will most likely consist of closely-spaced stations and moving loop configuration to better constrain the modelling. Downhole EM (DHEM) will also be used on all recent drill holes.

A detailed geophysical review will be completed with the aim of refining the current targets and planning follow-up surveys. Future surveys may include gravity, magnetics and further EM surveys.

Assays for all drill holes are pending and are expected in the coming weeks. 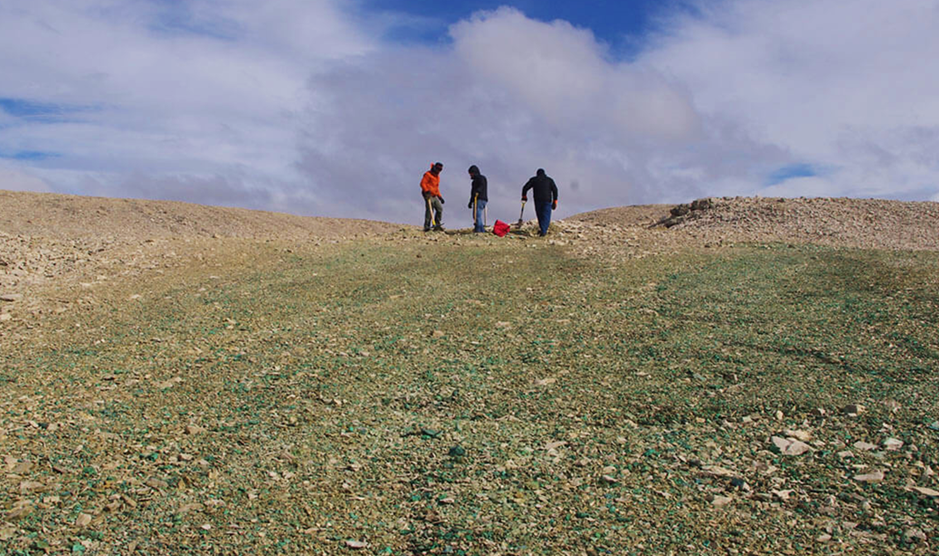 About the Storm Copper and Seal Zinc-Silver Projects, Nunavut

The Nunavut property consists of 117 contiguous mining claims and six prospecting permits covering an area of approximately 302,725 hectares on Somerset Island, Nunavut, Canada. The Storm Project comprises both the Storm Copper Project, a high-grade sediment hosted copper discovery (intersections including 110m* @ 2.45% Cu from surface and 56.3m* @ 3.07% Cu from 12.2m) as well as the Seal Zinc Deposit (intersections including 14.4m* @ 10.58% Zn, 28.7g/t Ag from 51.8m and 22.3m* @ 23% Zn, 5.1g/t Ag from 101.5m). Additionally, there are numerous underexplored targets within the 120-kilometre strike length of the mineralized trend, including the Tornado copper prospect where 10 grab samples yielded >1% Cu up to 32% Cu in gossans.

*Stated drillhole intersections are all core length, and true width is expected to be 60% to 95% of core length. 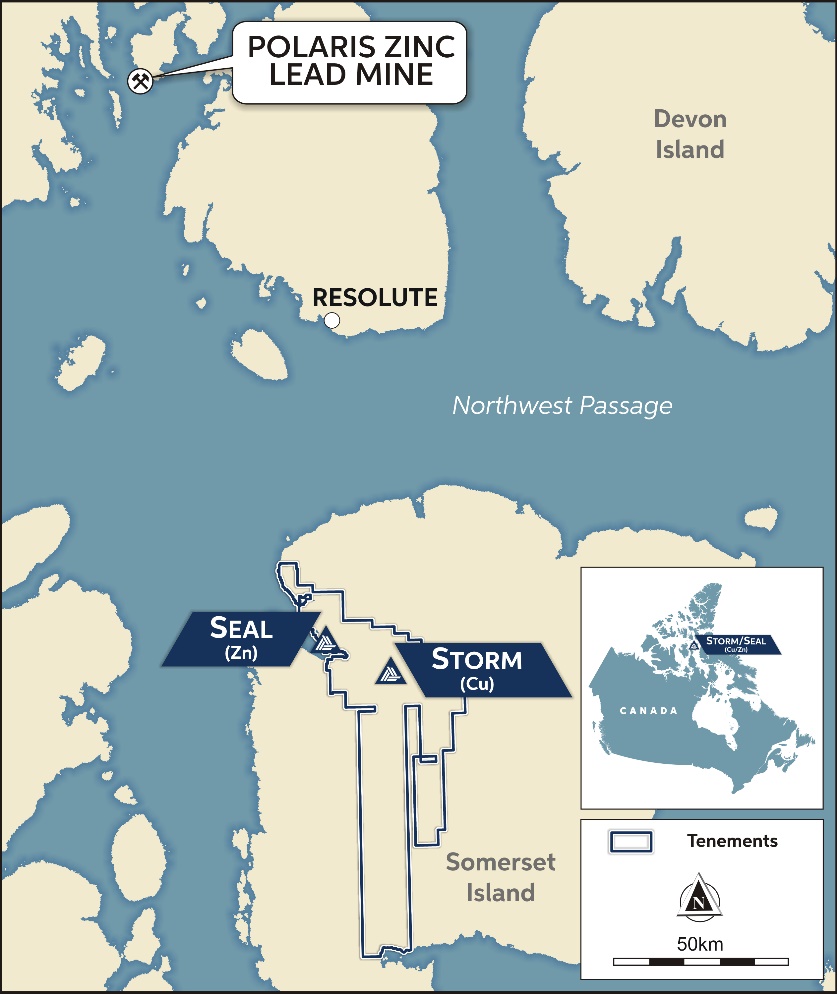 Michael Dufresne, M.Sc., P.Geol., P.Geo., is a qualified person as defined by National Instrument 43-101 and has reviewed and approved the scientific and technical information in this press release.

Aston Bay is a publicly traded mineral exploration company exploring for base metals and gold deposits in Virginia, USA, and Nunavut, Canada. The Company is led by CEO Thomas Ullrich with exploration in Virginia directed by the Company's advisor, Don Taylor, the 2018 Thayer Lindsley Award winner for his discovery of the Taylor Pb-Zn-Ag Deposit in Arizona. The Company is currently drilling the Mountain Base Metals Project in Virginia, exploring the Buckingham Gold Project, also in Virginia, and is in advanced stages of negotiation on other lands in the area.

The Company is also 100% owner of the Storm Project property, which hosts the Storm Copper Project and the Seal Zinc Deposit and has been optioned to American West Metals Limited.

AMERICAN WEST METALS LIMITED (ASX: AW1) is an Australian company focused on growth through the discovery and development of major base metal mineral deposits in Tier 1 jurisdictions of North America.

They are a progressive mining company focused on developing mines that have a low-footprint and support the global energy transformation.

Their portfolio of copper and zinc projects include significant existing mineral resource inventories and high-grade mineralization that can generate robust mining proposals. The company is commitment to the ethical extraction and processing of minerals and making a meaningful contribution to the communities where our projects are located.

The company is led by a highly experienced leadership team, with strategic initiatives that lay the foundation for a sustainable business which aims to deliver high-multiplier returns on shareholder investment and economic benefits to all stakeholders.