Use of this site indicates acceptance of the Privacy Policy and Terms of Use.
The information on this Website is not reliable and not intended to provide tax, legal, or investment advice. Nothing contained on the Website shall be considered a recommendation, solicitation, or offer to buy or sell a security to any person in any jurisdiction.
CEO.CA members discuss high-risk penny stocks which can lose their entire value. Only risk what you can afford to lose.
© 2016 - Pacific Website Company Inc.
@accesswire/aston-bay-discovers-new-quartz-veins-and-completes ↻
0 online
Today This week
Search Subscribe
Members of @accesswire/aston-bay-discovers-new-quartz-veins-and-completes 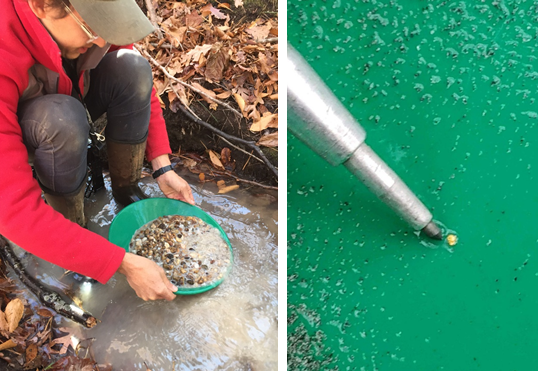 This initial soil sampling program at the Buckingham Gold Property comprised 1,203 soil samples at a sample spacing of 25m to 50m along lines separated by 100m to 500m. Approximately 31 linear kilometres of sample lines were sampled covering a total area of approximately 8.5km2. Analytical results are expected in early 2020 followed by further field work to extend the sampled area and to follow up on anomalies resulting from this initial phase of sampling.

Visible particulate (placer) gold grains were also recovered from adjacent streams in hand-panned alluvial gravels. These are the first rock, stream and soil samples collected in this new area.

As part of ongoing work, a mapping and structural analysis will be conducted across the property in early December by Mr. John C. Spurney, a highly experienced field-oriented exploration geologist. This work will be integrated with results of soil sampling and planned induced polarization geophysics for the purposes of drill hole targeting for a proposed early 2020 drill program.

"The soil sampling program was designed to detect gold-bearing quartz systems similar to that found in our initial discovery at the main Buckingham vein, but are currently hidden under the extensive soil cover in the area," stated Thomas Ullrich, CEO of Aston Bay. "There is less than 1% outcropping bedrock in this area, so to discover such an extensive zone of previously unrecognized quartz veining that is spatially associated with placer gold allows us to vault ahead to the next step in geologic evaluation in this area without waiting for further analyses. As well, the results from soil samples over both this newly discovered area and the previous discovery will be valuable in identifying other zones of similar mineralization currently hidden under the soil cover. We look forward to Mr. Spurney's evaluation to advance this project toward further drilling early in the new year."

The gold-bearing system is hosted within a package of interpreted Cambrian-age sediments, including greywackes with minor quartz-arenites (phyllite, schist and quartzites), within the Appalachian orogenic belt. This region is the site of the historically prolific Pyrite Belt which hosted a reported 250 gold mines that were in production prior to the California gold rush of 1849 but has seen little recent mineral exploration. Small scale and significant gold production have occurred historically throughout North and South Carolina as well as Virginia. A notable example of a rejuvenated historic producer in the region is OceanaGold's Haile Mine located in South Carolina where commercial production began in 2017 and is scheduled to produce up to 150,000 ounces of gold per year.

Aston Bay is a publicly traded mineral exploration company exploring for gold and base metal deposits in Virginia, USA, and Nunavut, Canada. The Company is led by CEO Thomas Ullrich with exploration in Virginia directed by the Company's advisor, Don Taylor, the 2018 Thayer Lindsley Award winner for his discovery of the Taylor Pb-Zn-Ag Deposit in Arizona

The Company has also acquired the exclusive rights to an integrated dataset over certain prospective private lands at the Blue Ridge Project and has signed agreements with timber and land companies which grants the company the option to lease the mineral rights to 11,065 acres of land located in central Virginia. These lands are located within a gold-copper-lead-zinc mineralized belt prospective for Carolina slate belt gold deposits, as well as sedimentary VMS, exhalative (SEDEX) and Broken Hill (BHT) type base metal deposits. Don Taylor, who led the predecessor company to Blue Ridge and assembled the dataset, has joined the Company's Advisory Board and will be directing the Company's exploration activities for the Blue Ridge Project. The Company is actively exploring the Buckingham Gold Project in Virginia and is in advanced stages of negotiation on other lands in the area.

The Company is also 100% owner of the Aston Bay Property located on western Somerset Island, Nunavut, which neighbours Teck's profitable, past-producing Polaris (Pb-Zn) Mine just 200km to the north. The Aston Bay Property hosts the Storm Copper Project and the Seal Zinc Deposit with drill-confirmed presence of sediment-hosted copper and zinc mineralization.