Use of this site indicates acceptance of the Privacy Policy and Terms of Use.
The information on this Website is not reliable and not intended to provide tax, legal, or investment advice. Nothing contained on the Website shall be considered a recommendation, solicitation, or offer to buy or sell a security to any person in any jurisdiction.
CEO.CA members discuss high-risk penny stocks which can lose their entire value. Only risk what you can afford to lose.
© 2016 - Pacific Website Company Inc.
@accesswire/aston-bay-holdings-presents-proposed-drill-holes-and ↻
0 online
Today This week
Search Subscribe
Members of @accesswire/aston-bay-holdings-presents-proposed-drill-holes-and

The locations of the eight proposed drill holes comprising the Phase 2 - 2020 Drill Program are presented in Figure 1 along with recently updated gold-in-soil geochemical data. Four of the proposed holes (A, B, C and D) are designed to test both the extension of the gold-bearing quartz vein 100 m to the southeast and highly anomalous soil samples. Two holes (B2 and C2) may be drilled to test the down-dip extension of the quartz vein. Proposed drill hole E will be drilled to test an extension to the main gold-in-soil geochemical anomaly at the zone for possible extensions to previously drilled zones of gold-bearing sericite-quartz-sulfide alteration zones that parallel the general north-south regional geological trend. Proposed drill hole F is designed to reduce drill hole spacing in the central portion of the structure and to confirm results from the previous operator (2016 drilling). 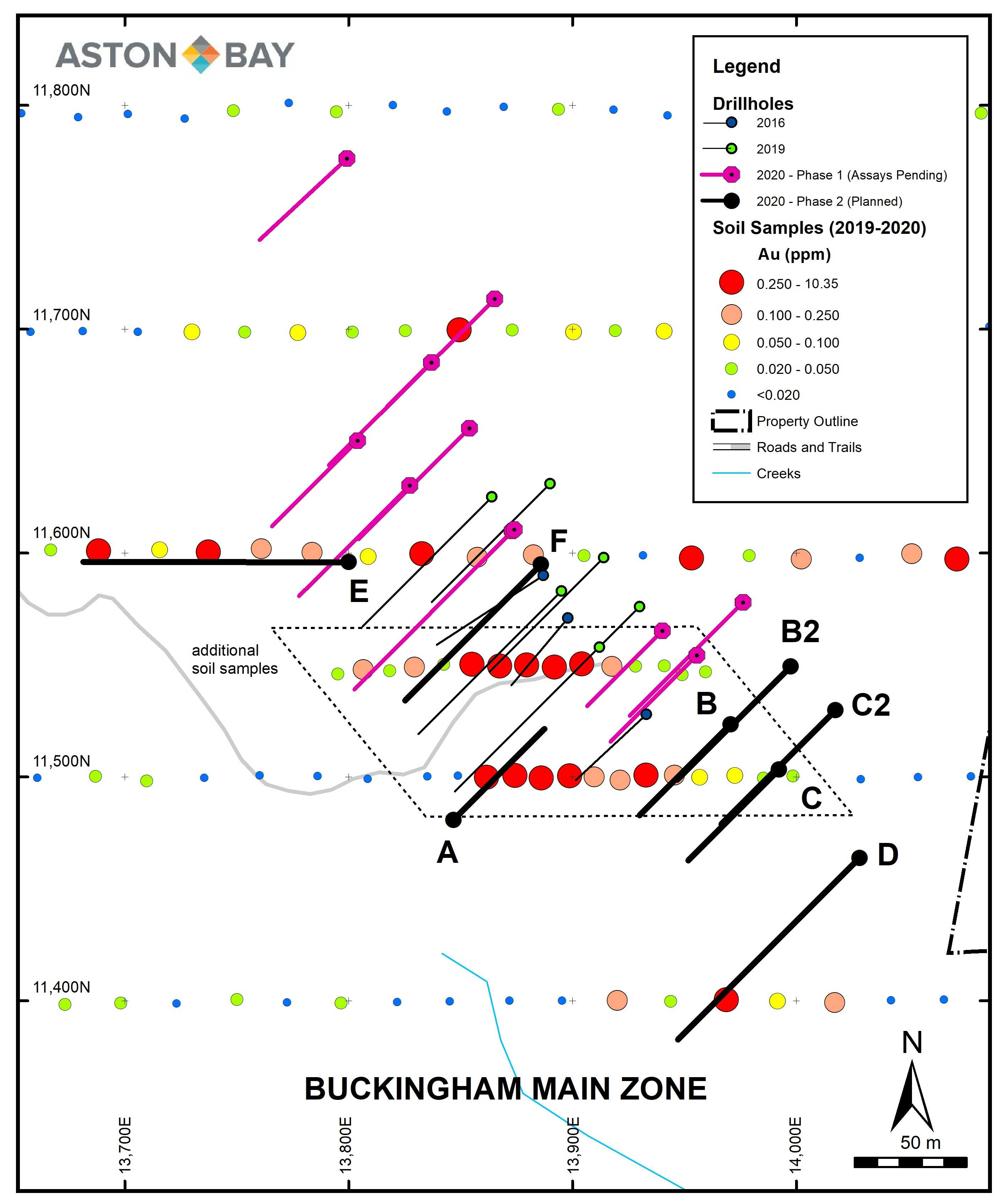 The Phase 2 - 2020 Drill Program is underway with one hole (drill hole A) completed to a depth of 113 m and proposed drill hole B now being advanced. The proposed drill plan is subject to change and not all holes may be drilled.

The updated soil geochemical data illustrated in Figure 1 now includes a total of 29 additional samples located in two orientation lines that were completed over the central portion of the Buckingham Main Zone to investigate the effect of sample depth on gold content, as well as other key elements. Multiple samples were collected at each site from depths ranging from 6" (~15cm) to 30" (~80cm) and the result of these ‘depth profile' samples showed no significant variance in the gold content within the top 30" of the saprolitic soils but did show that base metal concentrations tend to increase with depth, as expected. A sample depth of 6-12" (~15-30cm) was ultimately selected for the Buckingham soil sampling program completed earlier this year (see April 30, 2020 Aston Bay press release).

The east-west line orientation soil samples were collected across the central portion of the NW-SE trending Buckingham Main Zone, which comprises a series of visible gold-bearing quartz vein outcrops that extend over a strike length of some 150 m that have yielded grab sample assay values up to 701 grams per tonne (g/t) Au. Due to concerns regarding the potential loss (or downward dispersion) of fine gold within the saprolitic soil profile, the Company's soil sample analytical procedure was modified to include the crushing, homogenization and subsequent testing of the entire sample (coarse and fine fractions), which has the benefit of insuring that any coarse quartz vein material within a given sample will contribute to the overall geochemical signature of that sample. As a result, the newly added orientation sample data includes numerous highly anomalous (90th percentile) gold-in-soil values up to 10.35 g/t Au. These samples have helped to better define the extent of the Buckingham Main Zone and have been used to guide the completed Phase 1 and the recently initiated Phase 2 - 2020 Drill Programs.

A total of 1,218m were drilled in the ten diamond drill holes comprising the Phase 1 - 2020 Drill Program at the Buckingham Main Zone in March 2020 prior to the suspension of work due to Covid-19 concerns (see March 24, 2020 Aston Bay press release). All core samples from the initial (March 2020) Phase 1 drilling have been shipped to the laboratory for analysis by standard fire assay techniques, which will include metallic screen assaying of selected intervals with visible alteration and mineralization (including visible gold). Results are anticipated in the coming weeks. Logging of the core confirmed that the Phase 1 - 2020 drilling has intersected veining and alteration similar to that encountered in the 2019 drilling of the zone, which included core-length intercepts of up to 35.6 g/t Au over 2.03 m and 24.7 g/t Au over 3.57 m in gold-bearing quartz veins, as well as 2.2 g/t Au over 18.1 m and 1.9 g/t Au over 22.2 m in adjacent but separate sericite-quartz-pyrite alteration zones (see June 5, 2019 Aston Bay release).

The soil sampling program was completed by Aston Bay personnel and comprised the collection of approximately 0.5 kilograms of material from the top 30 centimetres of the soil profile. The samples were submitted for analysis at ALS Laboratories in Sparks, NV, where they were analysed by the AuME-TL44 technique, which is intended for regolith settings. The analytical technique includes gold plus 50 other elements using an Aqua Regia extraction from a 50 gram aliquot of dried, crushed and homogenized sample followed by an ICP-MS finish.

Aston Bay is a publicly traded mineral exploration company exploring for gold and base metal deposits in Virginia, USA, and Nunavut, Canada. The Company is led by CEO Thomas Ullrich with exploration in Virginia directed by the Company's advisor, Don Taylor, the 2018 Thayer Lindsley Award winner for his discovery of the Taylor Pb-Zn-Ag Deposit in Arizona.

The Company has acquired the exclusive rights to an integrated dataset over certain prospective private lands and has signed agreements with timber and land companies which grants the company the option to lease the mineral rights to 11,065 acres of land located in central Virginia. These lands are located within a gold-copper-lead-zinc mineralized belt prospective for Carolina slate belt gold deposits and Virginia gold-pyrite belt deposits, as well as sedimentary VMS, exhalative (SEDEX) and Broken Hill (BHT) type base metal deposits. Don Taylor, who led the predecessor company to Blue Ridge and assembled the dataset, has joined the Company's Advisory Board and will be directing the Company's exploration activities for the Blue Ridge Project. The Company is actively exploring the Buckingham Gold Project in Virginia and is in advanced stages of negotiation on other lands in the area.

The Company is also 100% owner of the Aston Bay Property located on western Somerset Island, Nunavut, which neighbours Teck's profitable, past-producing Polaris (Pb-Zn) Mine just 200km to the north. The Aston Bay Property hosts the Storm Copper Project and the Seal Zinc Deposit with drill-confirmed presence of sediment-hosted copper and zinc mineralization.