24 Nov 2021, 08:01
@accesswire Gatling Extends Multiple Zones Beyond the 2021 Mineral Resource Estimate Model at the Bear Deposit Including 9.4 g/t Au over 4.0 m at the Larder Gold Project, ON $GATGF $GTR

Use of this site indicates acceptance of the Privacy Policy and Terms of Use.
The information on this Website is not reliable and not intended to provide tax, legal, or investment advice. Nothing contained on the Website shall be considered a recommendation, solicitation, or offer to buy or sell a security to any person in any jurisdiction.
CEO.CA members discuss high-risk penny stocks which can lose their entire value. Only risk what you can afford to lose.
© 2021 - CEO.CA Technologies Ltd.
@accesswire/gatling-extends-multiple-zones-beyond-the-2021-mineral ↻
0 online
Today This week
Search Subscribe
Members of @accesswire/gatling-extends-multiple-zones-beyond-the-2021-mineral

by @accesswire on 24 Nov 2021, 08:01
Gatling Extends Multiple Zones Beyond the 2021 Mineral Resource Estimate Model at the Bear Deposit Including 9.4 g/t Au over 4.0 m at the Larder Gold Project, ON

VANCOUVER, BC / ACCESSWIRE / November 24, 2021 / GATLING EXPLORATION INC. (TSXV:GTR)(OTCQB:GATGF) (the "Company" or "Gatling) is pleased to announce multiple new gold intersections extending its previously reported 2021 Mineral Resource Estimate ("MRE") model including 9.4 g/t Au over 4.0 m in the Bear North zone and 14.7 g/t Au over 1.5 m in the newly tested Bear East Zone. Gatling has shifted focus from building the new MRE to expanding and extending these newly modelled zones along strike and at depth with ongoing drilling at the Larder Gold Project.

Jason Billan, President and CEO for Gatling, commented, "Upon wrapping up the 25,000 meter drill program announced at the beginning of 2021, and on the heels of a strong summer drilling campaign at Bear, we have expanded Bear drilling into Q4, yielding highly additive intersections relative to the recently announced resource estimate at Larder. Bear has now been extended in both directions to 1.3 km along strike driven by the Bear West zone, which is now approaching the Cheminis deposit, and the newly discovered Bear East zone, where we hit 14.7 g/t over 1.5 m just 81 m below surface. Bear East remains relatively untested with 1.5 km of open strike towards our property boundary. Beyond Bear, we intend to transition drilling to the Swansea Zone in early Q1/22, which holds roughly 4 km of strike along the break on the southwestern side of our land package and has seen just 19 km of historical drilling." 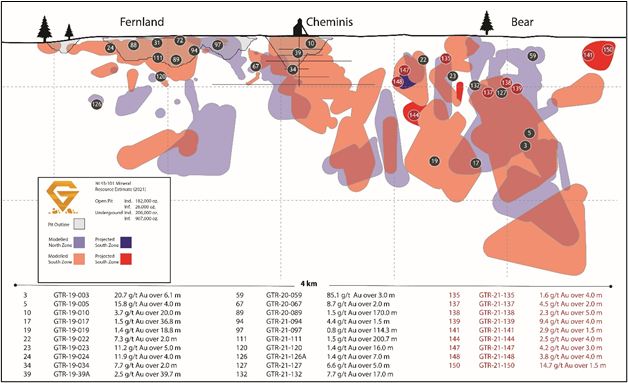 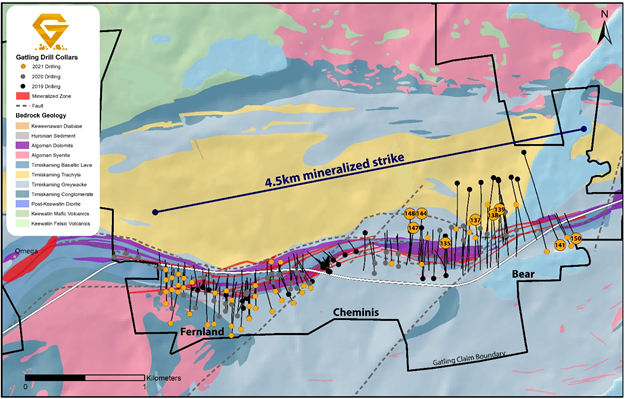 Figure 2. Geological plan map of the ongoing drill campaign at the Larder Gold Project with multiple mineralized lenses at each zone and recent drill hole traces. 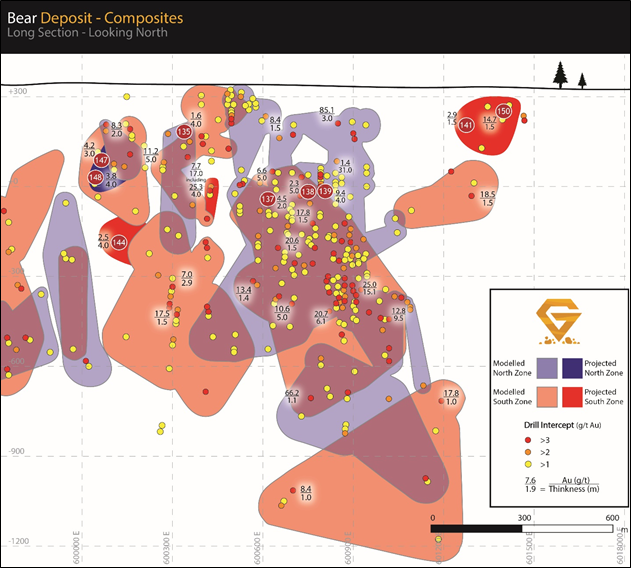 Figure 3. Bear Deposit long section showing the location of recent drill results, new mineralized zones extended from the 2021 MRE model and gold contours connecting the core of the Bear deposit up and down plunge. 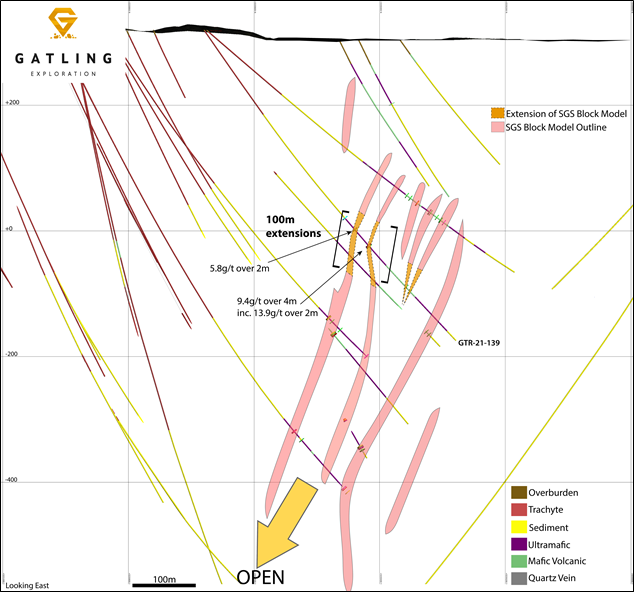 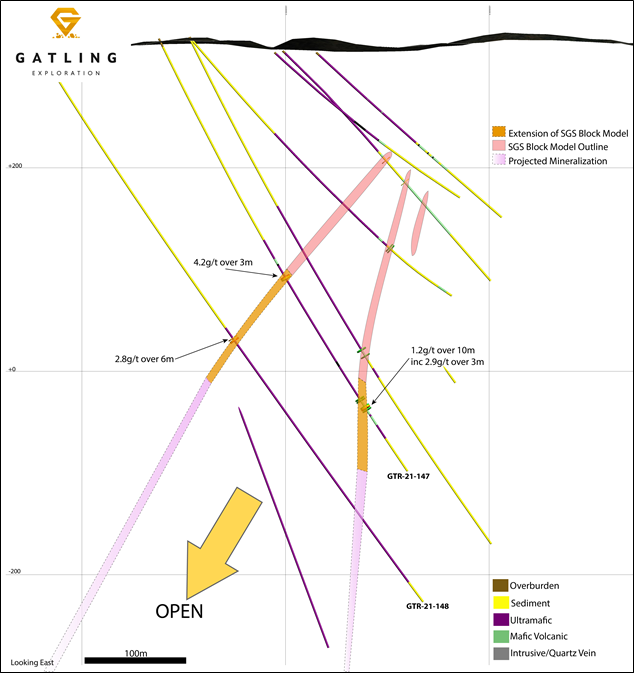 Figure 5. Cross Section of 600050E at the Bear deposit displaying new mineralized zones extending at depth outside of the 2021 MRE block model

The Company also advises that it has cancelled the private placement announced in its news release of October 18, 2021.

Drill core is logged and sampled at the Larder Gold project site. Core samples from the program are cut in half, using a diamond cutting saw with half sent for assay at SGS lab in Cochrane, Ontario. The other half is secured and retained on site. All samples are analyzed for gold using standard Fire Assay-AA techniques. Samples returning greater than 5.0 g/t gold are analyzed utilizing standard Fire Assay-Gravimetric methods. Certified reference standards and blanks are routinely inserted into the sample stream as part of Gatling's quality control/quality assurance program.

Gatling is a Canadian gold exploration company focused on advancing the Larder Gold Project, located in the prolific Abitibi greenstone belt in Northern Ontario. The Larder project hosts three high-grade gold deposits along the Cadillac-Larder Lake Break, 35 km east of Kirkland Lake. The Larder property has a global Mineral Resource Estimate (2021) of 388,000 oz Au Indicated and 933,000 oz Au Inferred gold ounces from both open pit and underground resources. The project is 100% owned by Gatling and is comprised of patented and unpatented claims, leases and mining licenses of occupation within the McVittie and McGarry Townships. The 3,370 ha project area is positioned 7 km west of the Kerr Addison Mine, which produced 11 million ounces of gold. All parts of the Larder property are accessible by truck or all-terrain vehicles on non-serviced roads and trails.

The technical content of this news release has been reviewed and approved by Nathan Tribble, P. Geo., VP Exploration of Gatling Exploration, and a Qualified Person pursuant to National Instrument 43-101.

ON BEHALF OF THE BOARD OF DIRECTORS,