Use of this site indicates acceptance of the Privacy Policy and Terms of Use.
The information on this Website is not reliable and not intended to provide tax, legal, or investment advice. Nothing contained on the Website shall be considered a recommendation, solicitation, or offer to buy or sell a security to any person in any jurisdiction.
CEO.CA members discuss high-risk penny stocks which can lose their entire value. Only risk what you can afford to lose.
© 2022 - CEO.CA Technologies Ltd.
@accesswire/lithoquest-conducts-field-program-at-miminiska ↻
1 online
Today This week
Search Subscribe
Members of @accesswire/lithoquest-conducts-field-program-at-miminiska

by @accesswire on 6 Apr 2022, 09:02
Lithoquest Conducts Field Program at Miminiska

VANCOUVER, BC / ACCESSWIRE / April 6, 2022 / Lithoquest Resources Inc. (TSX-V:LDI) ("Lithoquest" or the "Company") today announced that it has completed ground geophysical surveys, identified high-priority targets, and conducted drilling on the Miminiska Prospect located within the traditional territory of the Eabametoong First Nation ("EFN") in northwestern Ontario.

"Results continue to support our thesis that the Miminiska Prospect represents an exceptional opportunity," stated Bruce Counts, President and CEO of Lithoquest. "The high-priority targets identified have the potential to extend and expand the high-grade gold mineralization at Miminiska."

The Miminiska Prospect is located within the 5,500 ha Miminiska Project and is characterized by an extensively faulted and folded banded iron formation ("BIF"). Drilling conducted between 1944 and 2005 shows that high-grade gold mineralization occurs within the BIF and is associated with conductive sulphide minerals such as arsenopyrite and pyrrhotite. Historical drill results* at the Miminiska prospect include 5.75 g/t Au over 20.8m starting at 51.9m and 13.95 g/t Au over 5.3m starting at 235.8m.

The Company commenced field operations on the Miminiska Prospect in late February. More than 135 line-km of ground magnetic and electromagnetic surveys were completed before drilling was initiated. Drilling tested two of the new high-priority targets. Approximately 650m of core was obtained in total and sulphide mineralization was observed in both drill holes. Samples of the mineralized core will be submitted for assay with results to be reported in due course. Lithoquest suspended drilling after completing two holes to facilitate consultation with the EFN on the Company's three principal projects: Miminiska, Keezhik and Attwood. Drilling is anticipated to resume in the summer of 2022.

The recently completed ground geophysical surveys have identified several targets within the Miminiska Prospect that have not yet been tested with drilling and that are similar in response to the known zones of high-grade gold mineralization.

A 45 line-km horizontal loop electromagnetic survey was completed over the Miminiska BIF. Multi-frequency data were collected along 50m lines with the transmitter and receiver separated by 100m. 91 line-km of ground magnetic data were also collected. The detailed magnetic data provides greater resolution on the location of the BIF and the structural setting of the prospect area.

Figure 1 shows the recently collected ground magnetic data over the Miminiska prospect as well as the two completed drill holes and areas targeted for drilling.

Lithoquest acknowledges that its three key projects, Miminiska, Keezhik and Attwood, are located on the traditional territory of the EFN. Discussions between the Company and EFN leadership have commenced with the goal of completing a formal Exploration Agreement.

"Lithoquest has begun engaging with the EFN on the Company's three principal projects and respects their community protocols," commented Bruce Counts. "We are looking forward to formalizing our relationship by working toward an Exploration Agreement that will bring clarity and transparency for all parties". 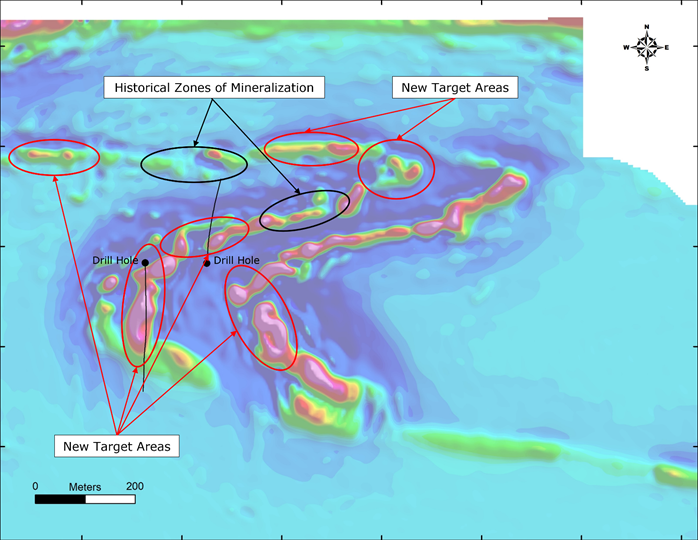 * Historical results have not been independently verified by Lithoquest; and, there is no guarantee that the Company can reproduce the results in whole or in part. Potential investors should not rely on these historical results when making an investment decision

Lithoquest is a Canadian mineral exploration company focused on the discovery and development of economic precious and base metal deposits on three district-scale projects in the Fort Hope greenstone belt in northwest Ontario: Miminiska, Keezhik and Attwood.