Use of this site indicates acceptance of the Privacy Policy and Terms of Use.
The information on this Website is not reliable and not intended to provide tax, legal, or investment advice. Nothing contained on the Website shall be considered a recommendation, solicitation, or offer to buy or sell a security to any person in any jurisdiction.
CEO.CA members discuss high-risk penny stocks which can lose their entire value. Only risk what you can afford to lose.
© 2016 - Pacific Website Company Inc.
@accesswire/nighthawk-expands-high-grade-zone-35-at-colomac ↻
0 online
Today This week
Search Subscribe
Members of @accesswire/nighthawk-expands-high-grade-zone-35-at-colomac

TORONTO, ON / ACCESSWIRE / September 29, 2020 / Nighthawk Gold Corp. ("Nighthawk" or the "Company") (TSX:NHK)(OTCQX:MIMZF) is pleased to report assay results for four (4) drillholes (1,896 metres) completed on Zone 3.5 of the Colomac Main Sill, part of the Colomac Gold Project ("Colomac") centrally located within its Indin Lake Gold Property, Northwest Territories, Canada (Figure 1; Table 1). These are the first holes to be reported since the Company resumed drilling in mid-July after a 3-month suspension of activities due to Coronavirus precautions.

Zone 3.5 lies within the southern portion of the Colomac Main Sill and is one of several areas known to host distinct higher-grade mineralization. Drilling to-date has confirmed and expanded on historical drill results that alluded to the possible existence of a higher-grade domain. Recent drilling has continued to advance this opportunity by infilling areas of high-grade shallow mineralization, expanding them along strike, and tracking those areas to new depths. The Company has also been active drilling within the "Exploration Target" , a high-profile region of the Colomac Main sill that with 50,000 metres to 75,000 metres of new drilling up to 1.50 million ounces ("Moz") of gold could potentially be added to the current resource at grades between 1.8 gpt Au and 2.0 gpt Au (see press release dated July 28, 2020). It is anticipated that by the end of the current 2020 drill campaign upwards of 20,000 metres of the required total will have been completed.

Dr. Michael Byron, President and CEO commented, "Drilling at Zone 3.5 continues to demonstrate the zone's strong continuity of mineralization and overall cohesiveness of its higher-grade portions. Two of the four holes reported today from Zone 3.5 were drilled to address gaps in drill coverage, test the zone's down plunge northern extension, and to explore new areas to depth and south of previous drilling. Both holes returned significant intercepts within new regions and have successfully extended mineralization to new depths, a strong indication of its untapped exploration potential to depth and along strike."

"We are also pleased to report that drilling has been effective in providing some of the required intersections needed to help convert the "Exploration Target" opportunity in this area into future resources."

Drill Summary
Drilling at Zone 3.5 has confirmed, and expanded on, historical drill results that alluded to the possible existence of a higher-grade domain, resulting in progressively better zone definition and early recognition and constraining of its higher-grade core. Recent drilling has continued to advance the opportunity by testing newly designated high-profile areas within the "Exploration Target" (as described above), infilling areas of high-grade shallow mineralization, tracking those areas to new depths, and expanding them along strike.

C20-04 significantly extended mineralization 130 metres below hole C12-15, the Company's previous deepest hole in the area (Figure 1, see press release dated October 10, 2012). C12-15 was drilled as a sub vertical hole (-80 degrees) to explore for variations in mineralized quartz vein/stringer density with depth and to test grade continuity. Hole C12-15 intersected 203.40 metres of 2.49 gpt Au, including higher-grade subintervals of 69.35 metres of 4.12 gpt Au, 25.75 metres of 7.78 gpt Au and 33.85 metres of 3.03 gpt Au. In penetrating from the hanging wall of the sill through to its footwall, C12-15 effectively confirmed the zone's consistency and higher-grade character from surface to a vertical depth of 400 metres.

Hole C20-07 was collared 100 metres north of C20-04 to test the northern down plunge extension of Zone 3.5 below previous holes C19-26 and C18-12B (Figure 1, see press releases dated January 7, 2020, and September 11, 2018). The hole tracked close to the sill's lower quartz diorite and quartz gabbro contact and recorded a 60-metre gap in mineralization midway along its 220-metre downhole intercept that appears to be a function of the hole's close proximity to the less mineralized underlying quartz gabbro. However, it did intersect a well mineralized upper section that returned 33.00 metres of 1.90 gpt Au, including 4.50 metres of 3.88 gpt Au; and a lower broader intersection of 52.75 metres of 1.55 gpt Au, including 12.00 metres of 2.81 gpt Au, and including 3.75 metres of 5.17 gpt Au, extending mineralization up to 90 metres below the previous intercepts where its down plunge extension has been traced to almost 400 metres vertical and where it remains open (Figure 3).

Holes C20-04 and C20-07 were successful in intersecting high-profile regions within the "Exploration Target", extending well mineralized areas to new depths and advancing resource expansion opportunities further south and down plunge to the north where the zone remains open.

Holes C20-05 and C20-05B were collared 175 metres south-southwest of C12-15 (Figure 1) and 50 metres south of previously reported holes C19-38 and C19-38B (see press release dated December 3, 2019). Holes C19-38 and C19-38B were drilled to explore the projected up-plunge extension of Zone 3.5 south of previous drilling in an unexplored area of the sill. Both holes intersected shallow high-grade mineralization hosted by quartz veins within the basal quartz gabbro phase of the intrusion outside and west of the quartz diorite portion of the sill. This represented the first documented occurrence of a new type of Colomac mineralization, highlighted by the hole C19-38 intersection of 11.20 metres of 4.41 gpt Au, including 6.60 metres of 7.09 gpt Au, and including 3.75 metres of 12.19 gpt Au.

The C20-05 series holes were drilled to test for additional mineralized quartz veins within the quartz gabbro further south. While the upper hole, C20-05, returned a narrow intercept at 100 metres vertical depth, the steeper hole, C20-05B, posted similar intercepts to the C19-38 series holes, returning 7.25 metres of 9.04 gpt Au, including 4.25 metres of 13.09 gpt Au at 165 metres vertical depth and extended this target opportunity an additional 50 metres south where it remains open.

There have been other instances of mineralized quartz veins intersected outside of the quartz diorite. Hole C12-04, located 185 metres northeast of the C20-05 series holes (Figure 1) intersected shallow mineralized quartz veins that returned 31.20 gpt Au over 2.40 metres within hanging wall mafic volcanic rocks 100 metres east of the sill (see press release dated June 20, 2012). These two occurrences may the result of remobilization of gold from the intrusion into favorable structural settings within adjacent units. If so, they could represent an important new deposit type at Colomac. However, additional work is needed to better understand the scale of opportunity. 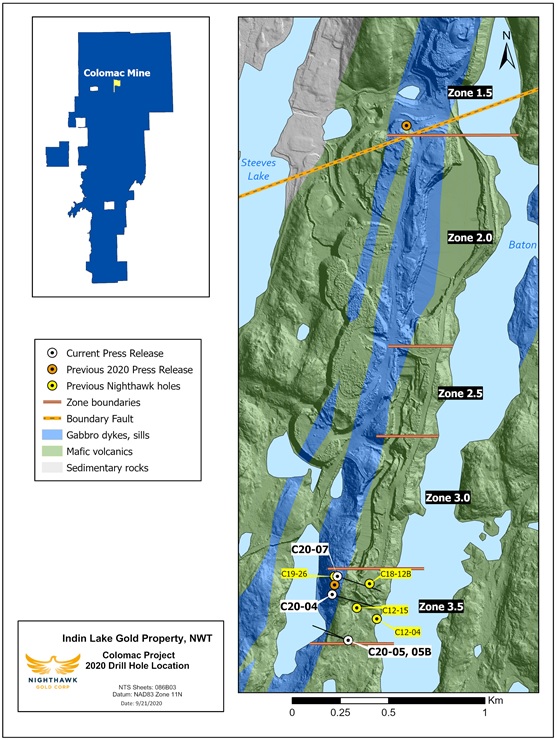 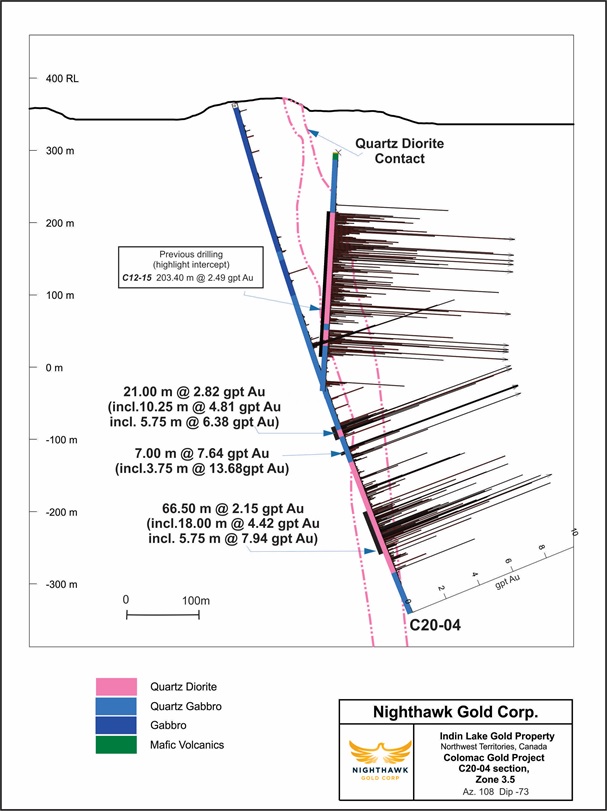 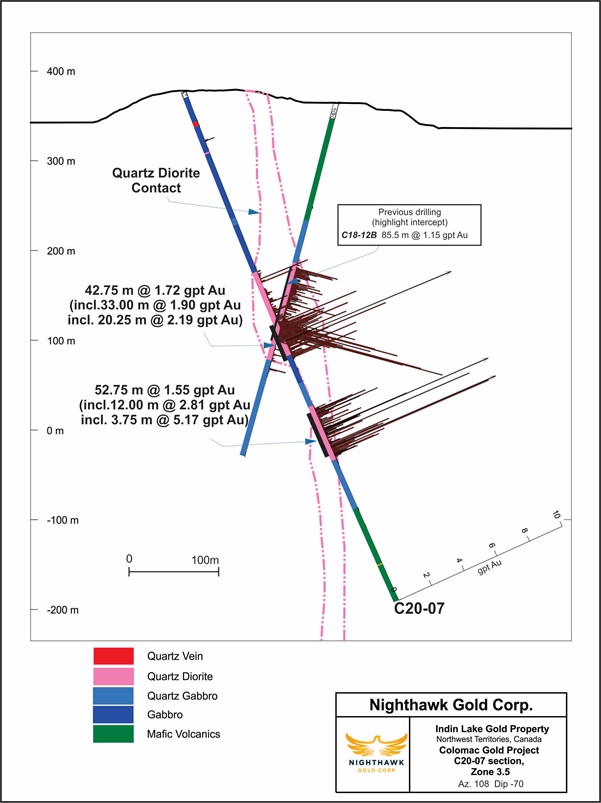 Technical Information
Nighthawk has implemented a quality-control program to comply with best practices in the sampling and analysis of drill core. Drill core samples were transported in security-sealed bags for analyses at ALS Global Assay Laboratory in Vancouver, BC ("ALS Global"). ALS Global is an ISO/IEC 17025 accredited laboratory. Pulp and metallics assaying for gold was conducted on the entire pulverized sample.

The Company has an experienced and dedicated team with a track record of successfully advancing projects and is well funded and supported to complete its goals and objectives.

Qualified Person
Technical information related to the 2020 Mineral Resource Estimate on the 100% owned Indin Lake Gold Property (the "2020 MRE") was reviewed and approved by Marina Iund, M.Sc., P.Geo., Project Geologist and Carl Pelletier, P.Geo., Co-President Founder of InnovExplo who are independent Qualified Persons as defined by NI 43-101, with the ability and authority to verify the authenticity and validity of this data. Please refer to the NI 43-101 technical report "NI 43-101 Technical Report and Mineral Resource Estimate for the Indin lake Gold Property, Northwest Territories, Canada", dated September 11, 2020, as filed under the company's profile on www.sedar.com.

Dr. Michael J. Byron, Ph.D., P.Geo., President & Chief Executive Officer of Nighthawk, who is the "Qualified Person" as defined by NI 43-101 for this project, has reviewed and approved of the technical disclosure contained in this news release.

Forward-Looking Information
This news release contains "forward-looking information" within the meaning of applicable Canadian securities legislation. Forward-looking information includes, but is not limited to, information with respect to the Company's continued exploration programs (including size and budget) and the ability to advance targets and the timing and results thereof; the ability to add upwards of 1.5 Moz of additional resources grading anywhere from 1.8 to 2.0 gpt Au with an estimated 50,000 to 75,000 metres of drilling and the timing surrounding such an endeavour; the 2020 MRE; and access to available capital to complete all work necessary to achieve the Company's stated goals and objectives. Generally, forward-looking information can be identified by the use of forward-looking terminology such as "plans", "expects", or "does not expect", "is expected", "budget", "scheduled", "estimates", "forecasts", "intends", "anticipates", or "does not anticipate", or "believes" or variations of such words and phrases or state that certain actions, events or results "may", "could", "would", "might", or "will be taken", "occur", or "be achieved".

Forward-looking information is based on the opinions and estimates of management at the date the information is made, and is based on a number of assumptions and is subject to known and unknown risks, uncertainties and other factors that may cause the actual results, level of activity, performance or achievements of Nighthawk to be materially different from those expressed or implied by such forward-looking information, including risks associated with the exploration, development and mining such as economic factors as they effect exploration, future commodity prices, changes in foreign exchange and interest rates, actual results of current exploration activities, government regulation, political or economic developments, environmental risks, permitting timelines, capital expenditures, operating or technical difficulties in connection with development activities, employee relations, the speculative nature of gold exploration and development, including the risks of diminishing quantities of grades of reserves, contests over title to properties, and changes in project parameters as plans continue to be refined as well as those risk factors discussed in Nighthawk's annual information form for the year ended December 31, 2018, available on www.sedar.com. Although Nighthawk has attempted to identify important factors that could cause actual results to differ materially from those contained in forward-looking information, there may be other factors that cause results not to be as anticipated, estimated or intended. There can be no assurance that such information will prove to be accurate, as actual results and future events could differ materially from those anticipated in such information. Accordingly, readers should not place undue reliance on forward-looking information. Nighthawk does not undertake to update any forward-looking information, except in accordance with applicable securities laws.