Use of this site indicates acceptance of the Privacy Policy and Terms of Use.
The information on this Website is not reliable and not intended to provide tax, legal, or investment advice. Nothing contained on the Website shall be considered a recommendation, solicitation, or offer to buy or sell a security to any person in any jurisdiction.
CEO.CA members discuss high-risk penny stocks which can lose their entire value. Only risk what you can afford to lose.
© 2022 - CEO.CA Technologies Ltd.
@accesswire/snowline-gold-intersects-3380-m-of-13-grams-per-tonne ↻
0 online
Today This week
Search Subscribe
Members of @accesswire/snowline-gold-intersects-3380-m-of-13-grams-per-tonne 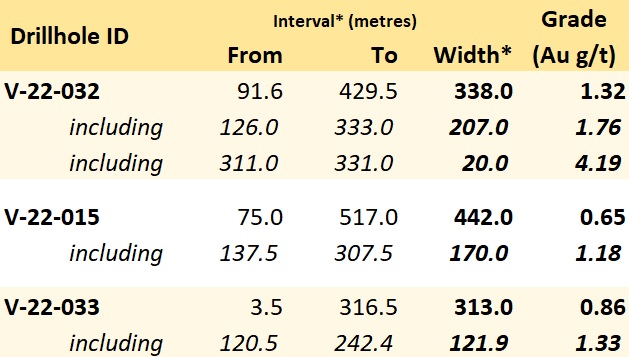 Table 1 - Preliminary highlight summary of Snowline's latest assay results. *Interval widths reported; true widths of the system are not yet known. The geometry of the mineralized zone is not determined by any individual vein nor structure and depends instead on the broader geometries of various vein arrays.

"The latest results from Valley continue to demonstrate substantial scale and strong grades for a reduced intrusion-related gold system," said Scott Berdahl, CEO & Director of Snowline. "Holes V-22-015 and 032 add considerably to the known tonnage of well-mineralized rock in Valley's central zone. The shape, the size, and the distribution of grades that we're seeing at Valley-with many of the highest grades encountered to date starting at surface-bode very well for the potential economics of the discovery. We eagerly await remaining 2022 assay results and their contributions to our understanding of this large mineralized system, with more than 5,000 m still to come at Valley and all five holes (>2,000 m) still pending from our nearby Gracie target." 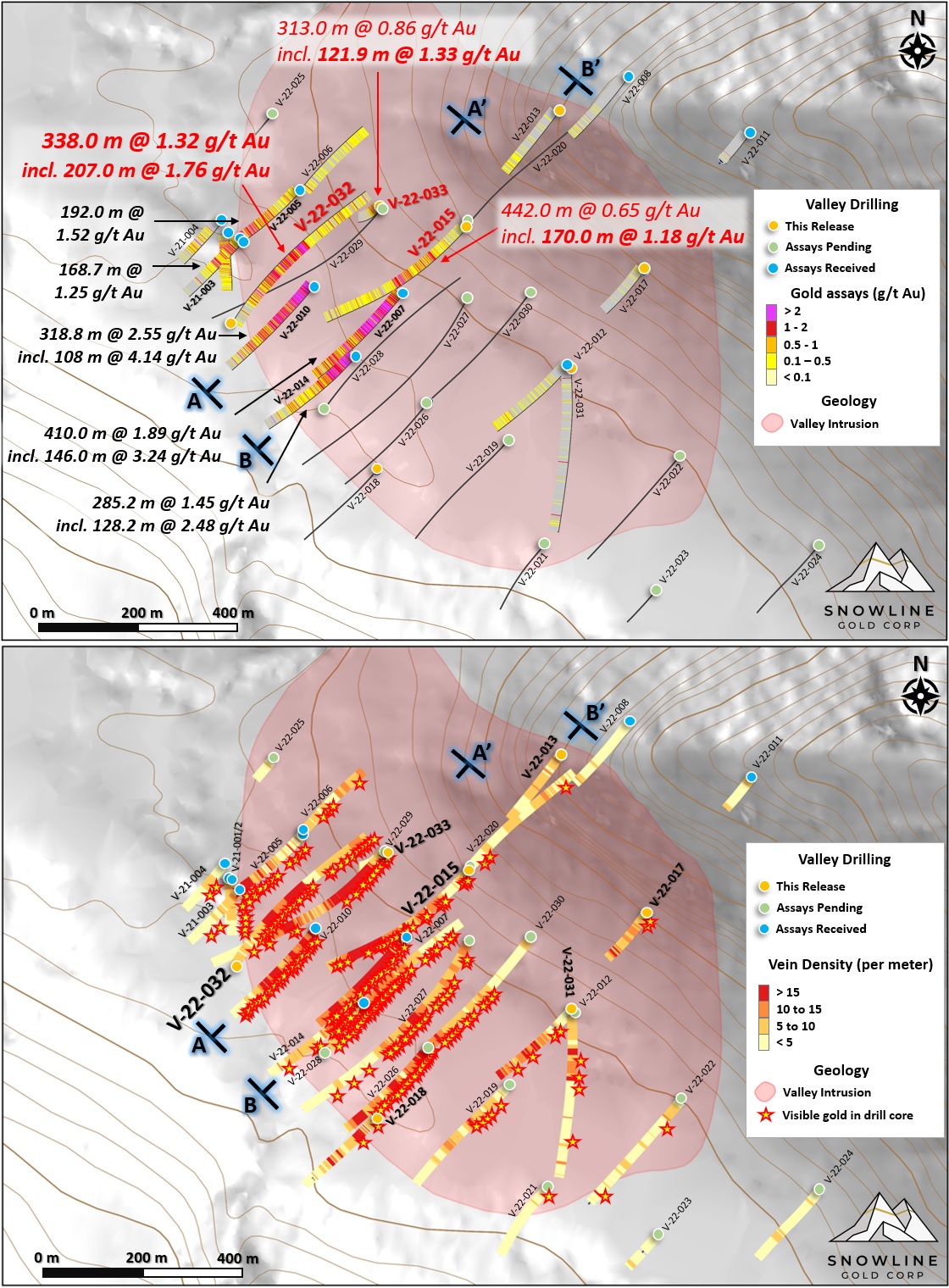 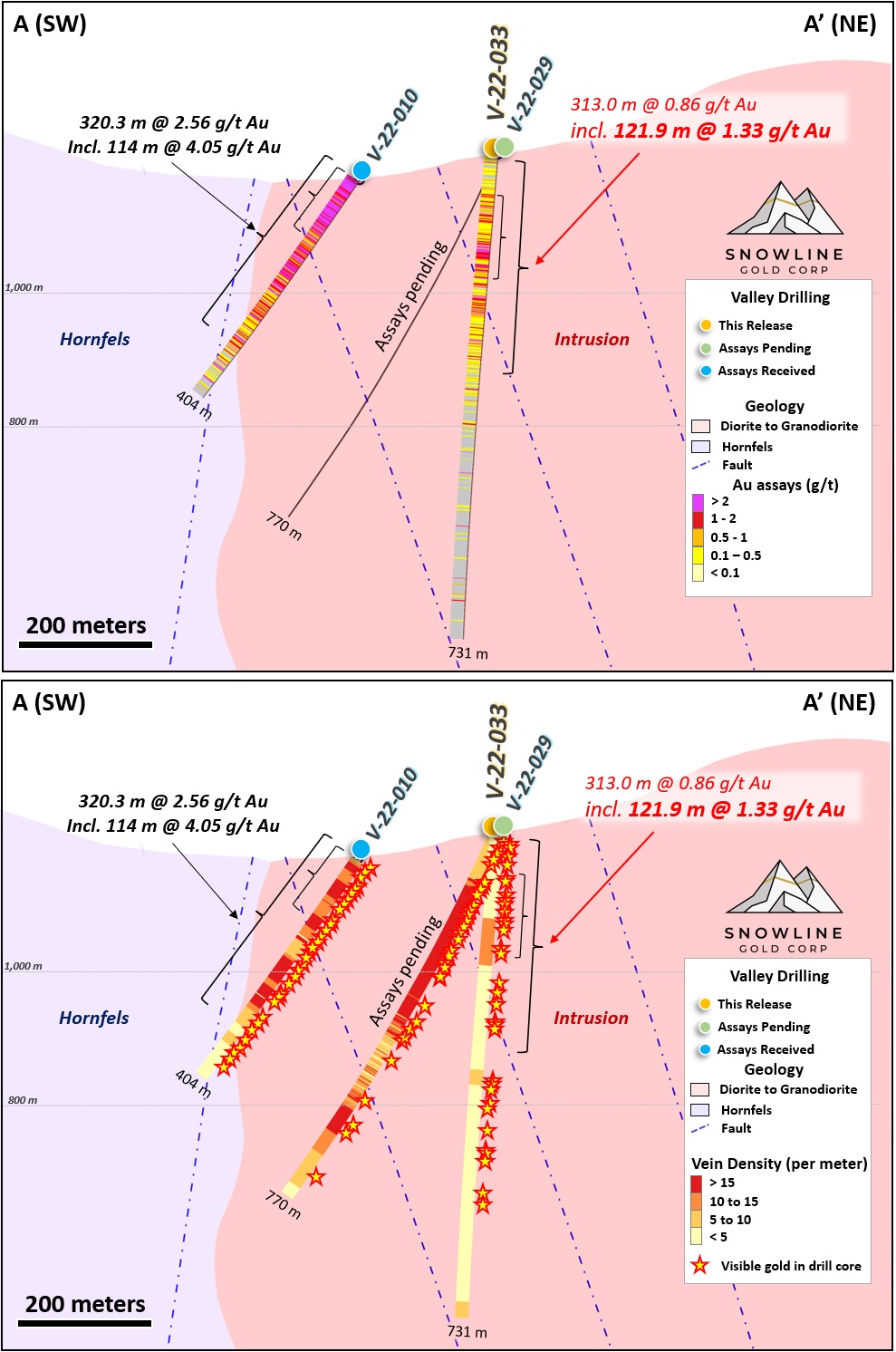 Figure 2 - Cross section A, showing results received (top) and vein densities alongside instances of visible gold observed during logging (bottom). V-22-033 expands the known width of the mineralized zone locally to >300m. While broad zones of continuous mineralization were not encountered at depth in this location, local intervals were. The deepest >1 g/t Au assay ran 1.2 g/t Au over 1.5 m from 672.5 m downhole. Views look northwest. 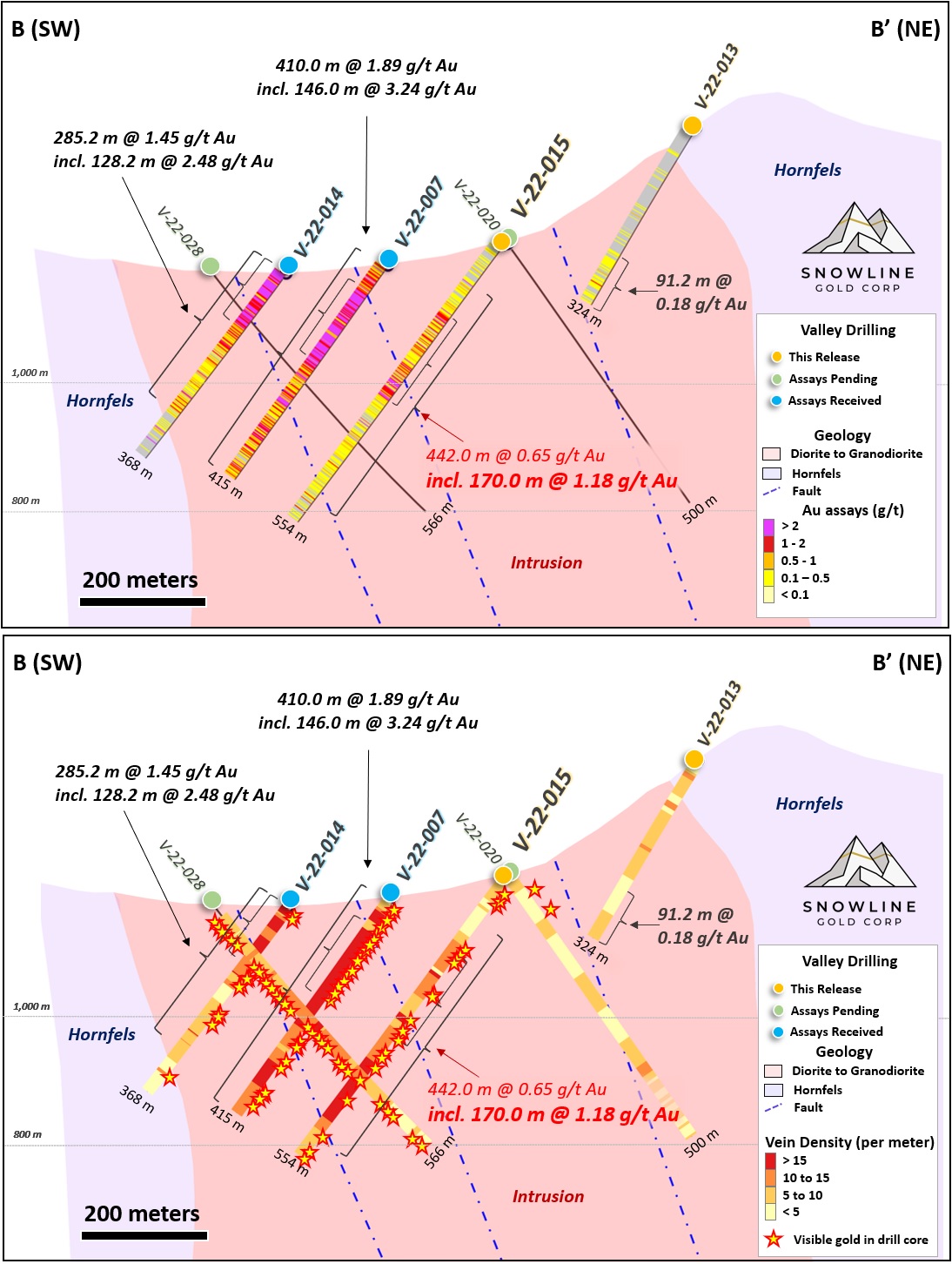 Figure 3 - Cross section B, showing results received to date (top) and vein densities alongside instances of visible gold observed during logging (bottom). V-22-015 was drilled to test the relatively high-grade mineralization encountered in V-22-014 and V-22-007 across a wider width and at depth. Views look northwest. 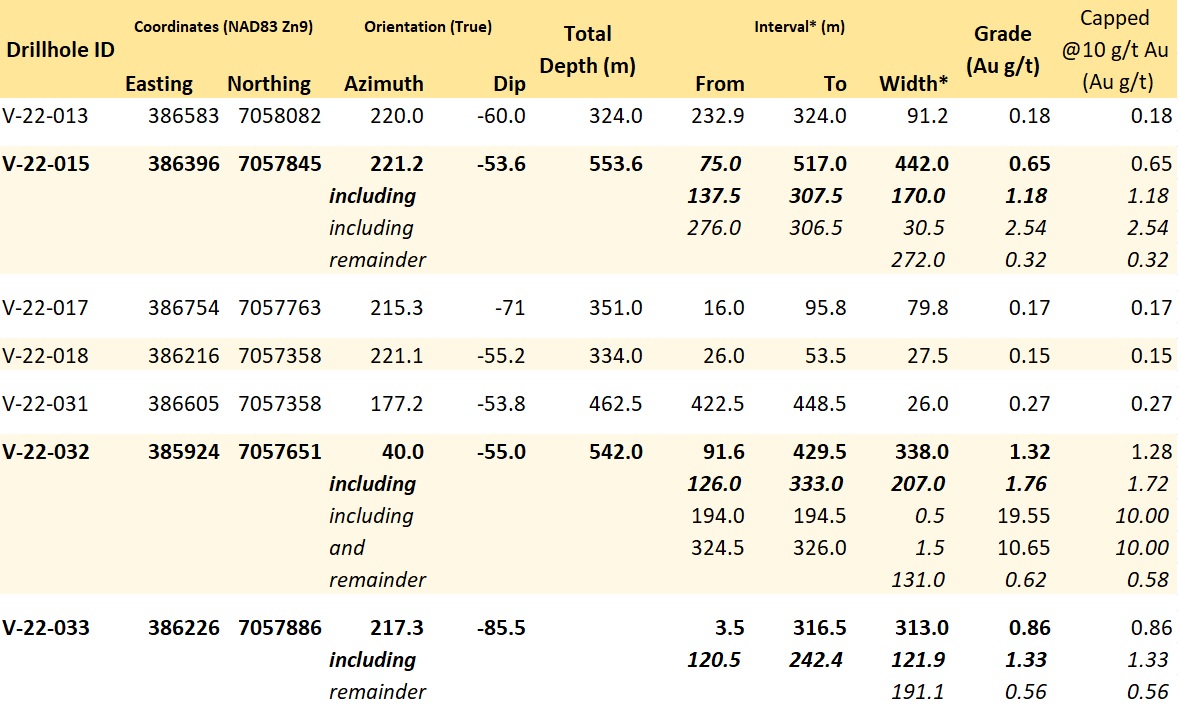 Table 2 - Summary of mineralization in current holes. Several zones of higher grades are present but capping these at 10 g/t Au shows that the intervals are carried by robust mineralization along large zones within these higher-grade holes. *Interval widths reported; true widths of the system are not yet known.

Hole V-22-032 was collared in hornfels sedimentary rock west of the Valley intrusion, and drilled northeast, roughly perpendicular to the general southwest orientation of most drill holes to date at Valley. On crossing into the intrusion at 91.6 m downhole, it averaged 1.32 g/t Au over the subsequent 338.0 m, with a general increase in grades towards a gradational boundary between intrusive phases encountered at 341.5 m downhole. The 100.5 m above this boundary averaged 2.03 g/t Au, including a 20 m stretch near the boundary averaging 4.19 g/t Au.

The hole demonstrates further continuity of near-surface, gram to multiple gram per tonne gold mineralization encountered in previous holes at Valley. The darker, porphyritic phase of the intrusion below the boundary may be a driver for higher grades in the lighter, medium-grained granodiorite above (Figure 4).

As with previous holes at Valley, gold grades are carried across broad intervals, and they are not heavily affected by local high-grade (>10 g/t Au) intersections (Table 2). 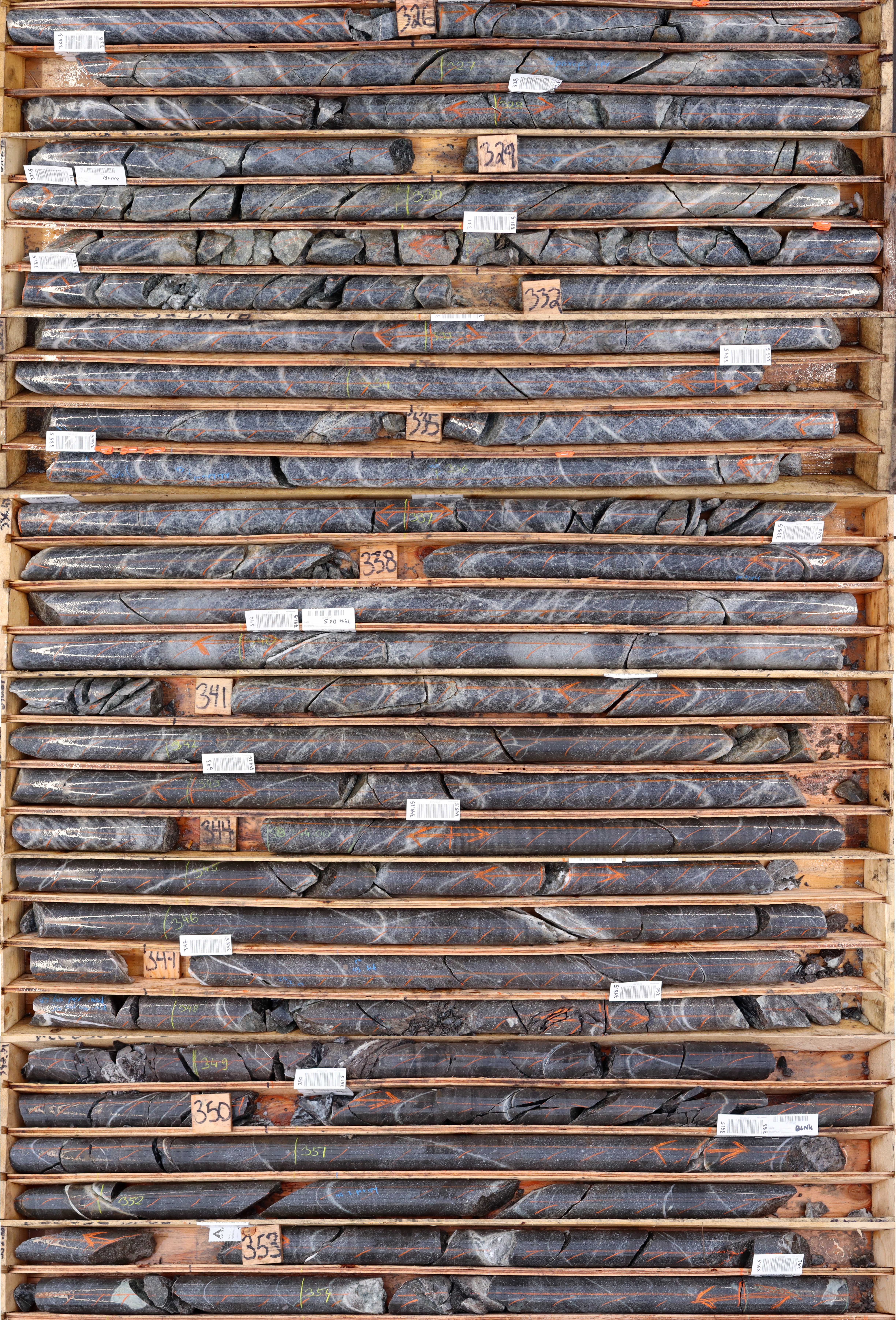 Figure 4 - Intrusive phase boundary in V-22-032, from 325.5 m to 351.7 m downhole, showing heavily veined, medium grained granodiorite above roughly 341.5 m downhole, and a darker, fine-grained porphyritic phase of the intrusion below. The polyphase nature of the intrusion is thought to be a factor in the dense veining and unusually high gold grades encountered at Valley.

Rogue's Valley Zone is a newly discovered, bulk tonnage style, reduced intrusion-related gold system (RIRGS), with geological similarities to multi-million-ounce deposits currently in production like Kinross's Fort Knox Mine in Alaska and Victoria Gold's Eagle Mine in the Yukon. Early drill results demonstrate unusually high gold grades for such a system present near surface across intersections of hundreds of metres. Gold is associated with bismuthinite and telluride minerals hosted in sheeted quartz vein arrays along the margins of and within a one-kilometer-scale, mid-Cretaceous aged Mayo-series intrusion. Valley is an early-stage exploration project without a resource estimate, and while initial results are encouraging, the presence or absence of an economically viable orebody cannot be determined until significant additional work is completed.

The Rogue Project area hosts multiple intrusions similar to Valley along with widespread gold anomalism in stream sediment, soil and rock samples. Elsewhere, RIRGS deposits are known to occur in clusters. The Rogue Project is thus considered by the Company to have district-scale potential for additional reduced intrusion-related gold systems.

The long processing times for analytical results are understood to be due to operational constraints and high sample volumes at the Whitehorse sample preparation facility. To help manage this backlog, ALS Laboratories has sent various Snowline sample batches to Langley, BC, Sudbury, ON and Thunder Bay, ON. The Company expects this to decrease turnaround time for analytical results on the remaining 17 holes drilled at Rogue in 2022. As evidenced by the available results for late-season holes like V-22-032, this process also randomizes the expected order of receipt of remaining analytical results.

On receipt from the drill site, Valley's NQ2-sized drill core was systematically logged for geological attributes, photographed and sampled at Snowline's 2022 field camp. Sample lengths as small as 0.5 m were used to isolate features of interest, otherwise a default 1.5 m downhole sample length was used. Core was cut in half lengthwise along a pre-determined line, with one half (same half, consistently) collected for analysis and one half stored as a record. Standard reference materials, blanks and duplicate samples were inserted by Snowline personnel at regular intervals into the sample stream. Bagged samples were sealed with security tags to ensure integrity during transport. They were delivered by expeditor and by Snowline personnel to ALS Laboratories' preparatory facility in Whitehorse, Yukon, with analyses completed in Vancouver.

ALS is accredited to ISO 17025:2005 UKAS ref 4028 for its laboratory analysis. Samples were crushed by ALS to >70% passing below 2 mm and split using a riffle splitter. 250 g splits were pulverized to >85% passing below 75 microns. A four-acid digest with an inductively coupled plasma mass spectroscopy (ICP-MS) finish was used for 48-element analysis on 0.25 g sample pulps (ALS code: ME-MS61L). All samples were analysed for gold content by fire assay with an atomic absorption spectroscopy (AAS) finish on 30 g samples (ALS code: Au-AA23). Any sample returning >10 g/t Au was reanalysed by fire assay with a gravimetric finish on a 30 g sample (ALS code: Au-GRA21).

Samples with visible gold and other samples returning >2.0 g/t Au by fire assay, along with a set of randomly selected samples, will undergo further processing, analysing the screen rejects to determine whether the screening process could introduce a sampling bias in current results by excluding coarse gold from analysis, resulting in an under-reporting of true grades. Other biases are also possible.

Results reported herein are considered preliminary following receipt of a low but expected percentage of abnormal assays from standard and blank samples inserted by the Company into the Valley sample stream. (Standard samples are prepared by a third-party laboratory to have known quantities of gold, and blank samples are known to contain very limited concentrations of gold.) Reanalysis of samples run along with these reference materials will provide greater certainty in the final assay numbers. These results will be reported if a material difference is identified between the current assays and the re-run sample batches. Based on the widespread and relatively consistent mineralization throughout mineralized zones, however, the Company does not believe that the re-analysis of this relatively small number of samples will have a significant impact on the preliminary mineralized intervals reported herein.

Snowline Gold Corp. is a Yukon Territory focused gold exploration company with a seventeen-project portfolio covering >254,000 ha. The Company is exploring its flagship >111,000 ha Einarson and Rogue gold projects in the highly prospective yet underexplored Selwyn Basin. Snowline's project portfolio sits within the prolific Tintina Gold Province, host to multiple million-ounce-plus gold mines and deposits including Kinross' Fort Knox mine, Newmont's Coffee deposit, and Victoria Gold's Eagle Mine. The Company's first-mover land position and extensive database provide a unique opportunity for investors to be part of multiple discoveries and the creation of a new gold district.

Figure 5 - Project location map for Snowline Gold's eastern Selwyn Basin properties. The Valley and Gracie Zones on the Rogue are the sites of Snowline's 2022 drill programs.

Information in this release has been prepared under supervision of and approved by Thomas K. Branson, M.Sc., P. Geo., Exploration Manager for Snowline and a Qualified Person for the purposes of National Instrument 43-101.

This news release contains certain forward-looking statements, including statements about the Company's drill program, results, implied significance of visual inspection of drill core, and surface work and plans for exploring and expanding a new greenfield, district-scale gold system. Wherever possible, words such as "may", "will", "should", "could", "expect", "plan", "intend", "anticipate", "believe", "estimate", "predict" or "potential" or the negative or other variations of these words, or similar words or phrases, have been used to identify these forward-looking statements. These statements reflect management's current beliefs and are based on information currently available to management as at the date hereof.