Use of this site indicates acceptance of the Privacy Policy and Terms of Use.
The information on this Website is not reliable and not intended to provide tax, legal, or investment advice. Nothing contained on the Website shall be considered a recommendation, solicitation, or offer to buy or sell a security to any person in any jurisdiction.
CEO.CA members discuss high-risk penny stocks which can lose their entire value. Only risk what you can afford to lose.
© 2022 - CEO.CA Technologies Ltd.
@nasdaq/aton-intersects-100-gt-gold-over-1295m-at-rodruin ↻
0 online
Today This week
Search Subscribe
Members of @nasdaq/aton-intersects-100-gt-gold-over-1295m-at-rodruin

VANCOUVER, British Columbia, March 07, 2022 (GLOBE NEWSWIRE) -- Aton Resources Inc. (AAN: TSX-V) (“Aton” or the “Company") is very pleased to update investors on the latest tranche of results from the Phase 2 diamond drilling programme at its advanced Rodruin gold exploration project. Rodruin is located in the Company’s 100% owned Abu Marawat Concession (“Abu Marawat” or the “Concession”), in the Eastern Desert of Egypt.

“We continue to be very pleased with the assay results from the Rodruin diamond drilling programme as they come in,” said Tonno Vahk, Interim CEO. “These latest results again back up our long held interpretation of there being zones of bulk open pittable oxide mineralisation at Rodruin, starting from surface, and we are working hard to quantify these in a maiden MRE as soon as practically possible. We are also very excited by some of the strong copper-zinc sulphide mineralisation which we are currently drilling at depth, and this gives us the belief that there is also going to be a really quite substantial primary sulphide resource at Rodruin, which we are now starting to unlock.”

Drill holes ROD-056 to ROD-061 were all drilled horizontally or at shallow angles at the Central Buttress Zone (“CBZ”) at Rodruin, and were designed to test near-surface gossanous carbonate associated mineralisation (Figure 2). Collar and survey details of the holes are provided in Table 1.

It is also noted that hole ROD-056 encountered a wide zone of voids and cavities between 107.5-118.5m, believed to be related to collapsed and back-filled ancient mine workings. For the purposes of intersection calculation such zones with poor core recovery were allocated zero grades, although the backfill within the ancient workings is typically well mineralised, as has been demonstrated by previous surface sampling at Rodruin. In total, 14.3m of voids and backfilled cavities from hole ROD-056 related to the ancient mine workings were allocated zero grade.

The results from this latest set of holes being reported again confirm the presence of wide zones of near-surface gold(-silver) mineralisation associated with gossanous carbonate rocks at Rodruin. It is anecdotally noted that grades appear to be increasing towards the southern and upper CBZ, higher up on and towards the top of the South Ridge. Previous RC drill intersections included 31m @ 2.45 g/t Au and 12.5 g/t Ag (hole ROP-034, see news release dated January 3, 2018) and 34m @ 2.00 g/t Au (hole ROP-033). These latest results again confirm the potential for a significant volume of oxide mineralisation at the Central Buttress Zone at Rodruin. This mineralisation outcrops over a wide area at surface and this near-surface mineralisation will be readily amenable to open pit mining methods with very low strip ratios.

The current diamond drilling programme has been designed with the objective of testing the potential near surface open pittable resources at the CBZ as well as the Aladdin’s Hill area (see news release dated March 1, 2022), and the GF Zone (Figure 2), which has not yet been drilled in this programme. The drilling is currently focussed on testing the deeper primary sulphide expressions of the near surface mineralisation, and strong primary copper-zinc sulphide mineralisation has now been identified in a second deep hole. The Company will continue to release new drill results as they become available.

Drill core was logged by Aton geologists and marked up for cutting and sampling at the Rodruin core farm. Samples were typically selected over nominal 1m intervals, but as determined by the logged lithologies. The core was half-cut by Aton staff onsite at the recently constructed onsite Rodruin sample preparation laboratory.

Full half-core samples were collected and bagged up in cloth bags, weighed and crushed to -4mm onsite, and split to a nominal c. 250-500g sample size. The coarse crushed reject samples are retained onsite at the Rodruin sample prep lab.

The c. 250-500g dried, crushed and split samples were shipped to ALS Minerals sample preparation facility at Marsa Alam, Egypt where they were pulverised to a size fraction of better than 85% passing 75 microns. From this pulverised material a further sub-sample was split off with a nominal c. 50g size, which was shipped on to ALS Minerals at Rosia Montana, Romania for analysis. 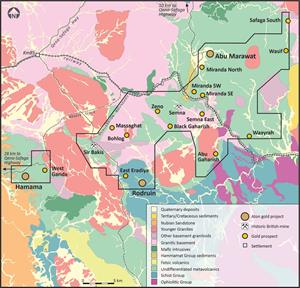 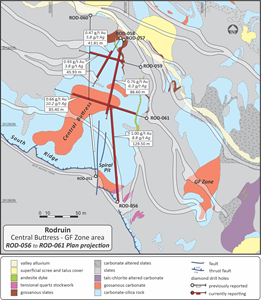