7 May 2021, 10:05
@nasdaq Cartier Files on SEDAR the NI 43-101 Technical Report for the Mineral Resource Estimate of the Chimo Mine Property $ECR
show more ▾

Use of this site indicates acceptance of the Privacy Policy and Terms of Use.
The information on this Website is not reliable and not intended to provide tax, legal, or investment advice. Nothing contained on the Website shall be considered a recommendation, solicitation, or offer to buy or sell a security to any person in any jurisdiction.
CEO.CA members discuss high-risk penny stocks which can lose their entire value. Only risk what you can afford to lose.
© 2016 - Pacific Website Company Inc.
@nasdaq/cartier-cuts-56-gt-au-over-85-m-in-zone-5m4-at-chimo ↻
0 online
Today This week
Search Subscribe
Members of @nasdaq/cartier-cuts-56-gt-au-over-85-m-in-zone-5m4-at-chimo

Zones 5M4 and 5NE were drilled over a length of 900 m from the surface to a depth of 700 m. At this depth, both zones were tested, to date, over an east-west orientation width of 75 m. Zones 5M4 and 5NE remain open in all directions (FIGURE).

« These new results, highlight the importance of prioritizing continued exploration of Zones 5M4 and 5NE in order to maximize the potential of drill results previously reported in the main Zones 5B and 5M » commented Philippe Cloutier, President and CEO.

The details of the new results received from the laboratory are as follows:

Lengths are expressed along drill core axis.  The true thickness was not determined. The Company is currently building wireframes for the 24 mineralized zones and existing infrastructure of the former Chimo Mine in order to determine the dimensions of each mineralized zone as accurately as possible.

Cartier Resources was founded in 2006 and is based out of Val-d'Or, Quebec.  Quebec has consistently ranked high as one of the best mining jurisdictions in the world primarily based on its mineral rich geology, attractive tax environment, and pro-mining government.  In 2018, the Fraser Institute again ranked Quebec as one of the best jurisdictions in the world for investment attractiveness.

All lengths, mentioned in this press release, were measured along the drill core. The NQ core samples are crushed up to 80% passing 8 mesh sieves and then pulverized up to 90% passing a 200-mesh sieve. Cartier inserts 5% of the number of samples in the form of certified standards and another 5% in the form of sterile samples to ensure quality control. The samples are analyzed at the Techni-Lab laboratory (Actlabs), located in Ste-Germaine-Boulé, Quebec. The 50 g pulps are analyzed by fire assay and atomic absorption. For samples containing visible gold, 1,000 g of rock are directly analyzed by the "Metallic Sieve" method.

The scientific and/or technical information presented in this press release has been reviewed and approved by Mr. Gaétan Lavallière, P. Geo., Ph. D. and Vice-President for Cartier Resources.  Mr. Lavallière is a qualified person as defined by National Instrument 43-101.

Neither the TSX Venture Exchange nor its regulatory services provider accepts responsibility for the adequacy or accuracy of this press release. 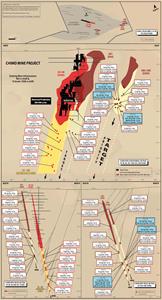