Use of this site indicates acceptance of the Privacy Policy and Terms of Use.
The information on this Website is not reliable and not intended to provide tax, legal, or investment advice. Nothing contained on the Website shall be considered a recommendation, solicitation, or offer to buy or sell a security to any person in any jurisdiction.
CEO.CA members discuss high-risk penny stocks which can lose their entire value. Only risk what you can afford to lose.
© 2016 - Pacific Website Company Inc.
@nasdaq/ceylon-graphite-another-large-discovery-and-999997 ↻
0 online
Today This week
Search Subscribe
Members of @nasdaq/ceylon-graphite-another-large-discovery-and-999997

VANCOUVER, British Columbia, July 02, 2019 (GLOBE NEWSWIRE) -- Ceylon Graphite Corp. (“Ceylon Graphite”) (TSX-V: CYL) (OTC: CYLYF) (FSE: CCY) today announced that it has a made another large new discovery of a 55cm (1ft 6inches) wide crystalline graphite vein at its H1 site, in Meewitiya, Sri Lanka, N-216453 E-130314 under EL/222/R/2.  The discovery was made during the digging of a new shaft at the site. The vein is partially exposed in the side wall of the shaft and its entire width (currently over 45 cms) will not be known until the digging work is completed. The shaft’s position was determined as a result of VLF survey work and drilling conducted at the site.

This discovery, coupled with the recent M1 discovery of another large crystalline graphite vein, clearly shows the robust potential of the Ceylon Graphite land bank. All four existing work sites, K1, M1, P1 and H1, have demonstrated large commercially-mineable graphite. The picture above show the size of the new H1 vein.

Ceylon Graphite also announced that American Energy Technologies Company has tested samples of graphite from the K1 and M1 sites and has certified that through simple Thermal Purification these samples can easily be upgraded and meet the specifications of marketable battery grade graphite. K1 graphite was upgraded to 99.9997wt% Cg and M1 graphite to 99.996 wt% Cg with very little cost incurred. These tests, conducted over the last month, confirm Ceylon Graphite’s near-term goal of producing a premium grade marketable battery grade product for prospective lithium-ion battery manufacturers and other energy storage end-users.

“We continue to find large crystalline graphite veins with purity that has not been seen elsewhere in the world,” said Bharat Prashar, Chief Executive Officer. “We have only begun to develop a small portion of our total land bank, and already we can be confident we may be the quickest-to-market new producer, with the highest quality graphite at the lowest costs seen in today’s market.  We expect to be in commercial production imminently,” he added. “I am very confident Ceylon Graphite will have a significant impact on the graphite and lithium ion battery sectors in 2019 and beyond.”

Robert Marvin, P. Geo (ONT) is a Qualified Person under National Instrument 43-101 and has reviewed and approved the geological information provided in this news release.

Ceylon Graphite Corp, is a public company listed on the TSX Venture Exchange (CYL:TSX-V), that is in the business of exploration and development of graphite mines in Sri Lanka. The Government of Sri Lanka has granted the company exploration rights in a land package of over 120km². These exploration grids (each one square kilometer in area) cover areas of historic graphite production from the early twentieth century and represent a majority of the known graphite occurrences in Sri Lanka. Graphite mined in Sri Lanka is known to be some of the purest in the world, and currently accounts for less than 1% of the world graphite production.

FORWARD LOOKING STATEMENTS: This news release contains forward-looking information as such term is defined in applicable securities laws, which relate to future events or future performance and reflect management's current expectations and assumptions. The forward-looking information includes statements about Ceylon Graphite’s grids, Ceylon Graphite’s plans to undertake additional drilling and to develop a mine plan, Ceylon Graphite’s Mining License application and to commence establishing mining operations. Such forward-looking statements reflect management's current beliefs and are based on assumptions made by and information currently available to Ceylon Graphite, including the assumption that, the drilling exercises will confirm the presence of high quality graphite, sufficient financial resources will be available, the records from the drilling exercises prove to be accurate, there will be no unanticipated delays or costs materially affecting Ceylon Graphite’s exploration, development and production, there will be no material adverse change in metal prices, all necessary consents, licenses, permits and approvals will be obtained, including various Local Government Licenses and the market. Investors are cautioned that these forward-looking statements are neither promises nor guarantees and are subject to risks and uncertainties that may cause future results to differ materially from those expected. Risk factors that could cause actual results to differ materially from the results expressed or implied by the forward-looking information include, among other things, an inability to reach a final acquisition agreement, inaccurate results from the drilling exercises, a failure to obtain or delays in obtaining the required regulatory licenses, permits, approvals and consents, an inability to access financing as needed, a general economic downturn, a volatile stock price, labour strikes, political unrest, changes in the mining regulatory regime governing Ceylon Graphite, a failure to comply with environmental regulations and a weakening of market and industry reliance on high quality graphite. Ceylon Graphite cautions the reader that the above list of risk factors is not exhaustive.

Further information regarding the Company is available at www.ceylongraphite.com 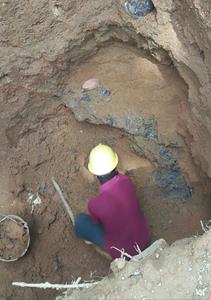