Use of this site indicates acceptance of the Privacy Policy and Terms of Use.
The information on this Website is not reliable and not intended to provide tax, legal, or investment advice. Nothing contained on the Website shall be considered a recommendation, solicitation, or offer to buy or sell a security to any person in any jurisdiction.
CEO.CA members discuss high-risk penny stocks which can lose their entire value. Only risk what you can afford to lose.
© 2016 - Pacific Website Company Inc.
@nasdaq/compass-determines-key-structural-controls-on-gold ↻
0 online
Today This week
Search Subscribe
Members of @nasdaq/compass-determines-key-structural-controls-on-gold

TORONTO, June 29, 2020 (GLOBE NEWSWIRE) -- Compass Gold Corp. (TSX-V: CVB) (Compass or the Company) is pleased to provide an update on the recently completed drilling at the Sodala prospect, located on the Company’s Sikasso Property in southern Mali (Figure 1).

Compass CEO, Larry Phillips, said, “Additional bedrock drilling on the Sankarani East permit has identified gold mineralization within a newly discovered shear zone centred on the Sodala artisanal workings.  The results of this latest drilling validate Sodala as a major target for additional geophysical testing and follow-up drilling.  This work has also given us a much clearer understanding of the controls on mineralization, and explains the location of a pronounced soil anomaly, which includes a 31.3 g/t Au sample collected by Compass.”

He added, “As we’ve recently reported, geophysical and geological testing has led to our discovery of two new mineralized trends at Tarabala and Samagouela, and it now appears that Sodala lies on a similar structure.  We have abundant evidence that several permits within our 850-square-kilometre property display the necessary geological features to potentially host open-pittable gold deposits, all within one of the most prolific gold districts in the world.”

Sodala Drilling Overview
In mid-April, the Company completed 310 m of shallow air core (AC) drilling over 175 m of artisanal workings at Sodala on the western side of the Sankarani East permit (Figure 1).  This was the first drilling on the prospect, and focused on artisanal workings occurring within a 270-m-wide shear-zone, and cut by NE-trending faults that appear to control mineralization.  The latest drilling comprised 377 m of AC and 90 m of reverse circulation (RC) drilling. The purpose of the drilling was to determine the grade, width, and orientation of mineralization recorded at the artisanal workings, and to use this information to identify the mineralized structures responsible for some exceptionally high shallow soil samples collected in 2018.  The high-grade samples were collected within 700 m of the artisanal workings and the five highest recorded soil grades were 31.3, 10.1, 2.49, 1.29 and 0.50 g/t Au.

Previous drilling on the prospect (see Compass press release, May 7, 2020) identified three narrow, near-surface, mineralized structures with 1 m @ 0.78 g/t Au (from 1 m, SAAC29), 1 m @ 2.71 g/t Au (from 16  m, SAAC31), and 1 m @ 0.82 g/t Au (from 8 m, , SAAC32).  All of mineralization was associated with a small hydrothermally altered felsic unit.  The current drilling was planned to test the same mineralization in order to determine the precise orientation and dip of the veins.

The current drilling comprised a single fence of predominantly AC holes.  In order to achieve the planned depth, the drill rig was reconfigured to use reverse circulation (RC) equipment in areas where more resistant quartz veins were encountered.  The fence was specifically designed to test gold-bearing quartz veins mapped in the artisanal workings and noted in the drilling in April, and the interpretation of Gradient IP geophysics that the workings were coincident with a major north-south shear zone.

Drilling revealed the veins were present within a graphite-rich shear zone, and determined that the veins dip between 40 and 75°and trend to the northwest (325°).  All this information is consistent with geological mapping in the area, and interpretation of the ground geophysical surveys.

Figure 2:  Satellite map of the Sodala prospect showing the location of bedrock drilling in relation to the target structure is available at https://www.globenewswire.com/NewsRoom/AttachmentNg/57da2b7e-9aee-4fa5-ae88-09155096e6ea

1True thicknesses are interpreted as 60-90% of stated intervals

All AC drill holes in this campaign (SAAC57-64) were drilled on an azimuth of 255° (towards the west-southwest), at dips of 55°, with lengths varying from 48 m to 54 m.  The fence was planned to cut the main artisanal workings at Sodala at the intersection between the main north-south trending Sodala shear-zone and a northeast-trending splay fault.  The site of the workings is also coincident with an interpreted highly-altered felsic intrusion and proximal to an exceptionally high shallow soil gold anomaly with assays up to 31.30 g/t Au.  This is the highest grade of 6,749 soil samples collected on the Sankarani and Sankarani East permits by Compass.  Soil samples greater than 0.5 g/t Au are present up to 750 m from the workings, and appear to correlated closely with a second northeast-trending splay fault with a 1000 m strike length.  This area will be the primary focus of additional drilling in the coming months.

The technical team, which is only awaiting infill shallow soil assay results from Massala (Sankarani permit), is interpreting the results from all recent exploration programs, and placing them in a geological framework.  These latest drilling results will help to determine the precise location for follow-up drilling on the identified target structures at Tarabala, Sodala and Samagouela.  This drilling will start when weather conditions permit after the cessation of the rainy season, normally in October.  Gradient IP surveys are also being planned in areas containing strong gold in shallow soil anomalism coincident with regional target structures.

Compass, a public company having been incorporated into Ontario, is a Tier 2 issuer on the TSX- V. Through the 2017 acquisition of MGE and Malian subsidiaries, Compass holds gold exploration permits located in Mali that comprise the Sikasso Property.  The exploration permits are located in three sites in southern Mali with a combined land holding of 867 km2.   The Sikasso Property is located in the same region as several multi-million-ounce gold projects, including Morila, Syama, Kalana and Komana.  The Company’s Mali-based technical team, led in the field by Dr. Madani Diallo and under the supervision of Dr. Sandy Archibald, P.Geo, is conducting the current exploration program. They are examining numerous anomalies first noted in Dr. Archibald’s August 2017 “National Instrument 43-101 Technical Report on the Sikasso Property, Southern Mali.”

All AC samples were collected following industry best practices, and an appropriate number and type of certified reference materials (standards), blanks and duplicates were inserted to ensure an effective QAQC program was carried out.  The 1 m interval samples were prepared and analyzed at SGS SARL (Bamako, Mali) by fire assay technique FAE505.  All standard and blank results were reviewed to ensure no failures were detected. 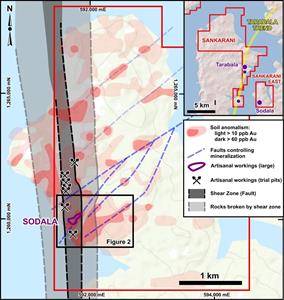 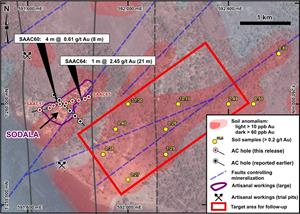 Satellite map of the Sodala prospect showing the location of bedrock drilling in relation to the target structure.