Use of this site indicates acceptance of the Privacy Policy and Terms of Use.
The information on this Website is not reliable and not intended to provide tax, legal, or investment advice. Nothing contained on the Website shall be considered a recommendation, solicitation, or offer to buy or sell a security to any person in any jurisdiction.
CEO.CA members discuss high-risk penny stocks which can lose their entire value. Only risk what you can afford to lose.
© 2016 - Pacific Website Company Inc.
@nasdaq/compass-gold-field-work-starts-on-farabakoura-trend ↻
0 online
Today This week
Search Subscribe
Members of @nasdaq/compass-gold-field-work-starts-on-farabakoura-trend

TORONTO, Nov. 06, 2019 (GLOBE NEWSWIRE) -- Compass Gold Corp. (TSX-V: CVB) (Compass or the Company) announces that it has launched its follow-up field program on the Farabakoura Trend, which includes the Farabakoura and Kabangoué artisanal workings and the high-priority Boumban prospect, on its Sikasso Property in Southern Mali.

Compass CEO, Larry Phillips, commented, “With the end of the wet season, we are now deploying our field teams to prepare our drilling sites for our next exciting drilling program. In addition to the main Farabakoura zone, we will be drilling on five additional prospect areas, where we hope to confirm the presence of bedrock gold indicated so far by near surface geochemistry and the presence of artisanal workings. The proposed 10,500 m RC drilling program will go a long way to confirming the prospectivity of these areas, with the aim of determining the best location for resource definition drilling. We expect that it will take three weeks to prepare the drilling pads, and for the ground conditions to allow the safe movement of our drilling equipment.”

Proposed Bedrock Drilling
Based on the results of this highly successful drilling, the Company has planned 10,500 m of RC drilling on six prospects within the Sikasso permit. The areas are Farabakoura, Kabangoué, Boumban, Tarabala, Sodala, and Samagouela (Figure 1).

Weather conditions in the field area are improving due to the end of the rainy season. Compass field teams are currently checking the site access and the water levels in the various water courses that cut the project area. It is anticipated that a bulldozer can move onto the Ouassada permit within the next week to start the preparation of the drilling pads at Farabakoura and Kabangoue, with drilling currently scheduled to begin in late November.

About Compass Gold Corp.
Compass, a public company having been incorporated into Ontario, is a Tier 2 issuer on the TSX Venture Exchange (TSX-V). Through the 2017 acquisition of MGE and Malian subsidiaries, Compass holds gold exploration permits located in Mali that comprise the Sikasso Property. The exploration permits are located in three sites in southern Mali with a combined land holding of 867 km2. The Sikasso Property is located in the same region as several multi-million ounce gold projects, including Morila, Syama, Kalana and Yanfolila. The Company’s Mali-based technical team, led in the field by Dr. Madani Diallo and under the supervision of Dr. Sandy Archibald, P.Geo, is executing a new exploration program. They are examining the first of numerous anomalies noted for further investigation in Dr. Archibald’s August 2017 “National Instrument 43-101 Technical Report on the Sikasso Property, Southern Mali.”

A photo accompanying this announcement is available at https://www.globenewswire.com/NewsRoom/AttachmentNg/1a40209c-88af-445b-bbf6-02257bbd9bca

1 True thicknesses are interpreted as 60-90% of stated intervals. 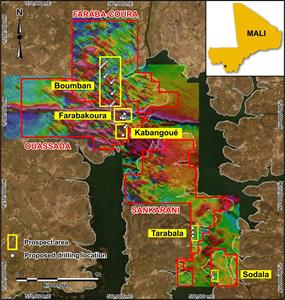 Location of five prospects (yellow rectangles) where the planned 10,500 m RC drilling program will be undertaken. 800 m of drilling will also be performed at Samagouela (Kourou permit), 30 km south of the Sodala prospect. The background image consists of a filtered high-resolution airborne magnetic image overlain on a satellite image.