Use of this site indicates acceptance of the Privacy Policy and Terms of Use.
The information on this Website is not reliable and not intended to provide tax, legal, or investment advice. Nothing contained on the Website shall be considered a recommendation, solicitation, or offer to buy or sell a security to any person in any jurisdiction.
CEO.CA members discuss high-risk penny stocks which can lose their entire value. Only risk what you can afford to lose.
© 2021 - CEO.CA Technologies Ltd.
@nasdaq/corvus-gold-expands-main-zone-with-884m-192-gt ↻
0 online
Today This week
Search Subscribe
Members of @nasdaq/corvus-gold-expands-main-zone-with-884m-192-gt

VANCOUVER, British Columbia, Feb. 25, 2020 (GLOBE NEWSWIRE) -- Corvus Gold Inc. (“Corvus” or the “Company”) - (TSX: KOR, OTCQX: CORVF) announces it has received additional positive results from its ongoing Main Zone infill and step-out Phase-4 drill program (Table 1).  These latest results are from targets designed to infill unestimated parts of the 2018 mineral resource model, to potentially extend the deposit deeper and probe the eastern side of the property (Figure 1).  Results appear to be encouraging for expanding the Mother Lode mineral resource as the grade and thickness of the intervals are higher and broader than previously known.  In addition, the latest holes have expanded the new oxide Central Intrusive Zone (CIZ) below the Main Zone, although drilling conditions remain difficult upon entering the zone and both holes were terminated prematurely (lost), in the upper part of the CIZ.

Similar to the previous hole, ML20-131 (56.4m @1.92 g/t Au & 4.6m @ 1.43 g/t Au at the top of CIZ) was drilled to infill an area with limited drill data between holes ML17-012 (NR17-19, Dec 12, 2017, 29m @ 1.53 g/t Au, stopped before the CIZ) and ML17-019 (NR18-01, Jan 10, 2018, 35.1m @ 1.97 g/t Au stopped before the CIZ).  The new results indicate the mineralized zone is broader and higher grade and could be accretive for the new mineral resource model.  To thoroughly explore and quantify the new CIZ oxide target, Corvus will be utilizing more core tail type drilling which should increase our ability to get completely through the larger and higher-grade areas of this new zone.  Hole ML20-129 (9.1m @ 0.67 g/t Au) was designed to test the eastern boundary of the Mother Lode property where it appears the system is limited in this area, although just east of the property boundary the adjacent owner (Coeur Mining) is pursuing the northern extension of the SNA deposit which lies to the southeast of the Mother Lode property.

Jeffrey Pontius, President and CEO of Corvus, said, “The ongoing infill/step-out part of the Phase-4 drill program has generated favorable results for expansion of the overall Mother Lode mineral resource model.  In addition, the continued positive indication from the bottoms of these holes, showing a sizable oxide system at CIZ, is encouraging and Corvus will direct some of its deeper core tail drilling program toward evaluating the zones significance and its relationship to the deep intrusion target currently being tested.  As we continue to gain more and more data on the impressive Mother Lode deposit, we will work to apply that data to our new discovery targets to the north, west and east of Mother Lode on Corvus Gold’s extensive land position.”

Jeffrey A. Pontius (CPG 11044), a qualified person as defined by National Instrument 43-101 – Standards of Disclosure for Mineral Projects (“NI 43-101”), has supervised the preparation of the scientific and technical information that forms the basis for this news release and has approved the disclosure herein.  Mr. Pontius is not independent of Corvus, as he is the CEO & President and holds common shares and incentive stock options.

Carl E. Brechtel, (Nevada PE 008744 and Registered Member 353000 of SME), a qualified person as defined by NI 43-101, has coordinated execution of the work outlined in this news release and has approved the disclosure herein. Mr. Brechtel is not independent of Corvus, as he is the COO and holds common shares and incentive stock options.

The work program at Mother Lode was designed and supervised by Mark Reischman, Corvus’ Nevada Exploration Manager, who is responsible for all aspects of the work, including the quality control/quality assurance program.  On-site personnel at the project log and track all samples prior to sealing and shipping.  Quality control is monitored by the insertion of blind certified standard reference materials and blanks into each sample shipment.  All mineral resource sample shipments are sealed and shipped to American Assay Laboratories (AAL) in Reno, Nevada, for preparation and assaying.  AAL is independent of the Company.  AAL’s quality system complies with the requirements for the International Standards ISO 9001:2000 and ISO 17025:1999.  Analytical accuracy and precision are monitored by the analysis of reagent blanks, reference material and replicate samples.  Finally, representative blind duplicate samples are forwarded to AAL and an ISO compliant third-party laboratory for additional quality control.  Mr. Pontius, a qualified person, has verified the data underlying the information disclosed herein, including sampling, analytical and test data underlying the information by reviewing the reports of AAL, methodologies, results and all procedures undertaken for quality assurance and quality control in a manner consistent with industry practice, and all matters were consistent and accurate according to his professional judgement.  There were no limitations on the verification process.

Mr. Scott E. Wilson, CPG (10965), Registered Member of SME (4025107) and President of Resource Development Associates Inc., is an independent consulting geologist specializing in Mineral Reserve and Mineral Resource calculation reporting, mining project analysis and due diligence evaluations.  He is acting as the Qualified Person, as defined in NI 43-101, and is the primary author of the Technical Report for the Mineral Resource estimate and has reviewed and approved the Mineral Resource estimate and the Preliminary Economic Assessment summarized in this news release.  Mr. Wilson has over 29 years of experience in surface mining, mineral resource estimation and strategic mine planning. Mr. Wilson is President of Resource Development Associates Inc. and is independent of the Company under NI 43-101.

Mr. Wilson, a qualified person, has verified the data underlying the information disclosed herein, including sampling, analytical and test data underlying the information by reviewing the reports of AAL, methodologies, results and all procedures undertaken for quality assurance and quality control in a manner consistent with industry practice, and all matters were consistent and accurate according to his professional judgement.  There were no limitations on the verification process.

Metallurgical testing on North Bullfrog and Mother Lode samples has been performed by McClelland Analytical Services Laboratories Inc. of Sparks Nevada (“McClelland”), McClelland is an ISO 17025 accredited facility that supplies quantitative chemical analysis in support of metallurgical, exploration and environmental testing using classic methods and modern analytical instrumentation.  McClelland has met the requirements of the IAS Accreditations Criteria for Testing Laboratories (AC89), has demonstrated compliance with ANS/ISO/IEC Standard 17025:2005, General requirements for the competence of testing and calibration laboratories, and has been accredited, since November 12, 2012. Hazen Research Inc. (“Hazen”), an independent laboratory, has performed flotation, AAO testing and cyanide leach testing on samples of sulphide mineralization from the YellowJacket zone and Swale area of Sierra Blanca, and roasting tests on Mother Lode flotation concentrate. Hazen holds analytical certificates from state regulatory agencies and the US Environmental Protection Agency (the “EPA”).  Hazen participates in performance evaluation studies to demonstrate competence and maintains a large stock of standard reference materials from the National Institute of Standards and Technology (NIST), the Canadian Centre for Mineral and Energy Technology (CANMET), the EPA and other sources.  Hazen’s QA program has been developed for conformance to the applicable requirements and standards referenced in 10 CFR 830.120 subpart A, quality assurance requirements, January 1, 2002. Pressure oxidation test work on Mother Lode concentrate samples was performed by Resource Development Inc. of Wheatridge, CO.

Corvus controls 100% of its North Bullfrog Project, which covers approximately 90.5 km2 in southern Nevada.  The property package is made up of a number of private mineral leases of patented federal mining claims and 1,134 federal unpatented mining claims.  The project has excellent infrastructure, being adjacent to a major highway and power corridor as well as a large water right. The Company also controls 445 federal unpatented mining claims on the Mother Lode project which totals approximately 36.5 km2 which it owns 100%.  The total Corvus 100% land ownership now covers over 127 km2, hosting two major new Nevada gold discoveries.

Corvus Gold Inc. is a North American gold exploration and development company, focused on its near-term gold-silver mining project at the North Bullfrog and Mother Lode Districts in Nevada.  Corvus is committed to building shareholder value through new discoveries and the expansion of its projects to maximize share price leverage in an advancing gold and silver market.

On behalf of
Corvus Gold Inc.

This press release contains forward-looking statements and forward-looking information (collectively, “forward-looking statements”) within the meaning of applicable Canadian and US securities legislation.  All statements, other than statements of historical fact, included herein, including, without limitation, statements regarding the advancement and development of our Mother Lode project and the expansion of our drill program; plans for drilling; expectations of, timing and potential for additional resources or mineralization; expectations regarding the potential for future open-pit and underground mining; expectations for types of mineralization; updates on the development progress at the Mother Lode project; the potential for new deposits and discoveries and expected increases in a system’s potential; expectations regarding the potential expansion of the Bullfrog mining district; anticipated content, commencement and cost of exploration programs, anticipated exploration program results, are forward-looking statements.  Although the Company believes that such statements are reasonable, it can give no assurance that such expectations will prove to be correct.  Forward-looking statements are typically identified by words such as: believe, expect, anticipate, intend, estimate, postulate and similar expressions, or are those, which, by their nature, refer to future events.  The Company cautions investors that any forward-looking statements by the Company are not guarantees of future results or performance, and that actual results may differ materially from those in forward looking statements as a result of various factors, including, but not limited to, variations in the nature, quality and quantity of any mineral deposits that may be located, variations in the market price of any mineral products the Company may produce or plan to produce, the Company's inability to obtain any necessary permits, consents or authorizations required for its activities, the Company's inability to produce minerals from its properties successfully or profitably, to continue its projected growth, to raise the necessary capital or to be fully able to implement its business strategies, and other risks and uncertainties disclosed in the Company’s Annual Report on Form 10-K for the fiscal year ended May 31, 2019 filed with certain securities commissions in Canada and the Company’s most recent filings with the United States Securities and Exchange Commission (the “SEC”).  All of the Company’s Canadian public disclosure filings in Canada may be accessed via www.sedar.com and filings with the SEC may be accessed via www.sec.gov and readers are urged to review these materials, including the technical reports filed with respect to the Company’s mineral properties. 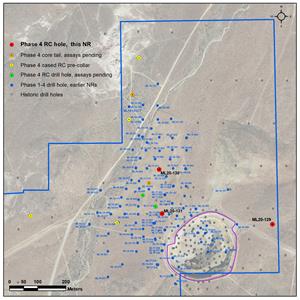 Location of Drill Holes at the Nevada, Mother Lode Project