Use of this site indicates acceptance of the Privacy Policy and Terms of Use.
The information on this Website is not reliable and not intended to provide tax, legal, or investment advice. Nothing contained on the Website shall be considered a recommendation, solicitation, or offer to buy or sell a security to any person in any jurisdiction.
CEO.CA members discuss high-risk penny stocks which can lose their entire value. Only risk what you can afford to lose.
© 2016 - Pacific Website Company Inc.
@nasdaq/drilling-update-at-vrs-ranoke-copper-gold-property ↻
0 online
Today This week
Search Subscribe
Members of @nasdaq/drilling-update-at-vrs-ranoke-copper-gold-property

From VR’s CEO, Dr. Michael H. Gunning, “We can’t drill without water, and as of late last week, all surface waters at Ranoke were completely frozen, all ponds and all creeks.  Delays and difficulties related to water has both impeded the length of the holes completed, and pushed our drill costs to unacceptable levels, so in the broader context of current market uncertainty and volatility, VR is responding by suspending drilling with three holes complete, with plans to return later this spring or summer to complete the first-pass drill program when ground conditions for water will foster more efficient drilling.  Strategic thinking is required during the current market cycle, and VR will recognize that this is simply not the right time to be fighting our drill costs. We continue to advance our Big Ten gold project in the Walker Lane in Nevada, with news to follow.  The Company is well funded to execute its strategies for 2020, reporting a $2.2m working capital in February.”

As shown on Figure 1, three holes are now complete at Ranoke, all to the depth of between 500 - 650 metres.  They constitute a north-south transect across the western part of the main gravity anomaly, and across the southern contact of the main magnetic anomaly.  The next four holes will form an east-west transect across Ranoke, including the eastern part of the gravity anomaly:

As shown in Figure 3, fluorite-carbonate veins were intersected in a basement intrusion in Hole 3.  The fluorite is magmatically derived and hydrothermally precipitated.  The fluorite veins in Hole 3 are significant: 1. Fluorite grains occur with copper and gold grains in the multi-element anomaly in the regional OGS geochemical survey data, and; 2. Fluorite is a key attribute in the mineral deposit model for an iron oxide copper-gold breccia body or carbonatite intrusion targeted at Ranoke.

The north-trending fault shown on Figure 1 which forms the western boundary of the Ranoke complex is evident on all inversion and derivative products from both the gravity and magnetic surveys.  Holes 4 and 5 will test the possibility for structurally-controlled mineralization at Ranoke along this fault.

The east-west fault shown on Figure 1 is based on the disruption of the otherwise coherent, high intensity gravity anomaly.  Hole 1 completed in November and located near the fault intersected numerous specularite veins, and iron carbonate breccia zones and potassium alteration (see news release dated Nov. 4, 2019); Holes 6 and 7 will follow this up and test the center of the magnetic low coincident with the eastern arm of the gravity anomaly for mineralization related to this structure.

Ranoke has never been drilled.  The goal of this first pass drill program is unchanged: to fully test the centers of the IP, gravity and magnetic geophysical anomalies, and coincident soil gas geochemical anomalies, for copper and gold hosted in a large-scale, hydrothermal iron oxide breccia body or carbonatite intrusion emplaced into older Archean gneiss along the western margin of the Kapuskasing structural zone which bisects the Archean Superior craton, and has a long-lived history of mafic and carbonatite intrusions and kimberlitic diatremes which collectively span nearly 1.6 billion years of activity.

The Company will report any material geochemistry when the program is complete and data are in hand from all of the drill holes.

The helicopter-assisted drilling at Ranoke is based out of a road-accessible trailer camp located at the near-by Ontario Power Generation hydro-electric facility at Otter Rapids.

The Ranoke property is located in northern Ontario, Canada.  Infrastructure in the region is shown on location figures provided at the Company’s website at www.vrr.ca.  The property is 15 kilometers west of the CNR railway spur which supplies Moosonee located on tide water 100 kilometres to the northeast, and is 25 kilometres north of road access to Otter Rapids, an Ontario hydro-electric facility serviced by Highway 634.  Exploration at Ranoke is facilitated by the town of Cochrane which is located about 100 kilometres to the south on the Trans Canada Highway, and is the major service hub to the region.

The Ranoke property is large.  It consists of 360 claims in one contiguous block covering 7,400 ha covering a 12 x 12 km area. The Ranoke property was staked directly by VR.  It is owned 100% by VR, and is free and clear of any interests or royalties.

Summary technical and geological information on the Company’s various exploration properties is available at the Company’s website at www.vrr.ca.

Technical information for this news release has been prepared in accordance with the Canadian regulatory requirements set out in National Instrument 43-101.  Justin Daley, P.Geo., Principal Geologist at VR and a non-independent Qualified Person oversees and/or participates in all aspects of the Company’s mineral exploration projects.  The content of this news release has been reviewed on behalf of the Company by the CEO, Dr. Michael Gunning, P.Geo., a non-independent Qualified Person.

VR is an emerging junior exploration company focused on large, underexplored copper-gold mineral systems in the western United States and Canada (TSX.V: VRR; Frankfurt: 5VR; OTCBB: VRRCF).  It is the continuance of 4 years of exploration in Nevada by a private exploration company, with a foundation built upon the diverse experience and proven track record of its Board in early-stage mineral exploration, discovery and M&A.  VR is well financed for its exploration strategy.  It owns its properties outright, and evaluates new opportunities on an ongoing basis, whether by staking or acquisition.

This press release contains forward-looking statements.  Forward-looking statements are typically identified by words such as: believe, expect, anticipate, intend, estimate, and similar expressions or are those which, by their nature, refer to future events.  Forward looking statements in this release include, but are not limited to: “VR is responding by suspending drilling with three holes complete, with plans to return later this spring or summer to complete the first-pass drill program when ground conditions for water will foster more efficient drilling.”

Photos accompanying this release are available at: 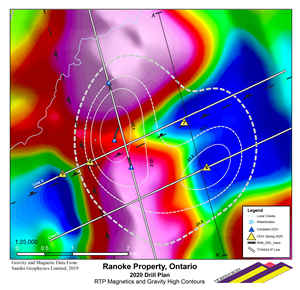 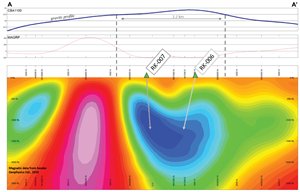 North-south Section through the 3D magnetic inversion block model for Ranoke, showing the drill holes planned for the main, integrated target of gravity high and magnetic low anomalies. Heavy dashed lines are the margins of the gravity anomaly. 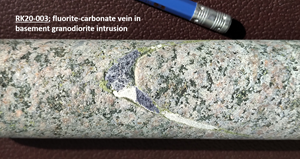 Vein of fluorite-calcite-epidote cutting across foliation in Archean granodiorite intrusion at Ranoke.