Use of this site indicates acceptance of the Privacy Policy and Terms of Use.
The information on this Website is not reliable and not intended to provide tax, legal, or investment advice. Nothing contained on the Website shall be considered a recommendation, solicitation, or offer to buy or sell a security to any person in any jurisdiction.
CEO.CA members discuss high-risk penny stocks which can lose their entire value. Only risk what you can afford to lose.
© 2016 - Pacific Website Company Inc.
@nasdaq/eloro-resources-intersects-1227-g-ag-eqt-over-1236m ↻
0 online
Today This week
Search Subscribe
Members of @nasdaq/eloro-resources-intersects-1227-g-ag-eqt-over-1236m

TORONTO, May 26, 2021 (GLOBE NEWSWIRE) -- Eloro Resources Ltd. (TSX-V: ELO; OTCQX: ELRRF FSE: P2QM) (“Eloro”, or the “Company”) is pleased to provide an update on its Iska Iska silver-tin polymetallic project in Potosi Department, southern Bolivia. To date, the Company has completed 33 diamond drill holes totalling 14,346.7 metres (“m”) to test the Huayra Kasa Mine area, Santa Barbara Breccia Pipe (“SBBP”) and Central Breccia Pipe (“CBP”) targets. This press release reports drilling results from hole DSB-07 which tested the SBBP. Currently three drill rigs are in operation at Iska Iska. Two surface drill rigs are testing the Central Breccia from the northern and southern radial setups and one underground drill is testing the target area east of SBBP. Figure 1 is a geological plan map depicting the locations of the drill holes with updated geological interpretation. Figure 2 is a NW-SE longitudinal section along the axis of the 800m long SBBP, showing the location of the main mineralized zone and of Hole DSB-07. Table 1 details significant drilling results and Table 2 lists holes completed with assays pending and holes in progress. Highlights are as follows:

Hole DSB-07 drilled at -60 degrees to a depth of 683.4m to the southeast from the radial drill platform on SBBP intersected multiple mineralized intercepts including:

Tom Larsen, Chairman and CEO of Eloro said: “The results from DSB-07 are most encouraging and continue to demonstrate the diversified metal value and size potential of the Iska Iska silver-tin polymetallic system. The Leduc drilling program at site, which currently consists of 3 drills (two surface and one underground), is progressing very efficiently at the rate of 250m to 300m per day, resulting in a very positive discovery pace. Currently we have approximately 1,500 samples awaiting analysis at the ALS Global Laboratory in Lima. In particular, we are eagerly awaiting results of hole DSB-10, which as previously reported (see May 4, 2021 press release), intersected over 500 m of continuous sulphide mineralization. While there have been delays in assay turnaround, due to COVID-19 protocols restricting critical supplies to the laboratory, particularly oxygen, we are optimistic that conditions will improve in the near future and turnaround will return to more normal levels.”

Dr. Bill Pearson, P.Geo., Eloro’s Executive Vice President Exploration, stated: “We are continuing to aggressively explore the very extensive mineralized system at Iska Iska. Hole DSB-07 returned significant mineralization over substantive widths from both the SBBP and the underlying granodioritic intrusion breccia. The detailed ground magnetic survey, which consisted of 181.5 linekm at 50m line spacing, is now complete and the data is being processed by our geophysicists. Down-hole Induced Polarization (“IP”) surveys are expected to commence in the latter part of June. A drill bay is under construction at the west end of the Santa Barbara adit to provide a base for underground drill testing of the central part of the caldera which will commence following the completion of underground drilling at Huayra Kasa.   After Holes DCS-02 and DCS-03 are finished on the southern radial setup on the CBP, the drill will be moved to the Porco (South) target to carry out radial drilling at that location.”

Note: True width of the mineralization is not known at the present time, but based on the current understanding of the relationship between drill orientation/inclination and the mineralization within the breccia pipes and the host rocks such as sandstones and dacites. It is estimated that true width ranges between 70% and 90% of the down hole interval length but this will be confirmed by further drilling. Percentage metal contents are shown for each element.

In calculating the intersections reported in this press release a sample cutoff of 30 g Ag eq/t was used with generally a maximum dilution of 3 continuous samples below cutoff included within a mineralized section, unless more dilution is justified geologically.

Table 2: Summary of Diamond Drill Holes Completed With Assays Pending and Drill Holes In Progress at Iska Iska from the May 26, 2021 press release.

Total drilling completed since the start of the program on September 13, 2020 is 14,346.7m in 33 holes (13 underground holes and 20 surface holes) with one underground and two surface holes in progress.

Drill samples are prepared in ALS Bolivia Ltda’s preparation facility in Oruro, Bolivia with pulps sent to the main ALS Global laboratory in Lima for analysis, As announced in the February 26, 2021 press release, Eloro has changed the assay protocol to utilize X-ray fluorescence (XRF) to more accurately analyze higher Sn. Tin in the CBP is suspected to occur as cassiterite which is insoluble in acid digestion, and therefore not suited for wet chemical techniques. In addition, other assay protocols have been changed to provide for a more accurate measurement of the wide-ranging suite of polymetallic metals at Iska Iska. Eloro employs an industry standard QA/QC program with standards, blanks and duplicates inserted into each batch of samples analyzed with selected check samples sent to a separate accredited laboratory.

Unfortunately, the ALS Global laboratory in Lima where the Iska Iska samples are being analyzed has had major delays in turnaround time due to the impact of the COVID-19 lockdown of Lima by the Peruvian government. This has restricted availability of critical supplies necessary to carry out analytical work. As a result, there will be delays in reporting of assay results.

Iska Iska silver-tin polymetallic project is a road accessible, royalty-free property, wholly-controlled by the Title Holder, Empresa Minera Villegas S.R.L. and is located 48 km north of Tupiza city, in the Sud Chichas Province of the Department of Potosi. The property can be classified as a silver-tin polymetallic (Ag, Zn, Pb, Au, Cu, Bi, Sn, In) and porphyry-epithermal complex. This is an important mineral deposit type in the prolific South Mineral Belt of Bolivia.

Silver-tin polymetallic mineralization at Iska Iska occurs within a Miocene possibly collapsed/resurgent caldera that consists of granodioritic stocks and five (5) dacitic domes which are each about 500m in diameter. These rocks intrude/extrude an intensely deformed sequence of Ordovician shales, siltstones, and sandstones, which are partially covered by Miocene pyroclastic rocks. The silver polymetallic mineralization occurs mainly as veins, vein swarms, veinlets, stockworks, disseminations and in breccias associated with intense hydrothermal alteration. The Iska Iska dome complex has several major phases of igneous breccias, quartz porphyries, dikes and dacitic syn-kinematic flows.

On January 26, 2021, Eloro announced significant results from drilling at the Santa Barbara Breccia Pipe. Highlights are as follows:

Silver-tin polymetallic mineralization within the Iska Iska system occurs over a potential strike length of more than 2.5km along major ring structures in the caldera complex.   A synchrotron study of the underground channel samples (see press release dated June 25, 2020) concluded that the mineral cluster analysis identified four mineralogical domains that cover the entire sampling area suggesting they are related and represent a single, large mineralizing system. Furthermore, the mineralogy of the domains is consistent with minerals identified in hand specimen and are likely related to a telescoped porphyry/epithermal style of mineralization.

Eloro is an exploration and mine development company with a portfolio of gold and base-metal properties in Bolivia, Peru and Quebec. Eloro has an option to acquire a 99% interest in the highly prospective Iska Iska Property, which can be classified as a polymetallic epithermal-porphyry complex, a significant mineral deposit type in the Potosi Department, in southern Bolivia. Eloro commissioned a NI 43-101 Technical Report on Iska Iska, which was completed by Micon International Limited and is available on Eloro’s website and under its filings on SEDAR. Iska Iska is a road-accessible, royalty-free property. Eloro also owns an 82% interest in the La Victoria Gold/Silver Project, located in the North-Central Mineral Belt of Peru some 50 km south of Barrick’s Lagunas Norte Gold Mine and Pan American Silver’s La Arena Gold Mine. La Victoria consists of eight mining concessions and eight mining claims encompassing approximately 89 square kilometres. La Victoria has good infrastructure with access to road, water and electricity and is located at an altitude that ranges from 3,150 m to 4,400 m above sea level.

Neither the TSXV nor its Regulation Services Provider (as that term is defined in the policies of the TSXV) accepts responsibility for the adequacy or accuracy of this release.

Significant Diamond Drilling Results, Iska Iska as at May 26, 2021 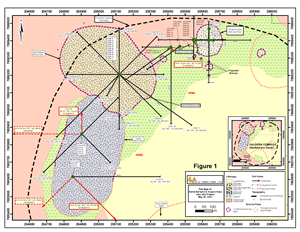 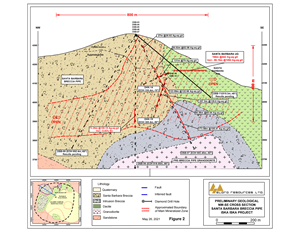