Use of this site indicates acceptance of the Privacy Policy and Terms of Use.
The information on this Website is not reliable and not intended to provide tax, legal, or investment advice. Nothing contained on the Website shall be considered a recommendation, solicitation, or offer to buy or sell a security to any person in any jurisdiction.
CEO.CA members discuss high-risk penny stocks which can lose their entire value. Only risk what you can afford to lose.
© 2022 - CEO.CA Technologies Ltd.
@nasdaq/fenixoro-discovers-multiple-gold-silver-veins-in-the ↻
0 online
Today This week
Search Subscribe
Members of @nasdaq/fenixoro-discovers-multiple-gold-silver-veins-in-the

by @nasdaq on 9 May 2022, 08:35
FenixOro Discovers Multiple Gold-Silver Veins in the Southern Zone and a New Style of High Grade Mineralization in the Central Area

TORONTO, May 09, 2022 (GLOBE NEWSWIRE) -- FenixOro Gold Corp (CSE:FENX, OTCQB:FDVXF, Frankfurt:8FD) is pleased to announce first drill results from the southern vein zone which confirm the discovery of multiple veins that significantly impact management’s expectations of the project’s global resource potential. Continued positive results from the Central Zone are also reported along with a newly discovered style of gold mineralization which is more typical of porphyry gold systems.

FenixOro VP Exploration Stuart Moller commented, “These results make clear that the resource potential at Abriaqui continues to expand in both the Central Zone and the important Southern Zone. Many of our high priority targets remain to be drilled in the south and the outlook for the growth of the project remains extremely promising.”

Partial results from early drilling in the southern zone indicate promising gold and silver grades. Similar to the first holes drilled in the northern block, many more veins were intersected than were known from surface and mine mapping. The area is 200-400m higher in elevation than the northern and central blocks and the general structural pattern of E-W and NW trending, sub-vertical veins is developed. Mine samples indicate a significantly higher silver to gold ratio than in the north (15:1 vs. 2:1) with higher copper values. The current drill program is limited to two small areas where there are clearings in the dense forest and numerous additional targets based on geophysics and soil sampling will require more preparation in upcoming phases of the program.

Figure 2 shows the four holes completed to date and Table 1 summarizes intercepts from the first three (017, 020, and 023). Each hole cut 7-10 veins, several of which had individual samples above 10 g/t gold. Silver values were higher as expected and there were several intervals with up to 20 g/t silver with little accompanying gold. Copper values have not yet been received. This first reconnaissance level drilling to date verifies the presence of potentially ore grade and thickness veins in the south and justifies the continuing effort to expand the permitted area for subsequent drilling.

Infill drilling in the central vein zone clearly shows that it is an extension of the northern zone with little offset across the Cascada Fault. Grades and thicknesses are similar in both areas and the strike extent of the main family of veins has been extended to one kilometer. New drill data presented in this release include 1.25m @ 23.55 g/t Au and 2.40m @ 5.69 g/t Au in hole 021 (Table 1). An additional 15.5m intercept at 1.46 g/t, though probably sub-economic at the current gold price, is a further example of a thick veinlet zone as seen on three different veins north of the fault (see press release of January 25, 2022). Hole 022 was a short hole designed to confirm the orientation of the Cascada fault.

An actinolite-albite veinlet several centimeters thick which assays 13 g/t has a halo of visible native gold (Figure 3). Similar veinlets are present in several porphyry gold systems in Colombia of similar age to Abriaqui (eg. AngloGold’s multi-million ounce La Colosa and Quebradonna) though in those deposits they are generally not associated with gold. No porphyry-style mineralization has yet been seen at Abriaqui though the coincidence of these veinlets with the northern margin of a pronounced magnetic anomaly is intriguing. The veins do not contain sulfides or quartz-calcite so they are not visually obvious. We are relogging all holes in the area and expanding sampling coverage to determine the 3d extent of the mineralization and its potential significance to a buried gold porphyry system.

Summary of Program To Date

A total of 11,663 meters have been drilled in 25 holes since 2020 and three main areas totaling well over 100 gold-bearing veins have been delineated. Most work has been done in the block north of the Cascada Fault where two prominent families of sub-vertical veins have been drilled on approximately 200 meter spacing along strike (Figure 1). No 43-101 compliant resources have been calculated but a minimum of 1.6 – 2.4 million ounces of resource potential have been delineated in the core area of the north block on only four veins (Press Releases of March 19 and September 28, 2021). Subsequent to these calculations, drilling in the north and central blocks has extended the main trend to 1000 meters in strike length and to depths up to 1000m below surface.

Figure 2. New drill results in the southern vein zone. Gold-silver results for bottom of hole 023 and all of 025 and all copper results pending.

Stuart Moller, Vice President Exploration and Director of the Company and a Qualified Person for the purposes of NI 43-101 (P.Geo, British Colombia), has prepared or supervised the preparation of the technical information contained in this press release. Mr. Moller has more than 40 years of experience in exploration for precious and other metals including ten in Colombia and is a Fellow of the Society of Economic Geologists.

Drill core sampling is done in accordance with industry standards. The HQ and NQ diameter core is sawed, and half core samples are submitted to the laboratory. The other half core along with laboratory coarse reject material and sample pulps are stored in secure facilities on site and/or in the sample prep lab. Following strict chain of custody protocols, the samples are driven to the ISO 17025:2017 certified ALS Laboratory sample preparation facility in Medellin and ALS ships the prepared pulps to their assay laboratory in Lima, Peru. As of November, 2021 similar procedures have been utilized by the ISO 9001:2015 certified Medellin branch of Ontario-based Actlabs. Blanks, duplicates, and certified reference standards totaling 15% of the total samples are inserted into the sample stream. To date, no material quality control issues have been detected. Gold is analyzed by fire assay with 50 gram charges for grades in excess of 10 grams per tonne and the additional elements are analyzed by atomic absorption and/or ICP with appropriate follow-up for over-limits.

Reported grade intervals are calculated using uncut gold values. Maximum sample length is one meter. Intervals which include multiple samples are calculated using the full geologic interval of mineralization at a 1 g/t gold external cutoff grade and are not subject to specific rules for cutoff grades within the zones. As such, quoted thickness and grade of these intervals do not necessarily represent optimized economic intervals in a potential future mine. Reported sample and interval widths in drill holes are based on lengths of individual samples in core and do not necessarily represent true widths of mineralization. True widths will sometimes be less than the quoted interval lengths. Intervals defined by channel samples represent true widths of mineralization in vertical veins.

There are currently no NI 43-101 compliant resources or reserves in the project area. The analysis of drill and channel results is intended to estimate the potential for future resources which will require significant additional drilling to define.

FenixOro Gold Corp is a Canadian company focused on acquiring and exploring gold projects with world class exploration potential in the most prolific gold producing regions of Colombia. FenixOro's flagship property, the Abriaqui project, is located 15 km west of Continental Gold's Buritica project in Antioquia State at the northern end of the Mid-Cauca gold belt, a geological trend which has seen multiple large gold discoveries in the past 10 years including Buritica and Anglo Gold's Nuevo Chaquiro and La Colosa. As documented in "NI 43-101 Technical Report on the Abriaqui project Antioquia State, Colombia" (December 5, 2019), the geological characteristics of Abriaqui and Buritica are similar. The report also documents the high gold grade at Abriaqui with samples taken from 20 of the veins assaying greater than 20 g/t gold Since the preparation of this report a Phase 1 drilling program has been completed at Abriaqui resulting in a significant discovery of a high grade, "Buritica style" gold deposit. A Phase 2 drilling program has recently commenced.

FenixOro's VP of Exploration, Stuart Moller, led the discovery team at Buritica for Continental Gold in 2007-2011. At the time of its latest public report, the Buritica Mine contains measured plus indicated resources of 5.32 million ounces of gold (16.02 Mt grading 10.32 g/t) plus a 6.02 million ounce inferred resource (21.87 Mt grading 8.56 g/t) for a total of 11.34 million ounces of gold resources. Buritica began formal production in November 2020 and has expected annual average production of 250,000 ounces at an all-in sustaining cost of approximately US$600 per ounce. Resources, cost and production data are taken from Continental Gold's "NI 43-101 Buritica Mineral Resource 2019-01, Antioquia, Colombia" (18 March, 2019). Continental Gold was recently the subject of a takeover by Zijin Mining in an all-cash transaction valued at C$1.4 billion. 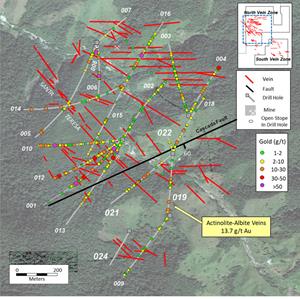 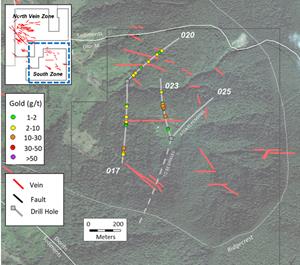 New drill results in the southern vein zone. Gold-silver results for bottom of hole 023 and all of 025 and all copper results pending. 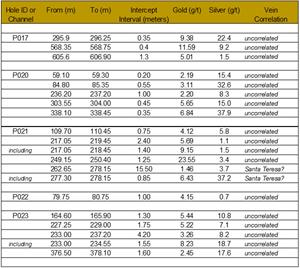 Selected new drill intervals in holes described in the text.