Use of this site indicates acceptance of the Privacy Policy and Terms of Use.
The information on this Website is not reliable and not intended to provide tax, legal, or investment advice. Nothing contained on the Website shall be considered a recommendation, solicitation, or offer to buy or sell a security to any person in any jurisdiction.
CEO.CA members discuss high-risk penny stocks which can lose their entire value. Only risk what you can afford to lose.
© 2016 - Pacific Website Company Inc.
@nasdaq/fireweed-exploration-update-seven-core-drill-holes ↻
0 online
Today This week
Search Subscribe
Members of @nasdaq/fireweed-exploration-update-seven-core-drill-holes

Drilling
Drilling started at the Tom North target to test a 600m long potential extension north of the large Tom West mineral resource (see Figure 2). The Tom North target is based on re-interpretation of historic drilling and trenching results as well as Fireweed mapping in 2018. Three holes were initially planned but the program has been expanded to seven holes with five holes now completed. Some holes are step-outs from historic drilling and others are short twins of historical holes to test the reproducibility of 1950s drill results. Fireweed drilling elsewhere at Tom demonstrated that many early historic drill results under-reported grades due to poor core recoveries (see examples in 2017 and 2018 Fireweed drilling news releases).  Positive drill results at Tom North have the potential to extend open pit and underground mine life, and improve Tom economics described in the current Preliminary Economic Assessment (PEA) (see Fireweed news release dated May 23, 2018).

A step-out hole at Tom West has been completed to extend the high-grade feeder mineralization to the south.

After drilling the remaining two planned Tom North holes, the core drill will move to test Target R, where coincident strong gravity-magnetic highs and a soil anomaly were detected near the camp access road north of the Tom deposits. The drill will then move on to other targets identified last year (see Map 1). See Fireweed news release dated May 21, 2019 for full details of the 2019 exploration plans.

Samples from the first two core holes have been processed and shipped to the laboratory; additional samples will be shipped this week. Drill results will be published as assays are received and interpreted.

The reverse circulation (RC) drill program completed 17 holes on 6 different targets mainly within the Fertile Corridor. The RC program was designed to test overburden depth to support the passive seismic and gravity programs as well as to sample the deeper overburden and the top of bedrock to test for potentially anomalous C-horizon soil and potentially mineralized bedrock. Although difficult drilling conditions and terrane slowed the program, every hole reached bedrock and generated representative five-foot samples that have been submitted to the laboratory for analyses. A preliminary handheld pXRF analysis on each sample was also carried out on site to guide further exploration including core drilling.

Field Exploration
Gravity geophysical crews arrived on site June 24 and have been surveying along the Fertile Corridor west from the 2018 gravity survey grid that successfully defined several drill targets that will be drill tested this summer (see Map 1).

Geological field work began at David and Target G in the northwest of the property (see Map 1) to finalize plans for drilling of zinc-lead-silver mineralization found there by Fireweed crews in 2018. Geological crews are also working at Target S and will continue working west along the Fertile Corridor in the coming weeks.

Technical information in this news release has been reviewed and approved by Gilles Dessureau, P.Geo, Vice President, Exploration and a ‘Qualified Person’ as defined under Canadian National Instrument 43‑101.

Stock Option Grants
The Company announces that, pursuant to its stock option plan, it has granted a total of 250,000 stock options exercisable above market at a price of $0.65 per share for a five-year term. All these options are being granted to employees and consultants. Directors and senior officers chose not to be granted any additional stock options at this time.

About Fireweed Zinc Ltd. (TSXV: FWZ): Fireweed Zinc is a public mineral exploration company focused on zinc and managed by a veteran team of mining industry professionals. The Company is advancing its district-scale 544 km2 Macmillan Pass Project in Yukon, Canada, which is host to the 100% owned Tom and Jason zinc-lead-silver deposits with current Mineral Resources and a PEA economic study (see Fireweed news releases dated January 10, 2018, and May 23, 2018, respectively, and reports filed on www.sedar.com for details) as well as the Boundary Zone and End Zone which have significant zinc-lead-silver mineralization drilled but not yet classified as mineral resources. The project also includes option agreements on large blocks of adjacent claims (MAC, MC, MP, Jerry, BR and NS) which cover exploration targets in the district where previous and recent work identified zinc, lead and silver prospects, and geophysical and geochemical anomalies in prospective host geology.

Additional information about Fireweed Zinc and its Macmillan Pass Zinc Project can be found on the Company’s website at www.FireweedZinc.com and at www.sedar.com.

Cautionary Statements
This news release may contain “forward-looking” statements and information relating to the Company and the Macmillan Pass Project that are based on the beliefs of Company management, as well as assumptions made by and information currently available to Company management. Such statements reflect the current risks, uncertainties and assumptions related to certain factors including but not limited to, without limitations, exploration and development risks, expenditure and financing requirements, general economic conditions, changes in financial markets, the ability to properly and efficiently staff the Company’s operations, the sufficiency of working capital and funding for continued operations, title matters, First Nations relations, operating hazards, political and economic factors, competitive factors, metal prices, relationships with vendors and strategic partners, governmental regulations and oversight, permitting, seasonality and weather, technological change, industry practices, and one-time events. Additional risks are set out in the Company’s prospectus dated May 9, 2017, and filed under the Company’s profile on SEDAR at www.sedar.com.  Should any one or more risks or uncertainties materialize or change, or should any underlying assumptions prove incorrect, actual results and forward-looking statements may vary materially from those described herein. The Company does not undertake to update forward‐looking statements or forward‐looking information, except as required by law.

Photos accompanying this announcement are available at:
https://www.globenewswire.com/NewsRoom/AttachmentNg/3a0e8cca-2d5a-433d-8cc5-ff58de19cfe6 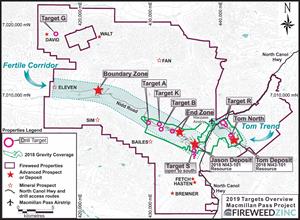 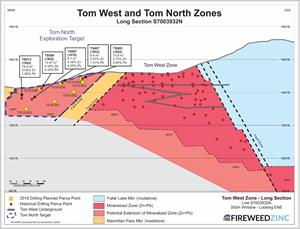