Use of this site indicates acceptance of the Privacy Policy and Terms of Use.
The information on this Website is not reliable and not intended to provide tax, legal, or investment advice. Nothing contained on the Website shall be considered a recommendation, solicitation, or offer to buy or sell a security to any person in any jurisdiction.
CEO.CA members discuss high-risk penny stocks which can lose their entire value. Only risk what you can afford to lose.
© 2022 - CEO.CA Technologies Ltd.
@nasdaq/geophysical-surveys-to-commence-on-battery-metals-targets ↻
0 online
Today This week
Search Subscribe
Members of @nasdaq/geophysical-surveys-to-commence-on-battery-metals-targets

by @nasdaq on 6 May 2022, 08:57
Geophysical Surveys to Commence on Battery Metals Targets in the Karratha District of Western Australia

VANCOUVER, British Columbia, May 06, 2022 (GLOBE NEWSWIRE) -- Novo Resources Corp. (“Novo” or the “Company”) (TSX: NVO, NVO.WT & NVO.WT.A) (OTCQX: NSRPF) has commenced advanced geophysical exploration for battery metals and gold at the Karratha Project in the West Pilbara Region of Western Australia. Geophysical exploration is designed to follow-up on multiple airborne electromagnetic (“VTEM”) anomalies (previously defined in 2007 by Legend Mining Limited (“Legend”))1 which have not been drill tested, along with soil geochemical anomalies (including Cu, Ni and Co) associated with the VTEM conductors, including Novo’s Southcourt and Milburn prospects.

FLEM, scheduled to commence later in May 2022, will target airborne VTEM anomalies on Novo’s Purdy’s Reward North tenement in the fertile Andover mafic-ultramafic intrusion, adjacent to Azure’s Andover Ni-Cu-Co massive sulphide discovery. The FLEM surveys will be capable of delineating massive to sub-massive sulphides to depths of greater than 300 m to provide targets for diamond drilling planned to commence in Q2/Q3 2022. Historical exploration review, and recent mapping of five previously defined FLEM targets, have advanced these targets to drill ready, awaiting heritage clearance.

The five targets previously defined by moving loop EM (“MLEM”) and fixed loop EM include the Milburn target in the Andover intrusion area, and the Bushmill, Roundstone, Banagher and Wexford targets in the Dingo/Bullock Hide and Maitland intrusions, adjacent to the Radio Hill Ni-Cu-Co Mine. All EM targets are associated with fertile ultramafic and mafic intrusive rocks.

Dr. Quinton Hennigh (P.Geo.) is the qualified person, as defined under National Instrument 43-101 Standards of Disclosure for Mineral Projects, responsible for, and having reviewed and approved, the technical information contained in this news release. Dr. Hennigh is the non-executive co-chairman and a director of Novo.

Novo operates its flagship Beatons Creek gold project while exploring and developing its prospective land package covering approximately 12,500 square kilometres in the Pilbara region of Western Australia. In addition to the Company’s primary focus, Novo seeks to leverage its internal geological expertise to deliver value-accretive opportunities to its shareholders. For more information, please contact Leo Karabelas at (416) 543-3120 or e-mail leo@novoresources.com. 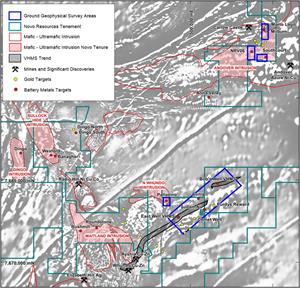