Use of this site indicates acceptance of the Privacy Policy and Terms of Use.
The information on this Website is not reliable and not intended to provide tax, legal, or investment advice. Nothing contained on the Website shall be considered a recommendation, solicitation, or offer to buy or sell a security to any person in any jurisdiction.
CEO.CA members discuss high-risk penny stocks which can lose their entire value. Only risk what you can afford to lose.
© 2016 - Pacific Website Company Inc.
@nasdaq/gt-gold-drills-12400-metres-of-111-gt-au-068 ↻
0 online
Today This week
Search Subscribe
Members of @nasdaq/gt-gold-drills-12400-metres-of-111-gt-au-068

VANCOUVER, British Columbia, Dec. 19, 2019 (GLOBE NEWSWIRE) -- GT Gold (TSX-V:GTT) (the “Company” or “GT Gold”) is pleased to announce results from the last six drill holes from its 15,000-metre Phase 2 exploration program at its 100% owned Saddle North Cu-Au porphyry system in northwest B.C. All 2019 drill holes have now been reported from Saddle North, and final assays for the four drill holes from Saddle South are pending release expected early in the new year.

Drill holes TTD141, TTD142, TTD143 and TTD144 were southeasterly inclined drill holes drilled at high angles to previously drilled holes at Saddle North (Figure 1). The aim of these drill holes was to more fully demonstrate continuity and consistency of Cu-Au mineralization at Saddle North in support of ongoing geologic and resource modelling. All four holes filled substantial gaps in the geologic model, will help to test and confirm our geologic interpretation, and will contribute to future resource modelling.

The results from these holes confirm the interpretation that the core zone at Saddle North comprises a steeply south-southwesterly- to west-southwesterly plunging, northerly-elongate body of higher-grade mineralization with down-plunge, strike and width dimensions of 1,200 - 1,600 metres, 200 - 400 metres and 40 - 450 metres, respectively. The core zone expands to depth, where it remains open, displays excellent continuity from hole-to-hole and section-to-section, and carries consistent Cu-Au grades down hole. In addition, highly prospective targets remain untested along strike to the west and east at Saddle North.

Intervals are calculated using a 0.4 g/t AuEq cut-off, a maximum of ten metres of internal dilution for porphyry-style mineralization and no top cut is applied. All intervals are reported as drill widths and are expected between 50% and 85% of true width. Prices used to calculate CuEq and AuEq are, Au: $1,300.00/oz, Ag: $16.00/oz, Cu: $2.60/lb. All values are reported in USD and do not consider metal recoveries.

Drill holes TTD141, TTD142, TTD143 and TTD144 (Figures 1, 2 and 3) were southeasterly inclined holes drilled across the general trends of holes drilled previously at Saddle North. As mentioned above, they demonstrate continuity and consistency of Cu-Au mineralization at Saddle North and all four drill holes fill substantial gaps in data that will be critical to building geologic and resource models.

Drill hole TTD141 is a steeply inclined (-75°) hole collared near the westernmost side of the Saddle North system (Figure 1).  It tested the deeper parts of the higher-grade core in the general area tested previously by drill holes TTD128 and TTD130, and down-dip of drill hole TTD109 (Figure 3). In the vicinity of the higher-grade core at these depths, TTD141 ranges in approximate distance from drill holes TTD130 and TTD128, between 50 to 180m, and 65 and 90m, respectively, and therefore fills a significant gap in the geologic model  in this area. The broad high-grade intercepts in TTD141 helps to show that the higher-grade core in that area has continuity as well as grade, in spite of the presence of somewhat more weakly mineralized intermineral intrusive phases.

Drill holes TTD142, TTD143 and TTD144 essentially form a fence of holes on Section A (Figures 1 and 3), and together they fill in a number of large spaces in the geologic and resource space.

Like drill hole TTD141, TTD142 is a steeply inclined (-75 degrees) hole collared near the northwestern margin of Saddle North (Figures 1 and 2).  It tested the Saddle North mineralizing system at moderate depths, and while it appears in cross-section (e.g., Figure 2) to be relatively close to drill holes such as TTD093, it is no closer than approximately 110m in the better mineralized parts, and never closer than 100m overall. As with drill hole TTD141, TTD142 intersected a number less well-mineralized intermineral intrusive phases toward the bottom of the drill hole. Between these phases, drill hole TTD142 intersected mineralization with very good grades (Table 1), as did the closest drill holes, such as TTD134 (as close as approximately 50m at 1,050m) and TTD127 (a significant, and approximate 250m or more between the better grade parts of these holes).  It is notable that the very good grades in drill hole TTD142 also lie approximately 180m from the similarly high grade material intersected to the north, near the bottom of drill hole TTD102, thus highlighting this area for potential expansion of the higher grade parts of the Saddle North mineralized system.

Drill hole TTD143 is the central drill hole of the fence of newly-released holes shown on Section A (Figure 2).  It is moderately inclined (-56°) at its collar and targeted a broad gap in downhole data in the vicinity of drill holes TTD085, TTD090 and TTD112.   At its closest, near the upper part of the higher-grade core at Saddle North, drill hole TTD143 is relatively close to the broad high-grade intercept in drill hole TTD112 (approximately 45m, within the 1.00% CuEq contour in Figure 2), but the holes trend away from one another, and near the bases of their respective higher-grade intercepts, they are at least 180m apart.  This helps to illustrate that drill holes such as TTD143 serve to fill very significant gaps in data and that they appear to demonstrate continuity of excellent grade across broad widths, as one might expect from the excellent downhole continuity in grades in many of these drill holes.

Drill hole TTD144 was the shallowest drill hole drilled on the fence of newly-released holes shown Figure 2 (Section A).  It targeted the zone at moderate depths at Saddle North in which the intercepts in drill holes such as TTD090, TTD106, TTD110, and TTD117 suggest that there is a weakening in grade between the better grade zone intersected in shallower holes such as TTD108, TTD111, TTD113 and TTD125, and the higher-grade core described above. As with the previous drill holes penetrating this area, the intercepts reported for drill hole TTD144 returned moderate grades.

Drill hole TTD138:  No significant intersections.  Despite a lack of significant intersections, drill hole TTD138, collared approximately 1 km to the southeast of Saddle North, established that the geophysical anomalies in that area, coincident Induced Polarization chargeability and magnetic highs, correspond in large part with intrusive rocks that include an early, strongly quartz-sericite-pyrite altered phase, or phases, cut by a late and much less altered dioritic intrusion containing abundant primary magnetite.  Samples from these phases have been collected for age-dating and whole rock geochemistry with the aim of reconstructing the geologic history and better understanding the exploration potential of the significantly mineralized and altered Saddle North system. This should aid us in vectoring toward more prospective targets.

“Similar to our last release, these results continue to highlight the strength of the Saddle North system, both at depth and near surface,” commented CEO Paul Harbidge. Mr. Harbidge further stated that: “Now that this year’s drilling is complete, we continue to make excellent progress with detailed re-logging of core and assimilation of the full range of empirical and geochemical data collected during the field season, with the aim of construction of a fully-constrained geological model. The model will then form the foundation for our initial NI 43-101-compliant resource, which is anticipated to be released in Q2. Furthermore, in 2020 our team will be focused on reaching our larger goal of delivering a preliminary economic assessment to our stakeholders by year-end”.

A total of 25,146 metres were drilled in the combined Phase 1 and 2 programs on the Tatogga Property. All 41 drill holes for 23,857 metres of drilling have now been reported for Saddle North. Final assays for the four drill holes from Saddle South, for a total of 1,289 metres, have also been received. They are being compiled and interpreted in light of the previous drilling and will be reported on in early to mid January, 2020.

As previously mentioned, the four Saddle South drill holes were drilled in order to obtain structural data of veins in the west-central part of the Saddle South system, as none of the 2017 drill core was oriented. The primary rationale for collecting this data was to better understand the controls on mineralization, with a secondary goal of collecting a representative metallurgical sample along the west-northwest striking and westerly plunging system, which reaches surface in this area on the broad and gently-sloping top of Saddle ridge. In order to maximize the amount of data collected with a minimum number of drill holes, the holes were drilled to the northwest and to the southwest at moderate inclinations, along and across the system.

GT Gold has initiated a comprehensive re-log of all the Saddle North core, which is in storage in southern B.C. The re-log is part of a thorough program designed to include study work that will ultimately progress both Saddle North and Saddle South through resource estimation and economic evaluation, with an initial goal of completing a  geological model for Saddle North by the end of the first quarter of 2020. Furthermore, a dedicated exploration team is now integrating various datasets for the Saddle North area, for Quash-Pass, and for the greater property area to define drill targets for the 2020 field program.

GT Gold’s Tatogga Project lies in the northern part of northwest B.C.’s prolific Golden Triangle, with active mines such as Red Chris and Brucejack, past producers such as Eskay Creek, Silbak-Premier, Snip, Anyox, and Granduc, and large-scale unexploited deposits such as KSM-Iron Cap, Snowfield and Red Mountain. The property features district-scale exploration potential, with two recent discoveries, Saddle North and Saddle South, along with a third target, Quash Pass, which is close to being drill-ready. All are proximal to Highway 37 and to grid power that leads to the nearby Red Chris copper-gold mine, approximately 20 km to the southeast.

GT Gold has implemented a rigorous quality assurance / quality control (QA/QC) program to ensure best practices in sampling and analysis of diamond drill core, the details of which can be viewed on the Company's website at http://www.gtgoldcorp.ca/projects/tatogga/. All assays are performed by ALS Canada Ltd., with sample preparation carried out at the ALS facility in Terrace, BC, and assays at the North Vancouver laboratory. For gold, fire assays are performed as per ALS method Au-AA26 (0.01- 100 g/t Au) using 50 grams of sample measured by atomic absorption. Assays equal to or greater than 100 g/t Au are reanalyzed gravimetrically by method Au-GRA22. Silver and copper are analyzed by ALS method ME-MS61 with a 4-acid digestion followed by ICP-MS analysis. Assays greater than 100 ppm silver or 1% copper are reanalyzed by ICP-AES by method OG-62.

*Intervals are calculated using a 0.4 g/t AuEq, a maximum of ten metres of internal dilution for porphyry-style mineralization and no top cut is applied. All intervals are reported as drill widths and are expected between 50% and 85% of true width.
**Prices used to calculate CuEq and AuEq are, Au: $1,300.00/oz, Ag: $16.00/oz, Cu: $2.60/lb. All values are reported in USD and do not consider metal recoveries. 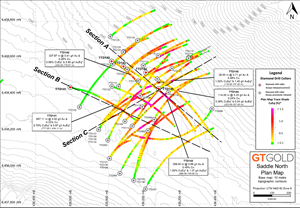 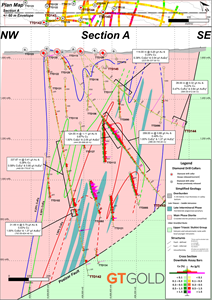 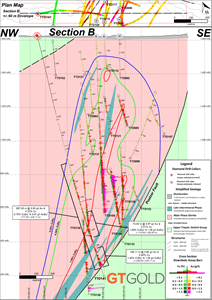 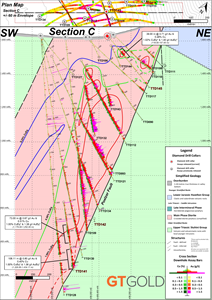