Use of this site indicates acceptance of the Privacy Policy and Terms of Use.
The information on this Website is not reliable and not intended to provide tax, legal, or investment advice. Nothing contained on the Website shall be considered a recommendation, solicitation, or offer to buy or sell a security to any person in any jurisdiction.
CEO.CA members discuss high-risk penny stocks which can lose their entire value. Only risk what you can afford to lose.
© 2016 - Pacific Website Company Inc.
@nasdaq/hemlo-explorers-receives-exploration-permits-and-prepares ↻
0 online
Today This week
Search Subscribe
Members of @nasdaq/hemlo-explorers-receives-exploration-permits-and-prepares

TORONTO, Dec. 17, 2020 (GLOBE NEWSWIRE) -- Hemlo Explorers Inc. (the “Company”) (TSXV: HMLO) is pleased to announce that the Company has received its exploration permits which cover the majority of claims on the North Limb Project and all of the claims on the Pic Project from the Ontario Ministry of Energy, Northern Development and Mines (“ENDM”). The Company would like to recognize the Biigtigong Nishnaabeg and the Netmizaaggamig Nishnaabeg First Nations for their cooperation and input into the permitting process.

Management intends to begin its exploration program on the North Limb in January from its newly constructed core logging facility in Manitouwadge, while continuing to develop the geologic models for the Hemlo West and Pic projects to prepare for additional exploration.

Mr. Brian Howlett, CEO of the Company commented, “We are very fortunate to be working in the Hemlo camp and consider our package of about 38,000 hectares of claims to contain some of the most prospective geology in the area. We are fully funded to compete the planned drilling campaign and look forward to getting started next month.”

Management has proposed drill testing for specific targets on the North Limb Property that will include testing numerous sections of the 8.2-kilometre-long Armand Volcanic Complex (“Armand Complex”) trend, based on several anomalies outlined by drill intercepts, soil and rock assays and geophysical signatures. The Company believes that the Armand Complex resembles the geological setting of the Moose Lake Volcanic Complex at the prolific Hemlo Mine Complex that has produced over 21 million ounces since it began production in 1985 is expected to be in operation until at least 2030 (as reported by Barrick Gold Corporation).

A minimum initial 10,000 metre drill program has been designed to test targets along the Armand Complex trend and along adjacent fault/shear trends.

A photo accompanying this announcement is available at https://www.globenewswire.com/NewsRoom/AttachmentNg/8eb1f585-97c7-40fe-a5fd-8e5e1ac070a8

The Company acquired the Hemlo West Project in May 2020 as part of a transaction with O3 Mining Inc., which is one of its major shareholders. Hemlo West is a 6,000-hectare project consisting of two converging deformation zones with anomalous occurrences of gold and barite, as well as other elements that are signature to the Hemlo Mine Complex. The project contains 7.5 kilometres of the Heron Bay/Hemlo Deformation Zone, that is believed to be critical to the formation of the original Hemlo Deposit. Detailed review of historic exploration work is underway to identify favourable zones for drill testing.

The Company has begun the consultation process with the local First Nations for the purpose of applying for an exploration permit for the Hemlo West project.

In early 2020, an airborne detailed magnetic survey and ground geochem prospecting surveys were undertaken over select areas of the 24,000-hectare Pic Project to better define known gold anomalous areas at Beggs and Porphyry Lakes. At Wire Lake, a 3D model was developed, and a review undertaken to ascertain the growth potential along its 2.7-kilometre intrusion-related gold shear trend. The review highlighted two parallel structural zones that have seen limited exploration work with plunge/down dip potential below existing shallow drill intercepts of the Wire Lake trend.

On December 16, 2020, a Notice of Caution by the Ontario Government was placed on lands in the northern Lake Superior watershed where one or more First Nations have asserted Aboriginal rights and title. This caution does not affect pre-existing mining claims and management is confident that continued collaboration with communities and exploration activities will be unaffected.

Dan McCormack, P.Geo., Exploration Manager for the Company, is the “Qualified Person” as defined by National Instrument 43-101 Standards of Disclosure for Mineral Projects, responsible for the accuracy of technical information contained in this news release.

Hemlo Explorers is a Canadian-based mineral exploration company with a portfolio of properties in Ontario and Nunavut. We are focused on generating shareholder value through the advancement of our main Hemlo area projects, including the North Limb, Hemlo West and the Pic Project.

Certain information set forth in this news release may contain forward-looking statements that involve substantial known and unknown risks and uncertainties, including, but not limited to, exploration results, potential mineralization, statements relating to mineral resources, and the Company’s plans with respect to the exploration and development of its properties. These forward-looking statements are subject to numerous risks and uncertainties, certain of which are beyond the control of Hemlo Explorers Inc., including, but not limited to, the impact of general economic conditions, industry conditions, volatility of commodity prices, risks associated with the uncertainty of exploration results and estimates, currency fluctuations, dependency upon regulatory approvals, the uncertainty of obtaining additional financing, exploration risk and Covid-19 pandemic related orders. Readers are cautioned that the assumptions used in the preparation of such information, although considered reasonable at the time of preparation, may prove to be imprecise and, as such, undue reliance should not be placed on forward-looking statements. 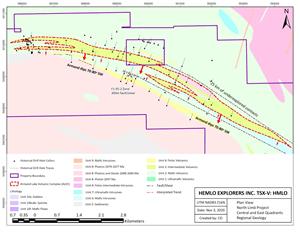