Use of this site indicates acceptance of the Privacy Policy and Terms of Use.
The information on this Website is not reliable and not intended to provide tax, legal, or investment advice. Nothing contained on the Website shall be considered a recommendation, solicitation, or offer to buy or sell a security to any person in any jurisdiction.
CEO.CA members discuss high-risk penny stocks which can lose their entire value. Only risk what you can afford to lose.
© 2021 - CEO.CA Technologies Ltd.
@nasdaq/initial-results-of-saddle-north-phase-one-drilling ↻
0 online
Today This week
Search Subscribe
Members of @nasdaq/initial-results-of-saddle-north-phase-one-drilling

VANCOUVER, British Columbia, July 17, 2019 (GLOBE NEWSWIRE) -- GT Gold (TSX-V:GTT) (the “Company” or “GT Gold”) is pleased to announce results from the first six drill holes of its 10,000-metre Phase 1 exploration program, the aim of which is to expand the high-grade Saddle North Cu-Au porphyry discovery at its 100%-owned Tatogga Project. The first six holes of the Phase 1 program have confirmed that the high grades identified in hole TTD108 continue up-dip to surface at Saddle North, and holes TTD116 and 112 show that a direct link of excellent and increasing grades exists between the near-surface mineralization through moderate depths to the deeper and generally highest grade mineralization at Saddle North.

Prices used to calculate CuEq and AuEq are: Cu: $2.57/lb, Au: $1,294.80/oz, Ag: $15.65/oz. All values are reported in USD and do not consider metal recoveries
Metres refers to Drilled core lengths and represent approximately 65 to 85% of the true thickness of the mineralized zone

“This season’s drilling has started off very successfully,” remarked GT Gold’s Vice President of Exploration, Charles Greig. “We have shown that high-grade Cu-Au mineralization occurs closer to surface than was previously known and have linked these zones with the deep and very high-grade Cu-Au mineralization intersected last year in holes TTD093 and 109 with intersections in holes TTD112 and 116. Our phase one program continues to bring into clearer focus the potentially significant economics of our Saddle North discovery”

Other exploration activities are also well underway. A property-wide airborne Magnetotelluric (MT) survey was recently completed, and further prospecting, soil and stream sediment sampling is ongoing at the Quash-Pass target, approximately 7km southwest of Saddle (see ‘Quash-Pass’ description below). The data collected in the MT survey is being compiled and modelled along with previously collected geophysical data, and any anomalies identified will be targeted with additional fieldwork.

Once the 10,000 metres of drilling of Phase 1 is complete, Saddle North targets will be re-prioritized and drilling will focus on producing a preliminary resource for Saddle North. A number of additional targets peripheral to Saddle North will also be drilled. Any other new targets showing significant promise may also be tested in an anticipated Phase 2 drill program, scheduled to begin in early August.

GT Gold’s Tatogga Project lies in the northern part of northwest B.C.’s prolific Golden Triangle. The property features district scale exploration potential, with two recent discoveries, Saddle North and Saddle South, along with a third target, Quash-Pass, which is close to being drill-ready. All are proximal to both Highway 37 and to grid power that leads to the nearby Red Chris copper-gold mine, located approximately 20km to the southeast. GT Gold is well funded, with a current cash position of approximately C$19 million.

Initial drilling at Saddle North followed indications from early rock and soil geochemical sampling, geology, and geophysical work which outlined a kilometre-scale geochemical, magnetic and Induced Polarization (IP) chargeability anomaly coincident with local exposure of quartz-sericite-pyrite altered rocks. Reconnaissance holes TTD062 and 064, completed late in the 2017 drilling season, indicated the presence of a copper-gold porphyry system that bore some similarities to the nearby Red Chris copper-gold mine. The results from the 2018 program demonstrated the potential for a significant copper-gold porphyry system at Saddle North, with grades exceeding 1.0% CuEq and 1.5 g/t AuEq in a higher-grade core zone (see news January 9, 2019). It also showed that this core zone reached from near surface (hole TTD108) to greater than 1,300 metres down-dip, where it remains open. True width of the core zone is approximately 100 metres in hole TTD108, at a depth of 200m. Copper equivalent grade appears to increase somewhat with depth, and in mineralized thickness increases to greater than 300 metres in holes TTD093 and TTD109. The 2018 results also demonstrated that the high-grade core zone extends along strike at least 500 metres (to hole TTD102) and that it lies within a much broader, strongly mineralized envelope with a drilled strike length in excess of 650 metres, a true thickness of approximately 700 metres, and a down-dip extent of more than 1,300 metres. The 2019 drilling suggests that the high-grade core zone also extends to surface to the northwest along trend of TTD108. This large, high-grade copper-gold mineralized zone generally appears to trend northwest-southeast and to dip steeply to the west-southwest, while the central higher-grade core zone may plunge similarly west-southwest.

The 2017 exploration program, testing a gold-in-soil anomaly with the first-ever drilling in the Saddle area, resulted in the discovery of the epithermal gold system at Saddle South. It is hosted by hydrothermally altered volcanic fragmental and volcaniclastic rocks of the Upper Triassic Stuhini Group that are cut by dikes primarily of latest Triassic and Early Jurassic age. Drilling defined a well-mineralized east-west trend of gold bearing sulphide-rich veins spanning roughly 400 metres along strike that is up to 150 metres across and is coincident with a moderate IP chargeability high and resistivity low. The 2017 drilling returned many high-grade intercepts (e.g., 51.53 g/t over 6.95 metres in TTD007; 20.02 g/t Au over 8.25 metres in TTD046), and the aim of the 2018 program at Saddle South was to further test the system along strike and to depth.

Drilling in the 2018 season at Saddle South expanded both the depth extent and the strike length of the mineralizing system. Deep intercepts on the west (e.g., TTD079), and on the east (e.g., TTD069), increased the size of the mineralized zone and expanded the exploration footprint. On the west margin of Saddle Ridge, and in all holes drilled west of the ridge and beneath the rock glacier in that direction, mineralized veins generally trend north-northeast (average strike 200) and dip moderately west-northwest (average 55°). Veins oriented in this direction correspond with a more southerly trend of the system, toward an area across the rock glacier where 2018 soil and talus fines sampling yielded highly encouraging results for gold (see news, September 4, 2018; figure 6). Also encouraging was the fact that drill holes collared from the rock glacier encountered less overburden than was expected (typically less than 30 metres), suggesting that the potential to the southwest may be readily tested.

At the Quash-Pass area, located approximately 7 km southwest of Saddle, a 6 km long east-southeast trending belt of highly anomalous gold- and silver-in-soil geochemistry bears similarities to the Saddle South system. The trend is marked by the presence of highly anomalous Saddle South-style “pathfinder” elements in soils, such as zinc, copper, antimony, and bismuth. Preliminary IP surveying indicated that elevated chargeabilities are coincident with the anomalous geochemistry.

GT Gold has implemented a rigorous quality assurance / quality control (QA/QC) program to ensure best practices in sampling and analysis of diamond drill core, the details of which can be viewed on the Company's website at http://www.gtgoldcorp.ca/projects/tatogga/. All assays are performed by ALS Canada Ltd., with sample preparation carried out at the ALS facility in Terrace, BC, and assays at the North Vancouver laboratory. Assay values are uncut. For gold, fire assays are performed as per ALS method Au-AA26 (0.01- 100.00 g/t Au) using 50 grams of sample measured by atomic absorption (AA). Assays equal to or greater than 100 g/t Au are reanalyzed gravimetrically by method Au-GRA22. Silver and copper are analyzed by ALS method ME-MS61 with a 4-acid digestion followed by ICP-MS analysis. Assays greater than 100ppm silver or 1% copper are reanalyzed by ICP-AES by method OG-62.

GT Gold Corp. is focused on exploring for base and precious metals in the geologically fertile terrain of British Columbia’s renowned Golden Triangle. The Company’s flagship asset is the wholly-owned, 46,827 hectare Tatogga property, located near Iskut, BC, upon which it achieved two significant discoveries in 2017 and 2018 at its Saddle prospect: a near surface bulk-tonnage and potential deep high-grade underground-style epithermal gold-silver vein system at Saddle South and, close by at Saddle North, a large-scale, richly mineralized porphyry gold-copper-silver intrusion.

Two photos accompanying this announcement are available at: 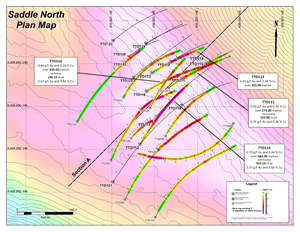 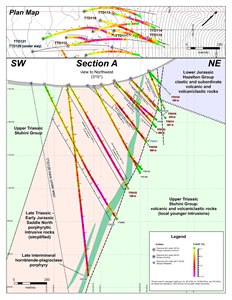