Use of this site indicates acceptance of the Privacy Policy and Terms of Use.
The information on this Website is not reliable and not intended to provide tax, legal, or investment advice. Nothing contained on the Website shall be considered a recommendation, solicitation, or offer to buy or sell a security to any person in any jurisdiction.
CEO.CA members discuss high-risk penny stocks which can lose their entire value. Only risk what you can afford to lose.
© 2016 - Pacific Website Company Inc.
@nasdaq/irving-resources-encounters-high-grade-veins-at-omu ↻
0 online
Today This week
Search Subscribe
Members of @nasdaq/irving-resources-encounters-high-grade-veins-at-omu

“Phase One drilling at Omu Sinter has yielded highly encouraging results,” commented Dr. Quinton Hennigh, director and technical advisor to Irving. “Expected “hit” rates when drilling epithermal veins is often 50% or less. We managed to intersect significant vein mineralization in seven of eight holes. Given these holes are widely spaced and that we appear to be above the prospective boiling level, Omu Sinter displays excellent potential for hosting a sizeable vein network. Well-defined targets generated by CSAMT will help guide Phase Two drill targeting slated to begin in January 2020.”

“At Omui Mine, our first holes at Honpi reveal multiple promising vein intercepts including one displaying ginguro and electrum in hole 19OMI-006,” continued Dr. Hennigh. “Current drill holes are testing some notable deep-rooted CSAMT anomalies at levels closer to the anticipated boiling horizon at around 350 m below surface. CSAMT results from Hokuryu display a robust system there. We have a long list of drill targets across the Omu region.”

Quinton Hennigh (Ph.D., P.Geo.) is the qualified person pursuant to National Instrument 43-101 responsible for, and having reviewed and approved, the technical information contained in this news release. Dr. Hennigh is a technical advisor and director of Irving Resources Inc.

Irving is a junior exploration company with a focus on gold in Japan. Irving also holds, through a subsidiary, a Project Venture Agreement with Japan Oil, Gas and Metals National Corporation (JOGMEC) for joint regional exploration programs in Republic of Malawi. JOGMEC is a government organization established under the law of Japan, administrated by the Ministry of Economy, Trade and Industry of Japan, and is responsible for stable supply of various resources to Japan through the discovery of sizable economic deposits of base, precious and rare metals.

Additional information can be found on the Company’s website:  www.IRVresources.com.

Forward-looking information
Some statements in this news release may contain forward-looking information within the meaning of Canadian securities legislation including, without limitation, statements as to planned exploration activities. Forward-looking statements address future events and conditions and, as such, involve known and unknown risks, uncertainties and other factors which may cause the actual results, performance or achievements to be materially different from any future results, performance or achievements expressed or implied by the statements. Such factors include, without limitation, customary risks of the mineral resource exploration industry, the availability to Irving of sufficient cash to fund any planned drilling and other exploration activities, as well as the performance of services by third parties.

THE CSE HAS NOT REVIEWED AND DOES NOT ACCEPT RESPONSIBILITY FOR THE ACCURACY OR ADEQUACY OF THIS RELEASE. 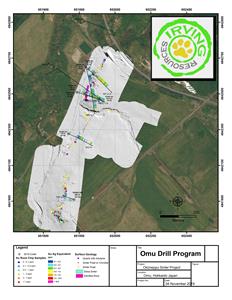 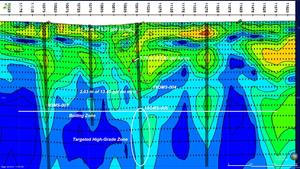 Cross section looking north. Holes 19OMS-004 and 19OMS-005 can be seen against a backdrop of CSAMT resistivity. Blue areas highlight least resistive rocks whereas greens, yellow, orange and red are increasingly resistive areas. Irving interprets resistive areas as a proxy for areas of silicification generated by hydrothermal processes during time of formation. Interpreted silicified structures, veins, are highlighted in gray. Note that the high-grade vein intercept in hole 19OMS-005 displays greater precious metal content to that in holes 19OMS-004 and 19OMS-001 above. This likely reflects proximity to the prospective boiling horizon (white line), which is believed to be at a depth of around 380 m below surface. Irving will test this area with deep drilling during Phase Two Oblique view looking down and north-northwestward. CSAMT sections display a pervasive north-trending resistive zones (red arrows) believed to be associated with silicification generated by the hydrothermal system underlying Omu Sinter. The longest red arrow highlights the main structural zone targeted at Omu Sinter. With this data in hand, Irving plans to refine its Phase Two drill program at Omu Sinter and test this highly prospective area at depths of +380 m, the prospective level of boiling

Vein intercept (red line) in hole 19OMI-006 drilled at Omui Mine site. This interval displays brecciation along with local patches of silver sulfosalts and electrum 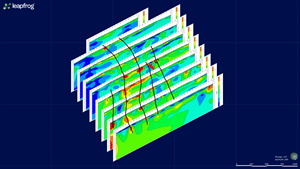 Oblique view looking down and northwestward. CSAMT sections display a pervasive west-northwest-trending resistive zone believed to be associated with silicification generated by the hydrothermal system underlying Omui Mine site. Black lines highlight resistive structures. This data is helping target some of the deeper holes being drilled at Omui Mine site during Irving’s Phase One program 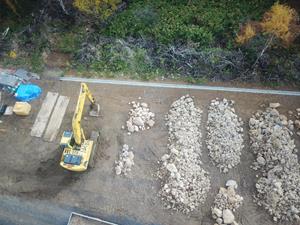 Aerial image of stockpiles of vein material recently collected from trenches at Omui Mine site. More material will be added to this in 2020 and shipped to a Japanese smelter 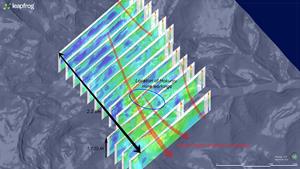 Oblique view looking down and northwestward. CSAMT sections display a pervasive west-northwest-trending resistive zone believed to be associated with silicification generated by the hydrothermal system underlying Hokuryu. This data will help target Phase One drilling at Hokuryu planned for 2020