Use of this site indicates acceptance of the Privacy Policy and Terms of Use.
The information on this Website is not reliable and not intended to provide tax, legal, or investment advice. Nothing contained on the Website shall be considered a recommendation, solicitation, or offer to buy or sell a security to any person in any jurisdiction.
CEO.CA members discuss high-risk penny stocks which can lose their entire value. Only risk what you can afford to lose.
© 2016 - Pacific Website Company Inc.
@nasdaq/k92-mining-hosts-visit-by-state-delegation-including ↻
0 online
Today This week
Search Subscribe
Members of @nasdaq/k92-mining-hosts-visit-by-state-delegation-including

VANCOUVER, British Columbia, Feb. 16, 2021 (GLOBE NEWSWIRE) -- K92 Mining Inc. (“K92” or the “Company”) (TSX: KNT; OTCQX: KNTNF) is pleased to announce that on February 12, 2020, a State Delegation, including the Honorable James Marape, Prime Minister of Papua New Guinea, the Honorable Peter Numu, Governor of Eastern Highlands Province, and the Honorable Johnson Tuke, Minister for Mining and local Member of Parliament for Kainantu, met with representatives of K92. Highly productive meetings, presentations and community events were held in Goroka and Kainantu townships, followed by a site visit to K92’s Kainantu Gold Mine in Eastern Highlands Province, PNG.

John Lewins, K92 Chief Executive Officer and Director, commented, “The Government of Papua New Guinea has been a very consistent supporter of our operations and a major factor in our ability to operate effectively during the COVID-19 pandemic environment. We are proud of what has been accomplished over the past few years at Kainantu, and especially our achievements over the past twelve months during the COVID-19 pandemic. It was truly a privilege to host Prime Minister James Marape and his delegation and provide an overview of the Kainantu Gold Mine operations and our plans for the expansion of operations going forward.

See Figure 2 for K92 CEO and Director John Lewins presenting cheque for PGK1 million to the Honorable Johnson Tuke, Minister for Mines as contribution from K92 towards the new Kainantu Market
https://www.globenewswire.com/NewsRoom/AttachmentNg/1b3f796e-c38e-45a6-b636-9cb2e2474fc6

K92 Mining Inc. is engaged in the production of gold, copper and silver from the Kora deposit at the Kainantu Gold Mine in the Eastern Highlands province of Papua New Guinea, as well as exploration and development of mineral deposits in the immediate vicinity of the mine. The Company declared commercial production from Kainantu in February 2018 and is in a strong financial position.

The Company commenced an expansion of the mine based on an updated Preliminary Economic Assessment on the property which was published in January 2019 and updated in July 2020. K92 is operated by a team of mining professionals with extensive international mine-building and operational experience.

On Behalf of the Company,

CAUTIONARY STATEMENT REGARDING FORWARD-LOOKING INFORMATION: This news release includes certain “forward-looking statements” under applicable Canadian securities legislation. Forward-looking statements are necessarily based upon a number of estimates and assumptions that, while considered reasonable, are subject to known and unknown risks, uncertainties, and other factors which may cause the actual results and future events to differ materially from those expressed or implied by such forward-looking statements. All statements that address future plans, activities, events, or developments that the Company believes, expects or anticipates will or may occur are forward-looking information, including statements regarding the realization of the preliminary economic analysis for the Kainantu Project, expectations of future cash flows, the planned plant expansion, production results, cost of sales, sales of production, potential expansion of resources and the generation of further drilling results which may or may not occur. Forward-looking statements and information contained herein are based on certain factors and assumptions regarding, among other things, the market price of the Company’s securities, metal prices, exchange rates, taxation, the estimation, timing and amount of future exploration and development, capital and operating costs, the availability of financing, the receipt of regulatory approvals, environmental risks, title disputes, failure of plant, equipment or processes to operate as anticipated, accidents, labour disputes, claims and limitations on insurance coverage and other risks of the mining industry, changes in national and local government regulation of mining operations in PNG, mitigation of the Covid-19 pandemic, continuation of the lifted state of emergency, and regulations and other matters. There can be no assurance that such statements will prove to be accurate, as actual results and future events could differ materially from those anticipated in such statements. Accordingly, readers should not place undue reliance on forward-looking statements. The Company disclaims any intention or obligation to update or revise any forward-looking statements, whether as a result of new information, future events or otherwise, except as required by law. 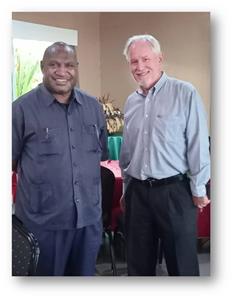 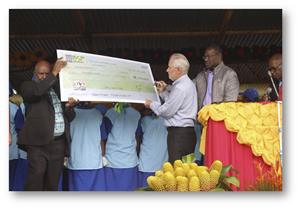 K92 CEO and Director John Lewins presents cheque for PGK1 million to the Honorable Johnson Tuke, Minister for Mines, as contribution from K92 towards the new Kainantu Market