Use of this site indicates acceptance of the Privacy Policy and Terms of Use.
The information on this Website is not reliable and not intended to provide tax, legal, or investment advice. Nothing contained on the Website shall be considered a recommendation, solicitation, or offer to buy or sell a security to any person in any jurisdiction.
CEO.CA members discuss high-risk penny stocks which can lose their entire value. Only risk what you can afford to lose.
© 2016 - Pacific Website Company Inc.
@nasdaq/kraken-completes-successful-sea-trials-of-seascout ↻
0 online
Today This week
Search Subscribe
Members of @nasdaq/kraken-completes-successful-sea-trials-of-seascout

The SeaScout® system consists of the Kraken’s Autonomous Launch and Recovery System (ALARS), Tentacle Winch® and, the KATFISH™ towed Synthetic Aperture Sonar underwater vehicle. Both the Tentacle Winch® and the ALARS are constructed of non-welded aluminum for high strength, low weight, and low magnetic signature. These properties are important for small host vehicles such as Unmanned Surface Vehicles (USVs) and Mine Counter Measures (MCM) vessels. The Tentacle Winch and ALARS are the culmination of an internal development effort started in 2017 by Kraken’s Handling Systems team located in Dartmouth, Nova Scotia.

The complete SeaScout® system will be delivered to both the Royal Danish Navy and the Polish Navy over the coming years for installation on their mine hunting vessels.

To view a video of the SeaScout® system installed on the Ocean Seeker, click here: https://youtu.be/zkaInfqBiq4

ABOUT OCEAN SEEKER
Ocean Seeker is currently docked at the COVE facility in Dartmouth, Nova Scotia where Kraken’s Unmanned Maritime Vehicles Facility is located. Ocean Seeker is a high-performance, affordable solution intended for military and commercial operators needing to maintain surveillance of their underwater installations such as offshore platforms, oil & gas installations, wind farms and marine turbines. Kraken intends to engage and deploy Ocean Seeker in conjunction with Kraken’s OceanVision™ project, a three-year, $20 million initiative focused on the development of new marine technologies and products. OceanVision™ will enable development of a recurring revenue business model from underwater data acquisition and analytics. In addition, when not being deployed as part of the OceanVision™ project, Ocean Seeker will be available for use by the ocean technology and marine survey community in Atlantic Canada.

The vessel is a former Royal Canadian Mounted Police marine patrol vessel acquired in 2019 by Kraken board member Larry Puddister. Ocean Seeker along with Kraken’s SeaScout® system will become part of a joint venture between Mr. Puddister and Kraken called Ocean Discovery Inc. 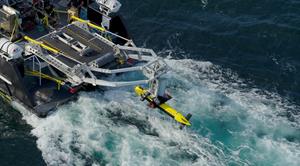 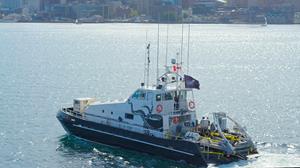 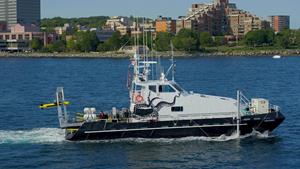