Use of this site indicates acceptance of the Privacy Policy and Terms of Use.
The information on this Website is not reliable and not intended to provide tax, legal, or investment advice. Nothing contained on the Website shall be considered a recommendation, solicitation, or offer to buy or sell a security to any person in any jurisdiction.
CEO.CA members discuss high-risk penny stocks which can lose their entire value. Only risk what you can afford to lose.
© 2016 - Pacific Website Company Inc.
@nasdaq/latest-drilling-in-southern-mali-intercepts-more-gold ↻
0 online
Today This week
Search Subscribe
Members of @nasdaq/latest-drilling-in-southern-mali-intercepts-more-gold

TORONTO, Jan. 14, 2020 (GLOBE NEWSWIRE) -- Compass Gold Corp. (TSX-V: CVB) (Compass or the Company) is pleased to provide an update on the latest exploration work at the Boumban Central and Farabakoura prospect areas, located on the Company’s Sikasso Property in Southern Mali (Figure 1).

Compass CEO, Larry Phillips, said, “Based on these results, we believe the Compass team is onto a major gold-bearing trend, and we are excited to get on with the next stage of drilling.”

He added, “Last year, our exploration work indicated the presence of a structural trend, extending more than 11 km to the north of our Farabakoura mineralized zone. These first drill holes on just a small portion of the 4.3 km Boumban Central target were located roughly 5 km north of the Farabakoura zone.  The interpreted results suggest that the correct geology and structure for potentially hosting significant gold mineralization continues at least 5 km north along this major trend. The assay results on Boumban Central also show wide-spread, lower grade mineralization.

“The additional drilling, 5 km to the south, within artisanal workings on the eastern side of the main Farabakoura Zone, also confirmed the presence of additional NE-trending mineralized structures within the overall NNW-trending Farabakoura Trend.  Assay results from this drilling showed that significant mineralization extends to the east of the main Farabakoura zone. What is most exciting is that we have already identified nine large target zones along the Farabakoura Trend, which have yet to be drilled. This latest geological and structural information confirming the location of the Siekorole Shear Zone along our Farabakoura Trend will be invaluable in planning the next phase of drilling over the remainder of the 4.3 km strike length of the Boumban Central target zone, and across the other nine targets identified by our previous exploration work.”

In mid-December, the Company completed 2,404 m of reverse circulation (RC) drilling over selected geophysical and geochemical targets on the southern portion of the Boumban Central prospect (Figure 1), which is a 1.3-km-long and 400-m-wide zone within the greater Farabakoura Trend. This trend has an overall strike length of 15 km and an up to 2-km-wide zone of anomalous gold in shallow soil samples, and abundant artisanal gold workings adjacent to the Siekorole Shear Zone.

The northeast-oriented eight-hole fence (OURC57-64) drilled at Boumban identified narrow, discrete, gold mineralization in three of the holes (Table 1).  All the mineralization was present within a granodiorite with a higher magnetic signature than the granodiorite encountered in the NW-trending line, e.g., OURC56. This drilling provided vital information on the geology of this concealed area, as well as the mineralization associated with the Siekorole Shear Zone and its related structures, which have been shown to control high-grade mineralization at Farabakoura.

The best mineralization occurred in drill hole OURC56, where six discrete zones of mineralization were intercepted within a granodiorite.  The best intercept was 3 m @ 1.33 g/t Au (from 29 m), within 10 m @ 0.57 g/t Au.  This mineralization is located to the west of the main Siekorole Shear Zone in a geological setting similar to the mineralization encountered at Farabakoura, 5 km to the south, and the Komana East open pit (owned by Hummingbird Resources PLC), 40 km to the south-southwest.  The similarities are based on: the location of the shear zone bounding fault; the metamorphosed sedimentary rocks to the east of the fault (sandstones, siltstone, black shale); and the metamorphosed intrusive (granodiorite), volcanic (basalt and dacite) and volcaniclastic (tuffs) present to the west of the fault.  The presence of gold mineralization encountered at Boumban emphasises that the rocks to the west of the Siekorole Shear Zone are the main target.  The Boumban target area is 4.7 km by 1 km, and the additional planned drilling will focus on prospective intrusions and structures there.

1True thicknesses are interpreted as 60-90% of stated intervals
2 Intervals use a 0.2-gram-per-tonne gold cut-off value

Five holes (700 m) were completed at Farabakoura in mid-December (Figure 2).  Holes OURC65-67 were drilled over a strike length 660 m of a NW-trending fault that was defined by ground magnetics and airborne EM.  This interpreted fault also follows a series of artisanal gold workings at Farabakoura.  OURC65 and 66 were both drilled with an azimuth of 140°, dip of 60°, and length of 140 m.  OURC67 was drilled to the south (180°) with a similar dip and length.  OURC65 was the best hole, and intersected nine zones of mineralization, including 8 m @ 1.17 g/t Au (from 33 m), 4 m @ 0.81 g/t Au (from 61 m), and 3 m @ 1.54 g/t Au (from 73 m) (Table 2).  This hole targeted the same mineralization as encountered in OURC17, which included 32 m @ 0.93 g/t Au (see Compass press release, May 14, 2019) and also contained visible gold.  OURC67 was designed to test potential along the NE-trending structure and the near surface east-west trending quartz veins.  A vein containing 1 m @ 1.72 g/t Au was noted at a depth of 7 m, but the speculated NE-trending fault was not encountered before the end of the hole (140 m). OURC67 encountered abundant quartz veining at the location of the speculated east-west structure, but was unmineralized.  OURC68 was drilled to test east-west trending mineralization with an azimuth of 140°, dip of 60° and length of 140 m.  Like OURC67, abundant quartz vein was present at the target depths, but the veins contained only trace amounts of gold.

OURC69 was drilled with an azimuth of 140°, dip of 60° and length of 140 m to test the premise that a secondary NE-trending vein swarm might be present in an area where diamond drilling identified high-grade gold mineralization (see Compass press release, September 5, 2019).  Eight mineralized veins were noted over a length of 100 m, with the highest-grade intercept being 2 m @ 1.50 g/t Au.  Based on the recently completed structural study, the dominant vein direction along the 15-km Farabakoura Trend should be NW-trending.

FIGURE 2 – SUMMARY OF LATEST DRILLING AT FARABAKOURA ARTISANAL WORKINGS is available at https://www.globenewswire.com/NewsRoom/AttachmentNg/0f31bf82-d9b2-45a6-a6e6-f53bc2cec991

1True thicknesses are interpreted as 60-90% of stated intervals
2 Intervals use a 0.2-gram-per-tonne gold cut-off value

Compass is planning to conduct another 4,000 m of drilling during Q1 of this year. This will include a north-south fence of eight holes (900 m) at Farabakoura to further test the presence of the large NE-trending fault interpreted to control mineralization over the artisanal workings.  The fence is also oriented to test the presence of NW- and E-W-trending veins identified during previous drilling at Farabakoura.  After completing these holes, the next target to be drilled will be Boumban South (8 holes, 1200 m).

Compass, a public company having been incorporated into Ontario, is a Tier 2 issuer on the TSX- V. Through the 2017 acquisition of MGE and Malian subsidiaries, Compass holds gold exploration permits located in Mali that comprise the Sikasso Property.   The exploration permits are located in three sites in southern Mali with a combined land holding of 867 km2.   The Sikasso Property is located in the same region as several multi-million-ounce gold projects, including Morila, Syama, Kalana and Kodiéran.  The Company’s Mali-based technical team, led in the field by Dr. Madani Diallo and under the supervision of Dr. Sandy Archibald, P.Geo, is initiating a new exploration program. They are examining the first of numerous anomalies noted for further investigation in Dr. Archibald’s August 2017 “National Instrument 43-101 Technical Report on the Sikasso Property, Southern Mali.”

All RC samples were collected following industry best practices, and an appropriate number and type of certified reference materials (standards), blanks and duplicates were inserted to ensure an effective QAQC program was carried out.  The 1 m interval samples were prepared and analyzed at SGS SARL (Bamako, Mali) by fire assay technique FAE505.  All standard and blank results were reviewed to ensure no failures were detected. 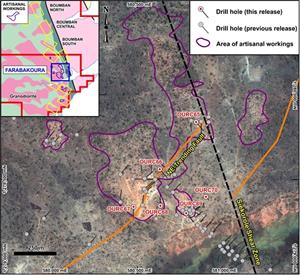