Use of this site indicates acceptance of the Privacy Policy and Terms of Use.
The information on this Website is not reliable and not intended to provide tax, legal, or investment advice. Nothing contained on the Website shall be considered a recommendation, solicitation, or offer to buy or sell a security to any person in any jurisdiction.
CEO.CA members discuss high-risk penny stocks which can lose their entire value. Only risk what you can afford to lose.
© 2016 - Pacific Website Company Inc.
@nasdaq/latest-exploration-results-on-kourou-permit-encourage ↻
0 online
Today This week
Search Subscribe
Members of @nasdaq/latest-exploration-results-on-kourou-permit-encourage

by @nasdaq on 14 May 2020, 06:40
Latest Exploration Results on Kourou Permit Encourage Immediate Follow-Up

TORONTO, May 14, 2020 (GLOBE NEWSWIRE) -- Compass Gold Corp. (TSX-V: CVB) (Compass or the Company) is pleased to provide an update on the recently completed drilling at the Samagouela prospect, located on the Company’s Sikasso Property in Southern Mali.

Compass CEO, Larry Phillips, said, “Our initial bedrock drilling at Samagouela has identified gold mineralization associated with quartz veins adjacent to a large fault, and underlying extensive artisanal workings. Artisanal miners there have reported that they have used mechanical excavators to recover ‘significant’ amounts of gold. Our drilling along the same fault also intercepted gold mineralization 1.4 km to the south of the workings.  The presence of anomalism up to 4.03 g/t gold in shallow soils samples is also highly encouraging for more bedrock gold mineralization.”

“These results are further confirmation that our permit areas have the potential to host several large, near surface, mineralized zones, which was our core objective for this year’s exploration program. Based on these promising findings, we plan an additional 950 m of AC drilling at Samagouela next month, starting right after we finish the second round at our Tarabala prospect.”

Between April 9th and 17th, the Company completed 1,497 m of air core (AC) drilling over selected geophysical and geochemical targets on the northern portion of the Kourou permit (Figure 1).  The drilling targeted a 1.5-km-long and 200-m-wide zone identified from ground geophysics, soil anomalism and the presence of artisanal workings.  The workings cover an area of 200 m x 100 m, and depths up to 22.5 m.  Artisanal miners reported in late 2018 that mechanical excavation of one area of the workings had recovered 645 oz (20 kg) of gold over a three-month period

A second area, approximately 1.4 km south of the Samagouela workings, was also investigated.  The primary target there was the interpreted offset of the north-south trending Samagouela fault and a large NE-SW oriented fault.  This second fault is coincident with unnamed artisanal workings 2 km along strike and a broad gold in shallow soil anomaly at Ourou Ourou (Figure 1).

The Samagouela prospect was drilled by three fences of AC holes (Figure 2).  The northern 12-hole fence (KOAC01-14, totalling 746 m) was designed to test the generally north-south trending interpreted fault.  Gold mineralization was encountered in drill holes KOAC04 and KOAC013 (Table 1).  KOAC04 contained an intercept of 5 m @ 1.33 g/t Au (from 49 m) and terminated in mineralization.  A broader and higher-grade zone of 10 m @ 1.67 g/t Au (from 50 m) was present in KOAC13, and included an interval of 1 m @ 13.04 g/t Au (from 50 m).  This hole also terminated in mineralization, and was targeted to intercept the known mineralization in the deepest part of the artisanal workings.

Drill targets were based on the interpretation of recently completed gradient induced polarization (IP) geophysics that identified subsurface features, and infill shallow soil geochemistry that identified areas of gold anomalism.  Indications are that this at least 10 m-wide mineralized zone is related to a NNE-trending splay on the main Samagouela fault. The highest gold content of a soil sample in the immediate area was 4.02 g/t Au (Figure 2), and it was not associated with artisanal gold workings.

Mineralization was present within metasediments (metamorphosed siltstones).  All the holes had a planned depth of 70 m, but due to the hardness of the bedrock, the average penetration was 53 m and the maximum depth reached was 68 m.  As a result, some gaps are present between drill holes, including a 25 m zone within the area of intense artisanal mining activity.

Figure 2: Map showing the location of AC drilling and summary intercepts at Samagouela is available at https://www.globenewswire.com/NewsRoom/AttachmentNg/b664d4a9-ea82-4a50-af5c-c0e34af26a89. The location of the next stage of drilling is also illustrated.

1 True thicknesses are interpreted as 60-90% of stated intervals
2 Intervals use a 0.2-gram-per-tonne gold cut-off value

As noted, additional drilling was carried out 1.4 km to the south of the main artisanal pit at Samagouela.  Two east-west trending fences, 100 m apart, were completed, including 13 drill holes (KOAC15-26) totalling 751 m.  The purpose of the drilling was to target the intersection of the north-south Samagouela fault with two other faults, a pronounced NE-trending fault and weaker NW-trending one.  Weak to moderate gold shallow soil anomalism is present in the area, although one sample collected contained 0.89 g/t Au.

Next Steps
A 19-hole, 950 m follow-up AC drill program is planned at Samagouela based on the initial drilling and interpretation of the ground geophysics.  This program is part of at least 2,500 m of AC drilling that will take place over the next four to six weeks on the Tarabala, Sodala and Samagouela prospects. The Company’s technical team is also performing in-fill shallow soil geochemistry sampling and gradient IP geophysical surveys on high-priority targets identified by previous fieldwork.

Compass, a public company having been incorporated into Ontario, is a Tier 2 issuer on the TSX- V. Through the 2017 acquisition of MGE and Malian subsidiaries, Compass holds gold exploration permits located in Mali that comprise the Sikasso Property.  The exploration permits are located in three sites in southern Mali with a combined land holding of 867 km2.   The Sikasso Property is located in the same region as several multi-million-ounce gold projects, including Morila, Syama, Kalana and Komana.  The Company’s Mali-based technical team, led in the field by Dr. Madani Diallo and under the supervision of Dr. Sandy Archibald, P.Geo, is conducting the current exploration program. They are examining numerous anomalies first noted in Dr. Archibald’s August 2017 “National Instrument 43-101 Technical Report on the Sikasso Property, Southern Mali.”

Air core drilling was performed by IDC Drilling (Senegal) and all samples were collected following industry best practices, and an appropriate number and type of certified reference materials (standards), blanks and duplicates were inserted to ensure an effective QAQC program was carried out.  The 1 m interval samples were prepared and analyzed at SGS SARL (Bamako, Mali) by fire assay technique FAE505.  All standard and blank results were reviewed to ensure no failures were detected. 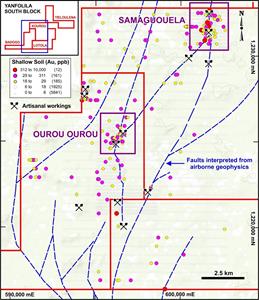 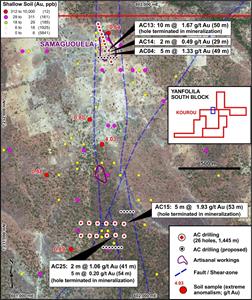