Use of this site indicates acceptance of the Privacy Policy and Terms of Use.
The information on this Website is not reliable and not intended to provide tax, legal, or investment advice. Nothing contained on the Website shall be considered a recommendation, solicitation, or offer to buy or sell a security to any person in any jurisdiction.
CEO.CA members discuss high-risk penny stocks which can lose their entire value. Only risk what you can afford to lose.
© 2022 - CEO.CA Technologies Ltd.
@nasdaq/macdonald-mines-reports-near-surface-discovery-at-scadding ↻
0 online
Today This week
Search Subscribe
Members of @nasdaq/macdonald-mines-reports-near-surface-discovery-at-scadding

TORONTO, Dec. 09, 2019 (GLOBE NEWSWIRE) -- MacDonald Mines Exploration Ltd. (TSX-V: BMK) (“MacDonald Mines”, “MacDonald” or the “Company”) announces results from four holes of its now completed Fall 2019 drilling program at the Company’s SPJ Property, 40 kilometres east of Sudbury, Ontario. Results are highlighted by hole SM-19-022 with the discovery of a significant zone of near-surface gold mineralization north of the Scadding East-West (“E-W”) Pit - 7.99 g/t gold over 26.2 metres including 10.98 g/t over 4.98 metres and 11.54 g/t over 13.24 metres was intersected from 16 to 42 metres depth. Twenty-five (25) holes have been completed with 9 holes reported to date. The remaining 16 holes are being processed and assay results will be announced as they are received.

* Assays results presented over core length. In SM-19-006 they are estimated to represent 65-75% true width in the North Zone. Additional drilling is necessary to estimate true width in the zones discovered in SM-19-018 and SM-19-022.

Quentin Yarie, MacDonald’s President and CEO commented: “Our 2019 drilling program shows that significant zones of near-surface, high-grade gold mineralization are present beyond the original footprint of the historic operations of the Scadding Deposit. Having successfully completed the first phase of our diamond drilling program at Scadding, we will now finalize the logging of all remaining drill holes, update our geological model of the deposit and define the next targets for the budgeted early 2020 diamond drilling campaign.”

Figure 1. Location of reported drilling to date relative to Scadding Mine is available at https://www.globenewswire.com/NewsRoom/AttachmentNg/477003b0-af39-4325-8618-96bc23e9e0c7

Summary of the Fall 2019 Drilling Program
The objectives of the Fall 2019 drilling program were to confirm and expand the zones of high-grade gold mineralization, documented along several mineralized structures, that form the Scadding Deposit.

The structures targeted included those associated with gold mineralization in the North, South and E-W pits of the Scadding Mine, the Scadding underground mine, the Villeneuve discovery, the historic New Zone located between the Scadding Mine and the E-W Pit, and a historic exploration pit located between the New Zone and the E-W Pit. Evidence of chlorite alteration associated with gold mineralization was observed in all the completed drill holes:

Drill core samples were transported in security-sealed bags for analyses to Bureau Veritas in Timmins, Ontario. Individual samples are labeled, placed in plastic sample bags and sealed. Groups of samples are then placed into durable rice bags and then shipped. The remaining coarse reject portions of the samples remain in storage if further work or verification is needed.

MacDonald has implemented a quality-control program to comply with best practices in the sampling and analysis of drill core. As part of its QA/QC program, MacDonald inserts external gold standards (low to high grade) and blanks every 20 samples in addition to random standards, blanks, and duplicates. All samples over 10 g/t gold or the samples with abundant visible gold are analysed by 1 kilogram metallic screen.

Historically, the Scadding Mine produced 914 kilograms of gold from 127,000 tonnes of mineralized material grading 7.2 g/t (OFR 5771). MacDonald’s reinterpretation of the geological model at the Scadding Deposit and larger SPJ property indicates that it could host a gold-rich Iron-Oxide-Copper-Gold deposit and that significant gold structures may have been missed by previous operators’ drilling campaigns (2009-2011).

Qualified Person
Quentin Yarie, P Geo. is the qualified person responsible for preparing, supervising and approving the scientific and technical content of this news release.

The Company's common shares trade on the TSX Venture Exchange under the symbol "BMK". 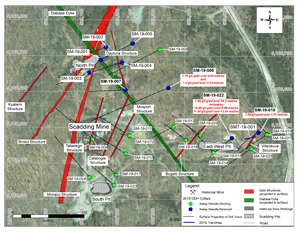 Location of reported drilling to date relative to Scadding Mine 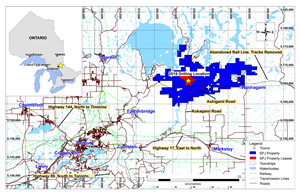