Use of this site indicates acceptance of the Privacy Policy and Terms of Use.
The information on this Website is not reliable and not intended to provide tax, legal, or investment advice. Nothing contained on the Website shall be considered a recommendation, solicitation, or offer to buy or sell a security to any person in any jurisdiction.
CEO.CA members discuss high-risk penny stocks which can lose their entire value. Only risk what you can afford to lose.
© 2016 - Pacific Website Company Inc.
@nasdaq/mandalay-resources-corporation-announces-significant ↻
0 online
Today This week
Search Subscribe
Members of @nasdaq/mandalay-resources-corporation-announces-significant

by @nasdaq on 17 Feb 2021, 07:30
Mandalay Resources Corporation Announces Significant Grades and Depth Extension to the Lake Zone Veining of the Björkdal Deposit

Note: Significant drill composites are provided in Table 1 in the Appendix to this document.

Dominic Duffy, President and Chief Executive Officer of Mandalay, commented, “Given Björkdal’s long mine life of over 10 years, our exploration focus there has shifted away from incremental additions to existing resources and reserves to identifying and drilling more prospective areas with higher-grade mineralization possibilities. These exciting initial high-grade intercepts from the depth extension drilling have demonstrated significant continuation within the Lake Zone area. Follow up infill drilling will be ongoing as we endeavour to define the breadth of veining and bring these areas to production in the short term.”

Mr. Duffy continued, “Delivering an additional high-grade mining area for the operations will further enhance our ability to be selective in ore scheduling and ultimately lift production grade.”

Mr. Duffy concluded, “Alongside this exploration release, a video has been prepared by Mr. Chris Davis, Vice President of Operational Geology and Exploration to further illustrate the detail in this press release, I would like to invite everyone to view the posted video here.”

Since September 2020, a major focus of exploration at Björkdal has been on the depth and eastern extension of the Lake Zone veining. This veining sits beneath the marble unit, below and to the south of the Aurora Zone. This initial phase of drilling encompasses nine drillholes and has intercepted 15 veins containing some of the best grades seen at Björkdal. Interpretation of the drilling indicates that the veining is continuous though all holes drilled which is supported by our understanding of Lake Zone veining. Grades along these veins vary, however, for a 100 m strike along veining at 1600N three drillholes average a grade of 4.7 g/t gold over nominal mining width of 3 m.

As well as the vein intercepts themselves, skarnified marble was intercepted in two of the drill holes indicating either a depth continuation to the previously mined Lake Zone Skarn or a discreet alterations lens. Veining within these lenses has been proven to be enriched and skarnified areas have predominantly delivered high grade ore so the presence of the alteration is highly encouraging.

The results of drilling in this area suggest the possibility of a significant increase in the development life of the Björkdal mine by providing a new mining area beyond the current workings on Main Zone and Aurora.

The drilling undertaken on this program to date marks the initial phase of exploration and an infill program has begun and is expected to be completed in Q2 2021.

Figure 2: Plan section of Björkdal mine illustrating the location of drilling and results from the Björkdal Deeps program. Newly extended veining it interpreted in red. Marble contact is interpreted in blue:
https://www.globenewswire.com/NewsRoom/AttachmentNg/0399fdd4-7e29-4468-9b53-7e7c7ad9daa3

Figure 3: North-South Cross Section illustrating the location and orientation of the new intercepts extending the Lake Zone veining down and to the east. Veining and interpreted lithology is displayed at 1780E with off-section holes projected onto the plain:
https://www.globenewswire.com/NewsRoom/AttachmentNg/40bedda3-53c6-4f7e-95b7-81ca59167142

All diamond drill core was logged and sampled by Björkdal geologists. Exploration drill hole samples were sent to CRS Laboratories Oy (“CRS”) in Kempele, Finland for sample preparation and assaying.

Chris Davis, Vice President of Operational Geology and Exploration at Mandalay Resources, is a Chartered Professional of the Australasian Institute of Mining and Metallurgy (MAusIMM CP(Geo)), and a Qualified Person as defined by NI 43-101. He has reviewed and approved the technical and scientific information provided in this release.

Mandalay Resources is a Canadian-based natural resource company with producing assets in Australia and Sweden, and care and maintenance and development projects in Chile. The Company is focused on growing production at its gold and antimony operation in Australia, and gold production from its operation in Sweden to generate near term cash flow. 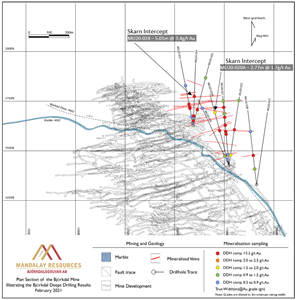 Plan section of Björkdal mine illustrating the location of drilling and results from the Björkdal Deeps program. Newly extended veining it interpreted in red. Marble contact is interpreted in blue. 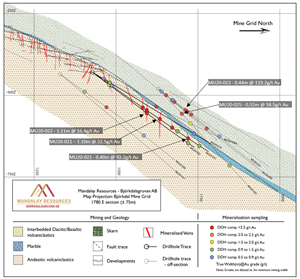 North-South Cross Section illustrating the location and orientation of the new intercepts extending the Lake Zone veining down and to the east. Veining and interpreted lithology is displayed at 1780E with off-section holes projected onto the plain.