Use of this site indicates acceptance of the Privacy Policy and Terms of Use.
The information on this Website is not reliable and not intended to provide tax, legal, or investment advice. Nothing contained on the Website shall be considered a recommendation, solicitation, or offer to buy or sell a security to any person in any jurisdiction.
CEO.CA members discuss high-risk penny stocks which can lose their entire value. Only risk what you can afford to lose.
© 2016 - Pacific Website Company Inc.
@nasdaq/midland-identifies-numerous-targets-on-its-gold-projects ↻
0 online
Today This week
Search Subscribe
Members of @nasdaq/midland-identifies-numerous-targets-on-its-gold-projects

by @nasdaq on 18 Sep 2019, 07:30
Midland Identifies Numerous Targets on Its Gold Projects in the Abitibi Belt

MONTREAL, Sept. 18, 2019 (GLOBE NEWSWIRE) -- Midland Exploration Inc. (“Midland”) (TSX-V: MD) is pleased to report that several new prime exploration targets have been identified on its gold projects in the Abitibi Belt, namely in the Detour Lake belt in northern Abitibi (Sunday Lake, Lower Detour and B26 fault zones), in the Lebel-sur-Quevillon area, and on its properties located near the prolific Cadillac and Destor-Porcupine fault zones in southern Abitibi.

In addition, Midland would like to announce it is actively seeking new partnerships for many of its projects in order to launch new exploration campaigns as early as the fall of 2019.

In the Detour Lake belt, Midland controls more than 40 kilometres of favourable stratigraphy near the Sunday Lake and Lower Detour faults and along the extensions of the B26* deposit. This extensive area includes the Casault JV, La Peltrie, Adam, and Samson gold properties, where several new drilling targets have been identified. Those targets include four (4) IP anomalies located in the extension of the Vortex Zone on Casault, three (3) IP anomalies on La Peltrie and four (4) new ground EM conductors on Samson as well as five (5) untested VTEM/TDEM conductors located just north of the Brouillan-Enjalran regional contact.

The Casault JV project is currently a 50/50 joint venture with SOQUEM Inc. It is located along the Sunday Lake Fault, approximately 40 kilometres east of the Detour Lake* mine. In 2017, Midland and SOQUEM discovered the Vortex zone, a significant gold-bearing system associated with alkaline intrusions. Midland is currently planning a new drilling campaign to test the eastward extension of the Vortex zone along a subsidiary of the Sunday Lake Fault, where the fault comes in contact with Timiskaming-type conglomerates and mafic volcanic rocks.

On the Adam property, new electromagnetic (VTEM and TDEM) targets were identified in felsic rocks of the Brouillan Group, near the regional contact zone with the Enjalran Group. These new targets have never been drill-tested and sit at the same stratigraphic level as the B26 deposit, located approximately 15 kilometres further west, about 20 kilometres east of the former Selbaie* mine. In addition, this property, wholly owned by Midland, has excellent gold potential as it is located less than 8 kilometres due east of the B14 deposit, where historic drill results reaching 13.0 g/t Au over 8.75 metres are reported.

Midland recently completed a 3D model in Leapfrog to generate new targets on the Maritime-Cadillac JV project, currently in joint venture with Agnico Eagle, just east of the former Lapa mine. This modelling effort led to the generation of six (6) new drilling targets, located along the Dyke East, Dyke West, and Contact Maritime favourable horizons.

The Heva gold project is wholly owned by Midland. It is located approximately 5 kilometres northwest of the Canadian Malartic* open pit mine, which is currently jointly operated by Agnico Eagle and Yamana. This project covers conglomerates and wackes of the lower Timiskaming Group near the contact with the Piche Group and the Cadillac Fault located in the south part of the property. In recent years, Midland has conducted a few prospecting campaigns, soil geochemistry surveys and diamond drilling, mainly focussing on an area where new high-grade gold occurrences graded up to 41.0 g/t Au and 38.5 g/t Au in grab samples and up to 24.1 g/t Au over 0.5 metre in channel sample. Upcoming efforts will focus on testing the southern contact of the Timiskaming conglomerates, near the contact with the Piche Group and the Cadillac Fault. This area with strong gold potential is poorly exposed on surface, has never been covered by induced polarization surveys and has never been drill-tested.

The Patris property offers excellent gold potential as it covers the Manneville Fault over more than 8 kilometres, as well as the La Pause Fault over more than 10 kilometres. Both faults are known subsidiary branches of the famous Destor-Porcupine Fault. The geological setting on the Patris property is similar to that of the Malartic mining camp and the South Barnat deposit on the Canadian Malartic property, jointly held by Agnico Eagle Mines Limited and Yamana Gold Inc., i.e., a faulted juxtaposition of clastic metasedimentary rocks and ultramafic units intruded by a porphyry dyke swarm. In 2015, drill hole PAT-15-05 intersected a wide alteration zone with anomalous gold values containing pyrite, chalcopyrite, galena and molybdenite, hosted in syenitic and ultramafic rocks with strong fuchsite, quartz and carbonate alteration along the Destor-Porcupine Fault.

On the Laflamme JV project, in joint venture with Abcourt Mines, new drilling targets were identified following a Gradient IP survey covering the diorite that hosts the Longshot showing discovered in the winter of 2019, which graded up to 0.25 g/t Au over 10.0 metres, including 2.19 g/t Au over 0.70 metre. Midland is currently planning a new drilling program to test these new gold targets.

The true thickness of reported drill intervals cannot be determined with the information currently available.

Mineralization occurring at the mines and deposits listed above is not necessarily representative of mineralization that may be found on projects held by Midland described herein.

All analyses were performed by ALS Minerals in Val-d’Or, Quebec. All samples were analyzed for gold by fire assay with atomic absorption (AA) finish on 30-gram fractions, and all samples with grades above 3.0 g/t Au were reanalyzed with gravimetric finish. For quality control purposes, certified standards and blanks were inserted in all sample batches at regular intervals in the sample stream. All data were reviewed by Mario Masson, certified geologist and VP for Midland, a Qualified Person as defined by NI 43-101.

Midland targets the excellent mineral potential of Quebec to make the discovery of new world-class deposits of gold, platinum group elements and base metals. Midland is proud to count on reputable partners such as BHP Billiton Canada Inc., Agnico Eagle Mines Limited, Osisko Mining Inc., SOQUEM INC., Nuvavik Mineral Exploration Fund, and Abcourt Mines Inc. Midland prefers to work in partnership and intends to quickly conclude additional agreements in regard to newly acquired properties. Management is currently reviewing other opportunities and projects to build up the Company portfolio and generate shareholder value.

This press release was prepared by Mario Masson, P.Geo., VP Exploration for Midland and Qualified Person as defined by NI 43-101. For further information, please consult Midland’s website or contact:

This press release may contain forward-looking statements that are subject to known and unknown risks and uncertainties that could cause actual results to vary materially from targeted results. Such risks and uncertainties include those described in Midland's periodic reports including the annual report or in the filings made by Midland from time to time with securities regulatory authorities. 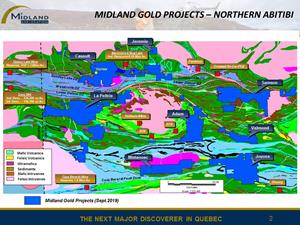 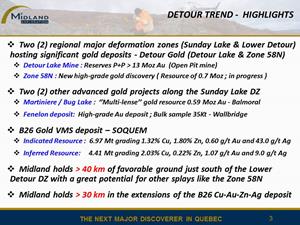 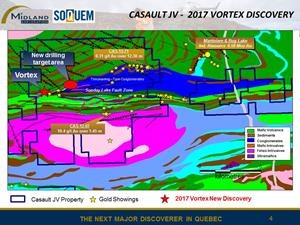 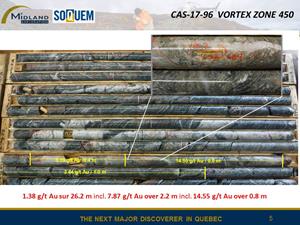 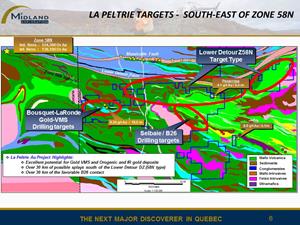 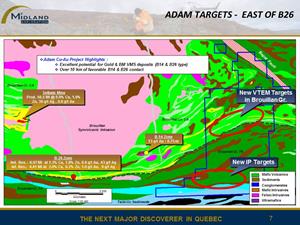 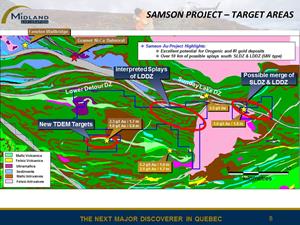 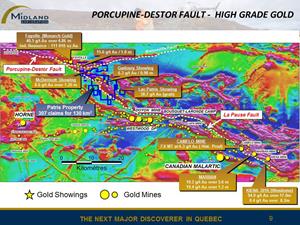 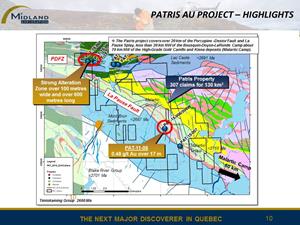 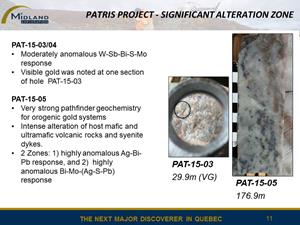