Use of this site indicates acceptance of the Privacy Policy and Terms of Use.
The information on this Website is not reliable and not intended to provide tax, legal, or investment advice. Nothing contained on the Website shall be considered a recommendation, solicitation, or offer to buy or sell a security to any person in any jurisdiction.
CEO.CA members discuss high-risk penny stocks which can lose their entire value. Only risk what you can afford to lose.
© 2021 - CEO.CA Technologies Ltd.
@nasdaq/novo-identifies-ni-cu-targets-at-southcourt-andover ↻
0 online
Today This week
Search Subscribe
Members of @nasdaq/novo-identifies-ni-cu-targets-at-southcourt-andover

VANCOUVER, British Columbia, Nov. 30, 2021 (GLOBE NEWSWIRE) -- Novo Resources Corp. (“Novo” or the “Company”) (TSX: NVO, NVO.WT & NVO.WT.A) (OTCQX: NSRPF) is pleased to advise that it has recently identified and advanced a series of Au-Cu and Ni-Cu-Co targets on EL47/1745, adjacent to Andover1 and Carlow Castle2 in the West Pilbara region of Western Australia, although there is no certainty that EL47/1745 contains the same levels of mineralization as either of these discoveries.

Results and technical information referred to in this news release from Azure, Legend, Artemis, Westfield Minerals Ltd (“Westfield”) and AMAX Exploration (“AMAX”) are not necessarily representative of mineralization throughout the district. This historical data was disclosed in ASX announcements, other public disclosure documents, and annual exploration reports filed on the Western Australian Department of Mines, Industry Regulation and Safety’s (“DMIRS”) website (collectively, “Disclosure”) issued by Azure, Legend, Artemis, Westfield, and AMAX. The technical information contained herein has been extracted from this Disclosure. Reference should be made to the relevant Disclosure which is available online at the links provided in various footnotes throughout this news release.

Three weak VTEM conductors 3km WNW of Andover are present in a zone of complex geology within the Andover intrusion at Novo’s Southcourt prospect (Figure 1), including layered gabbro and ultramafic intrusive rocks.

One high intensity VTEM anomaly is present at Milburn, 1.4km ESE from the east end of Carlow Castle. Previous work by Legend6 included eight lines of ground EM which identified a single conductor modelled to a dip of 45o west at a depth of 35 m. The EM anomaly was followed up by Legend5,7,8 with 17 -2 mm soil samples which returned peak values of 36 and 33 ppb Au and previous rock chip sampling yielded values of 4.83% Cu, 0.15 g/t Au and 0.21% Ni. The anomaly was not drilled by Legend.

In 1967, Westfields Minerals9 defined a 1 km long induced polarization (“IP”) anomaly (Fig. 3) to the south of the EM conductor and completed shallow vertical percussion holes with a best result of 6m @ 0.22% Ni and 0.15% Cu (BH31) (Fig. 3). Subsequent drilling in 1971 by AMAX10 intersected a sequence of mafic and ultramafic rocks with 1 to 10% disseminated sulfides (pyrite, pyrrhotite and rare chalcopyrite) with best results from PDH20A (Fig. 3) of 3.66 m @ 0.23% Ni and 0.17% Cu. These results are not necessarily representative of mineralization throughout the entire district. Importantly, Au, Co and PGE minerals were not analyzed.

Anna Valley, which is in the SW corner of EL47/1745. This VTEM anomaly defined by Legend4,5 was followed up with a ground fixed loop transient EM (“FLTEM”) survey6 defining a strong conductor dipping between 35 - 55°to the northwest with a modelled depths of 30 to 35 m. The target was thought to relate to a chert body which outcrops to the west, but the target is under thick alluvial and colluvial cover.

Fortune South #1 and #2, which are part of a 2 km long shear zone with several historic workings and a number of metal detector pits where sheared gabbro and anastomosing quartz veins are present. Previous sampling has assayed up to 8.51 g/t Au and 0.134% Cu on EL47/17458. pXRF rock chip samples at Fortune South #2 into banded and sheared Cu-rich gossan (Figure 5d) yielded peak values of 60% Cu and 802 ppm Ni. These target types (shear-related Au-Cu) are not highlighted by VTEM.

Thorpe East, which is part of a 2 km long shear corridor with several historic workings and peak assay results of 3.11 ppm Au8. Novo has identified significant gossanous zones (Figure 5c) associated with quartz veining, yielding up to 676 ppm As, 3.5% Cu, 0.15% Ni, and 48.6 ppm Mo. These target types (shear-related Au-Cu) are not highlighted by VTEM.

Carlow Castle Extension, on which Artemis2 have reported a soil geochemical anomaly and favourable stratigraphy along strike and to the east of Carlow Castle, on EL47/1745, directly north of Milburn. Novo has not yet conducted any work on this 1.7 km long zone of potential. This orogenic Au-Cu-Co target type is not highlighted by VTEM.

The foregoing results at Anna Valley, Fortune South #1 and #2, and Thorpe East are not necessarily representative of mineralization throughout the entire district.

The pXRF assay technique utilized a Niton XL5 handheld XRF machine. The Niton is calibrated daily, with 4 QAQC standards (fit for purpose including certified Ni, Cu and Co values) run concurrently, with an additional 2 standards checked per 100 readings and 4 QAQC standard assayed before the machine is shut down. pXRF is utilized as a preliminary exploration technique for base metals. Soil samples are unprepared and analysed for 30 seconds using two machine filters and rock chip samples are point analysed for 90 seconds using 4 machine filters. The pXRF is a spot reading device and has diminished precision due to grainsize effect, especially on rock samples where peak results represent a window of < 10mm field of view.

Dr. Quinton Hennigh (P.Geo.) is the qualified person, as defined under National Instrument 43-101 Standards of Disclosure for Mineral Projects, responsible for, and having reviewed and approved, the technical information contained in this news release other than the technical information extracted from the Disclosure. Dr. Hennigh is the non-executive co-chairman and a director of Novo.

Novo operates its flagship Beatons Creek gold project while exploring and developing its prospective land package covering approximately 13,250 square kilometres in the Pilbara region of Western Australia. In addition to the Company’s primary focus, Novo seeks to leverage its internal geological expertise to deliver value-accretive opportunities to its shareholders. For more information, please contact Leo Karabelas at (416) 543-3120 or e-mail leo@novoresources.com. 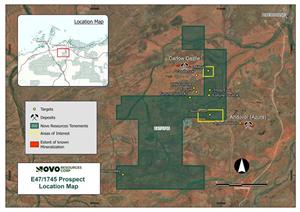 EL47/1745 location and priority targets, in relation to Andover and Carlow Castle. 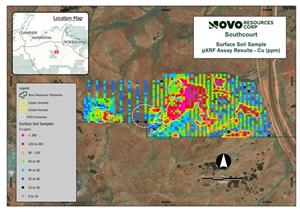 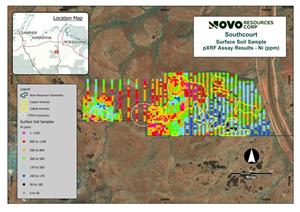 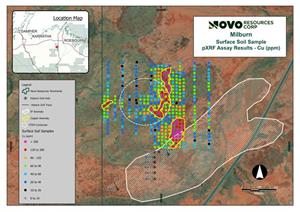 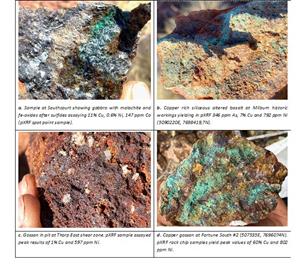