Use of this site indicates acceptance of the Privacy Policy and Terms of Use.
The information on this Website is not reliable and not intended to provide tax, legal, or investment advice. Nothing contained on the Website shall be considered a recommendation, solicitation, or offer to buy or sell a security to any person in any jurisdiction.
CEO.CA members discuss high-risk penny stocks which can lose their entire value. Only risk what you can afford to lose.
© 2016 - Pacific Website Company Inc.
@nasdaq/osino-resources-completes-ip-survey-identifying-five ↻
0 online
Today This week
Search Subscribe
Members of @nasdaq/osino-resources-completes-ip-survey-identifying-five

VANCOUVER, British Columbia, Aug. 05, 2020 (GLOBE NEWSWIRE) -- Osino Resources Corp. (TSXV: OSI) (FSE: RSR1) ("Osino” or “the Company”), is pleased to announce the completion of an Induced Polarization (IP) survey over the Twin Hills Project covering a total of 16km2. The survey has outlined a number of new drill targets below the calcrete cover as well as extended and amplified the scale of known targets previously indicated by gold-in-calcrete, and magnetic anomalies.

The gradient array IP survey was completed over two months by contractors Greg Symons Geophysics (GSG) Namibia. It was carried out in a series of layout blocks 1 x 1 to 2 x 2km in area, then stitched together and levelled. The survey area covers most of the buried, prospective geology at Twin Hills and has added a valuable new layer of data, which directly detects sulphide mineralization associated with gold and enhances the geological mapping confidence.

Dave Underwood, Osino’s VP Exploration commented: “We believe that there is a very significant amount of additional mineralization to be found at the Twin Hills project as much of the 11km of strike and structure parallel to Twin Hills Central has not been tested yet. The entire Twin Hills area is covered by calcrete and windblown sand, and it is thus imperative to use geophysical techniques as we initially did with the ground magnetic survey. IP is an additional such tool which has enabled us to gather another layer of data on the subsurface geology and mineralization before embarking on this follow-on drill program to test these areas. The IP survey started with orientation work over known mineralization at Twin Hills Central, which confirmed that the IP was identifying sulphide mineralization associated with gold below thick calcrete cover, and this gave us the confidence to survey the entire Twin Hills area.”

He continued: “The results produced have far exceeded our expectations and everyone is very excited about the identified new targets which include large, strong chargeability anomalies at The Dex, T Dog and South Dog, which have a similar size and shape IP response to Twin Hills Central. We are currently gearing up to bring in additional RC and percussion rigs to get started on these exciting new targets in August.’’

However, non-magnetic sulphide arsenopyrite, which is strongly associated with known gold, is not detectable with magnetic surveying. The addition of the IP data allows the detection of such non-magnetic disseminated sulphide mineralization.

As Figure 1 indicates, the IP survey has been effective in identifying a number of compelling new targets that are consistent with geology, structure and gold-in-calcrete geochemistry. Initial orientation work, including defining the physical properties of the mineralized rocks, confirmed the correlation between IP anomalies and gold-bearing sulphide mineralization.

Osino is therefore confident that these targets should be tested immediately and is in the process of lining up RC and percussion drill rigs to complete this work.

A number of new targets have been defined by high chargeability anomalies in the IP data, similar in form and intensity to Twin Hills Central (refer to Figure 1). Exploration targets have been prioritized according the strength of the IP anomaly, coincidence with gold-in-calcrete and magnetic anomalies, as well as the geological and structural setting.
The higher priority targets include the following:

An additional 5,000m of diamond drilling has been added to the existing 20,000m diamond drill program to cover the highest priority IP targets as well as extensions to known mineralization. These include T-Dog, Clouds, The Dex and Road. These inclined holes will be drilled on fence lines with collars spaced 100m apart and a depth of at least 200m.

A further 8,000m of RC drilling utilizing 200m deep inclined holes at 100m line spacing will be completed across moderate IP anomalies supported by geochemistry and/or magnetics. This layout provides continuous coverage of the geology and mineralization along the fence lines with the objective of drilling gold bearing intercepts in the new targets. RC drilling is applied in preference to diamond drilling on the larger of the moderate strength IP targets, as it is faster and cheaper. This will be focused particularly on along-strike extensions of Twin Hills Central, as well as to the immediate south of Twin Hills Central, where possible fault repetition of the mineralized horizon has occurred.

An additional 10,000m of percussion drilling is scheduled for other moderate priority IP anomalies in order to assist with identifying mineralization which does not outcrop against the bottom of the calcrete cover due to faulting. These holes will be drilled on fence lines with collars 50m apart with depths varying depending on the thickness of the calcrete (average 25m) for an expected total of approximately 10,000 m. The objective of this drilling is to define new bedrock anomalies, which can then be followed-up with RC and diamond drilling.

This method was used with great success in 2019 to define the Twin Hills Central target before the initial diamond drill program.

Prior to the award of the IP survey contract, a downhole physical properties probe was employed to test key drill holes and confirm that the disseminated sulphide mineralization associated with the gold produces a chargeability anomaly which could be detected in an IP survey. The physical properties data clearly showed that disseminated pyrrhotite and arsenopyrite mineralization (which is associated with gold) produces a strong chargeability anomaly.

The gradient array (GA) survey was carried out in a series of 1km x 1km to 2km x 2km setups, then stitched together and levelled. An IP survey produces two sets of data namely chargeability and resistivity. The chargeability is of particular use in the Twin Hills setting, as it directly detects the disseminated sulphide mineralization, which has the ability to hold a measurable charge. The resistivity data is also of value as it allows the differentiation of some of the covered sedimentary units.

The initial part of the IP survey was an orientation survey over known (drilled) mineralization at Twin Hills Central to confirm the effectiveness of the gradient array set up.  The known mineralization produced a strong chargeability anomaly and the decision was therefore taken to survey the entire Twin Hills area for a total of 16 km2.

Of particular importance is that the IP survey has produced new targets that were not visible in the ground magnetic data that was previously used for detection of buried sulphide mineralization. The dominant sulphide mineral at Twin Hills is pyrrhotite, a high temperature, magnetic iron sulphide. However, the gold is more closely associated with arsenopyrite, which is non-magnetic.

The Twin Hills Project lies within the Kuiseb Formation, a sequence of metamorphosed turbiditic sediments several kilometers thick, which was tightly folded during the Damaran Orogen. The gold mineralization at Twin Hills Central is hosted in an interbedded unit of meta-greywacke and schist on the southern margin of the Karibib Basin between the Karibib Fault and the Dobbelsberg Dome. The gold mineralization is associated with silica and sulphide alteration occurring both as disseminated grains as well as in centimeter scale veinlets.

The Induced Polarization (IP) and Resistivity data on the Twin Hills Project was collected by Gregory Symons Geophysics (GSG) (SP). GSG has been active in Southern Africa and Namibia since 2002 in the collection and interpretation of geophysical data specializing in Electro-Magnetics (EM), Induced Polarization and Resistivity, Natural Source Magneto-Tellurics (NSAMT) and Gravity. Surveys have been performed in support of major mining projects such as Navachab Gold, Otjikoto Gold, Husab Uranium, and Skorpion Zinc as well as assisting in exploration for the major and junior exploration companies throughout Southern, Central and Eastern Africa.

David Underwood, BSc. (Hons) is Vice President Exploration of Osino Resources Corp. and has reviewed and approved the scientific and technical information related to geology and exploration in this news release. Mr. Underwood is a registered Professional Natural Scientist with the South African Council for Natural Scientific Professions (Pr. Sci. Nat. No.400323/11) and a Qualified Person for the purposes of National Instrument 43-101.

Osino is a well-financed Canadian gold exploration company with an active exploration program across our large Namibian ground position. Osino’s focus in 2020 is on defining and expanding our exciting new Twin Hills gold discovery within the developing Karibib Gold District. Twin Hills is a large, sediment-hosted, structurally controlled orogenic gold system, buried under approximately 20m of calcrete and windblown Kalahari sand and was discovered by Osino in 2019 following a systematic & innovative exploration campaign and the application of solid geological science.

Osino is also advancing a range of other gold prospects and targets across our approximately 7,000 km2 ground position by utilizing a portfolio approach geared towards discovery.

Our core projects are favorably located north and north-west of Namibia’s capital city Windhoek. By virtue of their location, the projects benefit significantly from Namibia’s well-established infrastructure with paved highways, railway, power and water in close proximity. Namibia is mining-friendly and lauded as one of the continent’s most politically and socially stable jurisdictions. Osino continues to evaluate new ground with a view to expanding its Namibian portfolio. 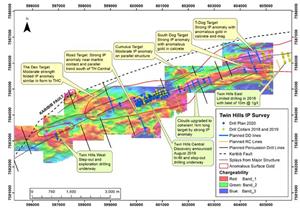