Use of this site indicates acceptance of the Privacy Policy and Terms of Use.
The information on this Website is not reliable and not intended to provide tax, legal, or investment advice. Nothing contained on the Website shall be considered a recommendation, solicitation, or offer to buy or sell a security to any person in any jurisdiction.
CEO.CA members discuss high-risk penny stocks which can lose their entire value. Only risk what you can afford to lose.
© 2016 - Pacific Website Company Inc.
@nasdaq/osino-resources-expands-twin-hills-central-strike-length ↻
0 online
Today This week
Search Subscribe
Members of @nasdaq/osino-resources-expands-twin-hills-central-strike-length

Heye Daun, Osino’s President & CEO commented: “The results of this year’s drilling have far exceeded our expectations and have further strengthened our conviction in Twin Hills Central’s growing stature as Namibia’s next major gold deposit. The closely spaced drilling (50x50m collars) demonstrates excellent continuity of mineralization along strike, down dip and towards the north-east where we have discovered an unexpected but welcome, shallower zone of mineralization. Hole OKR080 on the north side is particularly exciting as it intercepted high grade in a new shoot (8m @ 3.67g/t) and ended in another high-grade intercept of 3m @ 5.46g/t. There have also been several mineralized holes in the gap between the western and eastern lobes (including two with shallow higher grade) in an area previously thought to be barren. We are accordingly putting in place the manpower and infrastructure to be able to expand our drilling rate next year beyond the currently used 8 rigs. This will enable us to fast-track the development drilling whilst at the same time expanding brownfields exploration and target testing to make new discoveries.”

In-fill and step out drilling to define a Maiden Resource Estimate (“MRE”) is underway at THC with five diamond and three RC drill rigs. The first phase of the MRE drilling (33,300m) was completed on October 11th and after a short break the second phase (20,000m) commenced on October 27th, to be completed by February 2021.   As much as possible, but likely not all, of that drilling will be included in the 43.101 compliant resource estimate which Osino plans to publish before the end of Q1 2021.

A photo accompanying this announcement is available at https://www.globenewswire.com/NewsRoom/AttachmentNg/c6011a60-d32e-4164-b4de-925ffa57d20b

Drilling is being carried out on 50 x 50m drill spacing, covering the entire THC deposit, with drill depths of mostly 200m at 60 degrees inclination towards the south. Two deep holes (OKD058 and OKD022) were drilled towards the NNW (opposite to all the other holes) to test the continuity and down-dip extent of the mineralization and to see if there are other mineralizing structures not picked up in the rest of the holes.

Drilling on the western lobe of THC has defined a very wide, consistently mineralized zone vertically down to 350m and open to depth. Recent drilling indicates that the mineralization continues in a narrower zone along strike to the southwest.

The eastern lobe of THC has grown significantly since the previous news release, dated August 24, 2020. A new zone of high-grade gold to the north of the previously known mineralization was discovered with hole OKR080 (8m @ 3.67g/t). In addition, the eastern lobe has been expanded on strike by about 150m to the east along the strong IP anomaly and west into the gap between the western and eastern lobes, which was previously thought to be barren.

The gap between the east and West Lobes has been greatly diminished with the discovery of shallow high-grade mineralization in hole OKR056 (25m @ 2.00g/t) as well as the expansion of the East Lobe.

Assays received for the West Lobe (or what is sometimes referred to as the “bulge”) have confirmed and extended the unusual width and continuity of mineralization, which is exceptionally wide for an orogenic style deposit. It now has a maximum apparent width of 250m and is continuous down dip to beyond 300m (refer to Figure 2).

A photo accompanying this announcement is available at https://www.globenewswire.com/NewsRoom/AttachmentNg/5c6b2eb1-84c8-4b75-a215-4416a818da02

The West Lobe also has a higher-grade core, which plunges towards the northeast and deeper holes confirm that this mineralization keeps going to depth in the northeasterly direction. In addition, recent drilling on the south western edge of this lobe indicates that a narrow zone of gold mineralization continues in this direction as well (refer to Figure 1). Phase 2 drilling will include further deep drilling to test the mineralization at depth and along strike to the west and northwest.

The East Lobe has mineralization up to 100m wide and 300m down dip, potentially going deeper as indicated on Figure 3 below. The grades in the East Lobe are generally higher than in the West Lobe and appear to be focused into narrower zones, although the style of mineralization and host rocks are the same.

The size of the East Lobe has increased substantially and has extended the strike extent of THC by 150m to the east and remains open along strike and depth. Recent drilling indicates that the mineralization continues to the east of the previously reported margin, along a strong IP anomaly which is visible in Figure 1.

Hole OKR080, which is the most northerly hole drilled on the East Lobe to date, intersected a previously unknown zone of high-grade mineralization (8m @ 3.67g/t) and also ended in high grade at 220m (3m @ 5.15g/t). Refer to Figure 4 above.

Additional drill holes have now been added to the north and east of the East Lobe for the Phase 2 drilling to be completed before February 2020.

A photo accompanying this announcement is available at https://www.globenewswire.com/NewsRoom/AttachmentNg/efd7ef82-1752-402a-b66d-0699757fae6e

A photo accompanying this announcement is available at https://www.globenewswire.com/NewsRoom/AttachmentNg/2730cee0-f168-406d-900e-90ab8bf931e0

The results to date indicate that the mineralization continues between the West and East lobes as a series of wider spaced zones. This augurs well for the development of a continuous large-scale pit over the entire THC strike length.

Figure 5 below is a plan of all holes drilled and planned for the THC maiden resource estimate. The collars in blue with black center are completed holes that have assays outstanding. The holes planned for Phase 2 of the MRE drill program are shown as black squares.

A photo accompanying this announcement is available at https://www.globenewswire.com/NewsRoom/AttachmentNg/7daa4301-8467-435b-a47c-d6fc9f5bca48

The table on the following pages summarizes the significant intercepts received since the previous news release of drill assays from THC.

* Reverse hole – drilled on azimuth of 340 degrees
1 Unconstrained intersections – all intercepts above 0.4g/t reported
Notes: All reported intercepts are apparent widths rounded to the nearest meter. True widths are unknown at this stage. Total intercepts reported are unconstrained. Included intercepts are at 0.4g/t cut-off, minimum 2m wide and no more that 2m internal dilution. Collar positions are in UTM WGS84 surveyed by digital GPS.

David Underwood, BSc. (Hons) is Vice President Exploration of Osino Resources Corp. and has reviewed and approved the scientific and technical information in this news release, and is a registered Professional Natural Scientist with the South African Council for Natural Scientific Professions (Pr. Sci. Nat. No.400323/11) and a Qualified Person for the purposes of National Instrument 43-101.

Osino is a Canadian gold exploration company, focused on the acquisition and development of gold projects in Namibia. Having achieved our initial vision of finding Namibia’s next significant gold deposit, we are now focused on rapidly advancing the exciting Twin Hills gold discovery and to make new discoveries elsewhere along the belt. This we will achieve with Osino’s winning formula of combining innovation & drive with technical experience & strong financial backing.

Our portfolio of exclusive exploration licenses is located within Namibia’s prospective Damara mineral belt, mostly in proximity to and along strike of the producing Navachab and Otjikoto Gold Mines. Osino is targeting gold mineralization that fits the broad orogenic gold model. We are actively advancing a range of gold discoveries, prospects and targets across our approximately 7,000km2 ground position by utilizing a portfolio approach geared towards discovery.

Our core projects are favorably located north and north-west of Namibia’s capital city Windhoek. By virtue of their location, the projects benefit significantly from Namibia’s well-established infrastructure with paved highways, railway, power and water in close proximity. Namibia is mining-friendly and lauded as one of the continent’s most politically and socially stable jurisdictions. Osino continues to evaluate new ground with a view to expanding its Namibian portfolio. 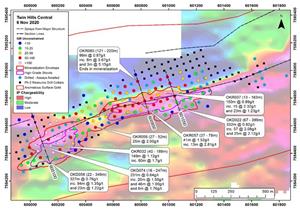 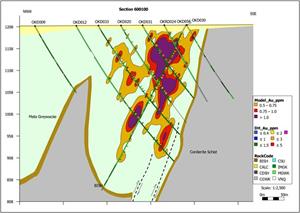 Section 600100 through West Lobe including OKD058 drilled down dip with mineralized intercept of 327m in length. 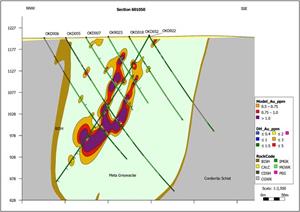 Section 601050 through east side of East Lobe showing mineralization drilled to 332m down dip in hole OKD022. 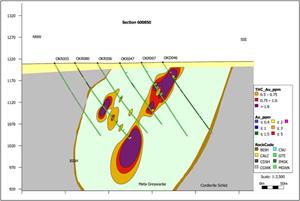 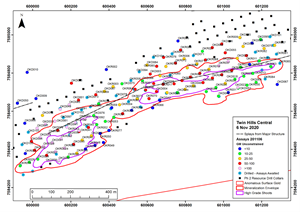