Use of this site indicates acceptance of the Privacy Policy and Terms of Use.
The information on this Website is not reliable and not intended to provide tax, legal, or investment advice. Nothing contained on the Website shall be considered a recommendation, solicitation, or offer to buy or sell a security to any person in any jurisdiction.
CEO.CA members discuss high-risk penny stocks which can lose their entire value. Only risk what you can afford to lose.
© 2016 - Pacific Website Company Inc.
@nasdaq/osino-resources-identifies-bedrock-gold-anomalies-in ↻
0 online
Today This week
Search Subscribe
Members of @nasdaq/osino-resources-identifies-bedrock-gold-anomalies-in

Regional exploration in 2017/2018 identified eight surface termite hill and calcrete anomalies located along the prospective sedimentary package which also hosts B2Gold’s Otjikoto Gold Mine. The objective of the late 2019 bedrock drilling campaign was to test five of the eight anomalies delineated in 2017/2018 with the aim of demonstrating coincident gold mineralization in bedrock below calcrete and wind-blown sand cover.

Highlights of the program are as follows:

Dave Underwood, Osino’s VP Exploration commented: “The surface gold anomalies previously identified in this emerging gold district were followed up with a small percussion drill program to sample bedrock through sand and calcrete cover under the surface gold anomalies. This was successful at two of the five tested anomalies, with bedrock gold having been identified at Fairview and Etekero up to a tenor of 200ppb Au to date. This is a strong indication that our pioneering surface sampling techniques are also effective in this challenging, previously unexplored terrain. We are particularly excited about the Fairview gold target, which includes two mineralized quartz veins at surface, and is situated just 30km’s from the producing Otjikoto Gold Mine. We are currently planning follow-up drilling of these targets for later in 2020 as well further target generation in these prospective settings.”

Osino has a large land holding across the Damara orogenic belt in northern Namibia totaling 6,577km2 split into three project areas, Twin Hills/Karibib, Otjikoto East and Otjiwarongo. Osino has had early success at Twin Hills, making a significant gold discovery under cover in 2019 and now entering into a major drill program. The company is using similar exploration techniques to identify gold prospects on the other green field exploration projects under license.

The Otjikoto East Project lies immediately to the east of the Otjikoto Gold Mine and covers an east-west syncline containing approximately 110km strike length of the lithologies hosting the gold mineralization at the mine. The prospective lithologies do not outcrop in the Otjikoto East area as they are covered by thick calcrete and wind-blown sand. In 2017 Osino carried out a detailed aeromagnetic survey to map the buried geology and select the most prospective areas for surface geochemistry.

Bedrock samples were collected by using a percussion rig to drill vertical holes through the calcrete or sand cover. At least three 1-meter samples were collected at the top of the bedrock and submitted for gold and multi-element analysis. This drilling was carried out in H2 of 2019 and assay results were recently received and interpreted.

A total of 153 vertical percussion holes were drilled on two lines across a surface gold-in-termite hill anomaly and outcropping quartz veins (rock chip samples up to 1.16 g/t Au and >3,000ppm Cu) (refer to Figure 2 below). The bedrock assays highlight a coincident gold and copper anomaly orientated ENE, parallel to the termite hill anomaly. The Fairview bedrock anomaly also coincides with prominent structures up to 5km in strike length visible in the aeromagnetic data. The marble unit drilled at Fairview is interpreted to be located between two sinuous faults and has been rotated in an anti-clockwise direction (refer to Figure 2 below).

This rotational movement has created extensional stress in the marble resulting in the emplacement of (mineralized) quartz veins.

There is also a potentially prospective magnetic anomaly located along the bend of the northern structure (refer to Figure 2 above).

The Etekero license is 75,000ha in size and lies 25km to the south of Otjiwarongo town on the tar road to Okahandja. Osino applied for the Etekero license in 2017 to cover a gold-in-termite hill anomaly discovered by Teck Resources but never followed up. The gold anomaly was originally detected during a regional stream sampling program and subsequently followed up with termite hill sampling at a spacing of about 200m.

The highest value in the termite hill samples was 131ppb Au. Osino flew an aeromagnetic survey over the southern portion of the license in 2017 and subsequently carried out a desktop geological interpretation and regolith (cover) mapping exercise.

In November 2019, Osino drilled a total of 93 vertical percussion holes to bedrock, on three fence lines across the termite hill anomaly (refer to Figure 3 below for location). The geology consists of granite to the northwest and greywacke intruded by granite sills, to the southeast. A coincident gold and arsenic anomaly is associated with the greywacke unit near the granite contact. The bedrock anomaly is currently 900m in strike length and is open to the northeast and southwest (refer to Figure 3 below).

The anomaly is parallel and closely associated with the regional scale Omaruru lineament, which is over 300km long and clearly visible in the aeromagnetic data. The Omaruru lineament is a fundamental basin margin structure that was reactivated as a steep reverse fault during the Damara Orogeny and could have acted as a conduit for circulation of metalliferous basinal brines.

This structural setting is highly prospective for orogenic gold deposits and resembles the setting for Twin Hills which is adjacent to the basin margin Karibib Fault.

Follow-up RC and/or diamond drilling is planned to test the width and strike of mineralization at the Fairview target (part of Otjikoto East project) later in 2020. In addition, the three untested surface anomalies at Otjikoto East (Omagonde, Gaidaus and Omahona), which have not been drilled to bedrock yet, will become part of the next follow-up program (refer to Figure 1).

Regional surface sampling will also be completed over the remaining prospective parts of the Otjikoto East stratigraphy, particularly certain structures and geology which were interpreted from the aeromagnetic data acquired by Osino in 2017. These targets will include:

At Etekero, follow-up RC and/or diamond drilling will be carried out later in the year to drill inclined holes across the bedrock anomaly for width and grade information. Surface sampling is also planned for the 35km strike length of the fertile Omaruru lineament, to locate further mineralization within the Etekero license.

David Underwood, BSc. (Hons) is Vice President Exploration of Osino Resources Corp. and has reviewed and approved the scientific and technical information related to geology and exploration in this news release, and is a registered Professional Natural Scientist with the South African Council for Natural Scientific Professions (Pr. Sci. Nat. No.400323/11) and a Qualified Person for the purposes of National Instrument 43-101.

All Osino sample assay results have been independently monitored through a quality assurance/quality control ("QA/QC") program including the insertion of blind standards, blanks and duplicate samples. QA/QC samples make up 10% of all samples submitted. Bedrock samples are prepared at Actlabs sample prep facility in Windhoek, Namibia. The rock is dried, crushed to 95% -10mesh, split to 250g and pulverised to 95% -150mesh. Sample pulps are sent to Ontario, Canada for analysis. Gold analysis is by 30g fire assay with AA finish and automatically re-analysed with Gravimetric finish if Au >5 g/t. In addition, pulps undergo 4-Acid digestion and multi-element analysis by ICP-AES or ICP-MS.

Osino is a Canadian gold exploration company, focused on the acquisition and development of gold projects in Namibia. Our 23 exclusive prospecting licenses are located within Namibia’s prospective Damara mineral belt, mostly in proximity to and along strike of the producing Navachab and Otjikoto Gold Mines. Osino is targeting gold mineralization that fits the broad orogenic gold model. We are actively advancing a range of gold discoveries, prospects and targets across our 6,577km2 ground position by utilizing a portfolio approach geared towards discovery.

Osino’s focus in 2020 is on defining and advancing the Twin Hills project and making new discoveries within the developing Karibib Gold District, testing our Otjikoto East and Otjiwarongo targets and generating new ones on our remaining licenses. Our core projects are favorably located north and north-west of Namibia’s capital city Windhoek. By virtue of their location, the projects benefit significantly from Namibia’s well-established infrastructure with paved highways, railway, power and water in close proximity. Namibia is mining-friendly and lauded as one of the continent’s most politically and socially stable jurisdictions. Osino continues to evaluate new ground with a view to consolidating its Namibian portfolio.

Further details are available on the Company's website at https://osinoresources.com/. 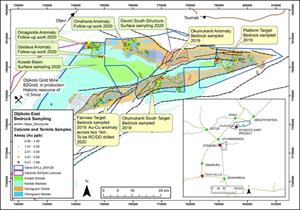 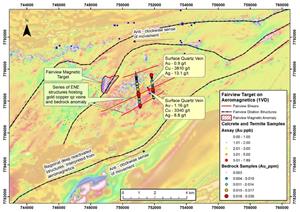 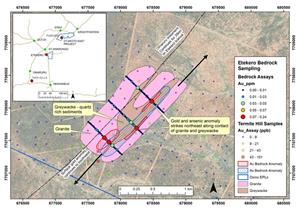