Use of this site indicates acceptance of the Privacy Policy and Terms of Use.
The information on this Website is not reliable and not intended to provide tax, legal, or investment advice. Nothing contained on the Website shall be considered a recommendation, solicitation, or offer to buy or sell a security to any person in any jurisdiction.
CEO.CA members discuss high-risk penny stocks which can lose their entire value. Only risk what you can afford to lose.
© 2016 - Pacific Website Company Inc.
@nasdaq/osino-resources-makes-new-gold-discovery-at-twin-hills ↻
0 online
Today This week
Search Subscribe
Members of @nasdaq/osino-resources-makes-new-gold-discovery-at-twin-hills

VANCOUVER, British Columbia, Aug. 26, 2019 (GLOBE NEWSWIRE) -- Osino Resources Corp. (TSXV: OSI) (FSE: RSR1) ("Osino” or “the Company”), is pleased to announce that it has discovered an extensive new zone of gold mineralization under cover at its Twin Hills Gold Project (“Twin Hills”), located in the Karibib Gold District in Namibia.

Heye Daun, Osino’s Founder & CEO commented: “The discovery of this wide zone of gold mineralization under cover at Twin Hills Central is a game changer for the company. These initial three holes indicate the potential for significant resource scale at Twin Hills with many kilometers of gold mineralization remaining to be tested. These initial drill results compare very favorably with the early exploration drilling results at both Navachab and Otjikoto (Namibia’s two producing gold mines). This success is the result of a dedicated team effort over the last two years combined with innovative science and out of the box thinking. We have just concluded the current drill program and we are already planning the next phase of drilling to further evaluate Twin Hills Central and test the other targets in the system. We look forward to a steady flow of news over the coming months.”

Twin Hills is Osino’s flagship exploration project and lies mostly under calcrete cover on the regional scale Karibib Fault, approximately 25km along strike from the producing Navachab Gold Mine (~6moz in past production and remaining resource, discovered by Anglo American in 1984). Osino has secured a total length of 70km of the Karibib Fault Zone under exclusive exploration license.

Osino recently completed a 7-hole, maiden diamond drill program at Twin Hills Central. The holes were drilled to approximately 200m depth at an inclination of 60 degrees, along three lines of 400m line spacing and 100m hole spacing. Refer to Figure 1 below.

Extensive mineralization was intersected in the first three holes and suggests a strike length of more than 400m and widths of up to 200m, open along strike to the east and west and down dip. Two of the holes (OKD001 and 2) ended in mineralization including 5m @ 1.43g/t in OKD002, and will be deepened before completion of the program.

The best intersections for the three holes received to date are:

The assays for the remaining 4 holes will be received over the next 6 weeks.

Figure 1 accompanying this announcement is available at https://www.globenewswire.com/NewsRoom/AttachmentNg/e8bf0e18-5f74-48f5-b7df-f7bc5ab9eca2

Notes: All reported intercepts are apparent widths. True widths are unknown at this stage. Included intercepts are at 0.4g/t cut off, minimum 2m wide and no more than 2m internal dilution. Total intersections are unconstrained.

Osino has been systematically exploring in the Karibib gold district since early 2017. Osino initially identified the regional scale Karibib Fault and gold trend using government magnetic data and interpretation of structure beneath cover. The outcropping, northeastern portion of the Karibib trend was explored by systematic soil sampling and mapping. However, it became clear that the majority of the prospective ground lay under younger cover (calcrete and sand) towards the southwest. A detailed ground magnetic survey along with calcrete sampling over the covered southwestern portion of the Karibib trend was carried out in 2018, which resulted in the discovery and delineation of a highly significant, 11km long and 2km wide gold anomaly at Twin Hills.

The mineralization is characterized by a magnetic anomaly (due to pyrrhotite), coincident with anomalous gold in bedrock situated on fault splays within the Karibib trend. The successful bedrock drilling early in 2019 was followed up with a maiden diamond drill program at Twin Hills Central during July 2019, with the objective of obtaining detailed structural and lithological information. This objective has now been met and has resulted in a greatly improved geological understanding as well as the discovery of extensive gold mineralization under cover.

Figure 2 accompanying this announcement is available at https://www.globenewswire.com/NewsRoom/AttachmentNg/3c4d47a9-6073-446c-9c6a-2bd0a2101d0d

The next program of diamond and RC drilling is planned for Q4 2019 and will include in-fill and step out drilling at Twin Hills Central, as well as initial testing of the targets along strike at Barking Dog, Clouds and Twin Hills West (pending bedrock sample results – see below).

A bedrock sampling program to confirm gold mineralization beneath the calcrete cover at several targets within the Twin Hills Project, was announced in a press release dated June 6, 2019. This bedrock sampling was completed on August 9, 2019 with a total of 259 holes for 7,152m over Barking Dog, Clouds and Twin Hills West targets (refer to Figure 2). These assay results are expected during August and September and will define bedrock targets for follow-up RC and diamond drilling in Q4 2019.

Initial results from this program were reported in a press release dated July 25, 2019.

Calcrete sampling has also been ongoing to the southwest of Twin Hills along the Karibib trend as announced on June 6, 2019. These results are expected towards the end of August 2019. Refer to Figure 1 above for further detail.

The technical information in this news release has been reviewed and approved by David Underwood, a Chartered Professional Geologist (SACNASP), and a Qualified Person for the purposes of National Instrument 43-101.

All Osino sample assay results have been independently monitored through a quality assurance / quality control ("QA/QC") program including the insertion of blind standards, blanks and duplicate samples. QA/QC samples make up 10% of all samples submitted. Logging and sampling are completed at Osino’s secure facility located in Omaruru near the Twin Hills Project. Drill core is sawn in half on site and half drill-core samples are securely transported to the Actlabs sample prep facility in Windhoek, Namibia. The core is dried, crushed to 95% -10mesh, split to 250g and pulverised to 95% -150mesh. Sample pulps are sent to Actlabs in Ontario, Canada for analysis. Gold analysis is by 30g fire assay with AA finish and automatically re-analysed with Gravimetric finish if Au >5 g/t. In addition, pulps undergo 4-Acid digestion and multi-element analysis by ICP-AES or ICP-MS.

Bedrock samples are prepared at Actlabs sample prep facility in Windhoek, Namibia. Samples are dried, crushed to 95% -10mesh, split to 250g and pulverised to 95% -150mesh. Sample pulps are sent to Actlabs in Ontario, Canada for analysis. Gold analysis is by 30g fire assay with AA finish and automatically re-analysed with gravimetric finish if Au >5 g/t. Calcrete samples are prepared at Intertek Analysis, Johannesburg, South Africa. Samples are dried, crushed to ~10mm and pulverised (300g up to 1.2kg). A split of 120g is shipped to the Intertek Analysis laboratory in Perth, Australia. Samples (10g) are leached in cyanide for 24 hours and analyzed for gold using ICPMS with an ultra-low detection limit of 0.01ppb. Additional elements analyzed are Ag, Cu and As.

Osino is a Canadian gold exploration company, focused on the acquisition and development of gold projects in Namibia. Osino is targeting gold mineralization that fits the broad orogenic gold model. We are actively advancing a range of gold discoveries, prospects and targets across our 6,700km2 ground position by utilizing a portfolio approach geared towards discovery. Our 22 exclusive exploration licenses are located within Namibia’s prospective Damara mineral belt, mostly in proximity to and along strike of the producing Navachab and Otjikoto Gold Mines.

Osino’s flagship project is the Twin Hills Gold Project, which is mostly covered by a thick layer of calcrete and lies on the regional scale Karibib Fault, approximately 25km along strike from the producing Navachab Gold Mine (~6moz in past production and remaining resource, discovered by Anglo American in 1984). Osino has secured a total length of 70km of the Karibib Fault Zone under exclusive exploration license.

Osino’s focus in 2019 is on further advancing the Twin Hills and Goldkuppe discoveries within the developing Karibib Gold District, testing our Otjikoto East and Otjiwarongo targets and generating new ones on our remaining licenses. Our core projects are favorably located north-west of Namibia’s capital city Windhoek. By virtue of their location, the projects benefit significantly from Namibia’s well-established infrastructure with paved highways, railway, power and water in close proximity.

Namibia is mining-friendly and lauded as one of the continent’s most politically and socially stable jurisdictions. Osino continues to evaluate new ground with a view to expanding its Namibian portfolio. 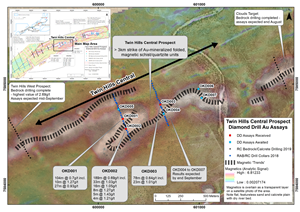 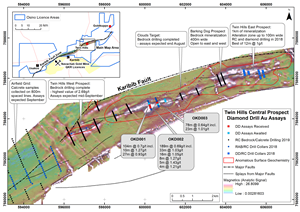