Use of this site indicates acceptance of the Privacy Policy and Terms of Use.
The information on this Website is not reliable and not intended to provide tax, legal, or investment advice. Nothing contained on the Website shall be considered a recommendation, solicitation, or offer to buy or sell a security to any person in any jurisdiction.
CEO.CA members discuss high-risk penny stocks which can lose their entire value. Only risk what you can afford to lose.
© 2021 - CEO.CA Technologies Ltd.
@nasdaq/puma-exploration-drilled-100-gt-au-over-406-meters ↻
0 online
Today This week
Search Subscribe
Members of @nasdaq/puma-exploration-drilled-100-gt-au-over-406-meters

by @nasdaq on 21 Oct 2021, 10:33
Puma Exploration Drilled 1.00 g/t Au Over 40.6 Meters and Extends the Gold Mineralised Zone Into the Sediments at Williams Brook Gold Property

These six (6) holes were collared to test the extension into the sediments of the gold bearing quartz veins intersected within the altered rhyolite by the previously announced six (6) drill holes (see Figure 1). These results clearly show that the gold mineralised envelope extends within the sediments and is not restrained to the altered rhyolite near the lithological contact.

Marcel Robillard, President and CEO, stated: “We are pleased to confirm that the significant high grade gold intercepts are not limited to the altered rhyolite but also extend into the sediments. It is in line with our structural model of a N260 oriented high-grade gold bearing quartz veins network open on both side and at depth. So far, results are impressive for a first initial 2,300 meters drilling campaign and needless to say that we can’t wait to launch the planned 10,000m soon!''

These gold bearing quartz veins networks are consistent along the favorable contact sediment/rhyolite and recent sampling results (see PR 2021-10-14) confirmed the presence of other similar systems along strike within the 7 kilometers potential O’Neil Gold Trend. Stripping and intense sampling will then be extended an additional 300 meters NE toward the Moose Gold Zone.

* Stated lengths in meters are downhole core lengths and not true widths. True widths will be calculated once more drilling confirms the geometry of the quartz-sulphide system.

CURRENT WORK PROGRAM AT WILLIAMS BROOK GOLD PROJECT
Puma's technical team continues to better define and extend the gold zones on surface by prospecting, trenching, stripping, and intense sampling in preparation for the next drilling campaign scheduled later in 2021. Also, a ground IP geophysical test survey is in progress over the OGT to see if the high-grade gold zones have a specific geophysical signature. Current work programs are highlighted on the Figure 2.

O’NEIL GOLD TREND (OGT)
The O’Neil Gold Trend (OGT) is a pervasive altered and brecciated rhyolite unit hosting significant gold showings and occurrences followed by trenching and drilling over a strike length of 700 meters. The geophysical signature of the OGT is expressed over 7km. The favourable unit (rhyolite) is similar and parallel to the structures hosting the “Williams 1” and “Williams 2” Gold Zones where previous operator drilled in 2008, 54.2 g/t Au over 2.8 meters and 1 g/t Au over 23 meters.

These trends are interpreted to be related to a major rifting in the New Brunswick Geological events and could represent a low sulphidation epithermal gold system. Along the OGT, the width of the rhyolite varies from 5 to 250 meters with an average apparent thickness of 150 meters.

The core-oriented maiden drill campaign was completed on August 20, 2021. It consisted of 18 holes for a total of 2,360 meters that tested a 200-meter segment of the 700-meter-long O’Neil Gold Trend (OGT). The assay results for the twelve (12) first holes are released and all holes intersected significant gold mineralisation including the discovery hole WB21-02 that cut 5.55 g/t Au over 50.15 meters from surface, including 9.88 g/t Au over 8.60 meters and 46.94 g/t Au over 3.85 meters. The assays are pending for the remaining 6 drill holes.

QUALIFIED PERSONS
Dominique Gagné, PGeo, independent qualified person as defined by Canadian National Instrument 43-101 standards, has reviewed and approved the geological information reported in this news release. Neither TSX Venture Exchange nor its Regulation Services Provider (as that term is defined in the policies of the TSX Venture Exchange) accepts responsibility for the adequacy or accuracy of this release. Mr. Gagné is independent of the Company.

QUALITY ASSURANCE/QUALITY CONTROL (QA/QC)
Rock samples were bagged, sealed and sent to the facility of ALS CHEMEX in Moncton, New Brunswick where each sample is dried, crushed, and pulped. The samples were crushed to 70% less than 2mm, riffle split off 1kg, pulverise split to better than 85% passing 75 microns (Prep-31B). A 30-gram subsplit from the resulting pulp was then subjected to a fire assay (Au-ICP21). Other screen sizes available. Duplicate 50g assay on screen undersize. Assay of entire oversize fraction.

ABOUT PUMA EXPLORATION
Puma Exploration is a Canadian-based mineral exploration company with precious and base metals projects in early to advanced stages located in the Famous Bathurst Mining Camp (BMC) in New Brunswick, Canada. Great efforts will be made by the Company in the coming years to deploy its DEAR strategy (Development, Exploration, Acquisition and Royalties) in order to generate maximum value for shareholders with low shares dilution. 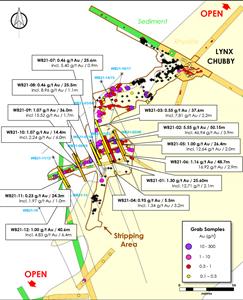 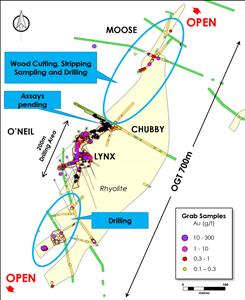