Use of this site indicates acceptance of the Privacy Policy and Terms of Use.
The information on this Website is not reliable and not intended to provide tax, legal, or investment advice. Nothing contained on the Website shall be considered a recommendation, solicitation, or offer to buy or sell a security to any person in any jurisdiction.
CEO.CA members discuss high-risk penny stocks which can lose their entire value. Only risk what you can afford to lose.
© 2021 - CEO.CA Technologies Ltd.
@nasdaq/red-pine-provides-updates-on-wawa-gold-projectongoing ↻
0 online
Today This week
Search Subscribe
Members of @nasdaq/red-pine-provides-updates-on-wawa-gold-projectongoing

TORONTO, July 19, 2021 (GLOBE NEWSWIRE) -- Red Pine Exploration Inc. (TSX-V: RPX) (“Red Pine” or the “Company”) is pleased to report on drill progress at the Wawa Gold Project, including the discovery of new mineralized zones, extension of the Minto Mine South deposit and additional evidence of the continuity of the Surluga resource down plunge.

“Following the consolidation of the Wawa Gold Project by Red Pine just over three months ago, the Company entered into an extremely competitive marketplace for drill contractors. These conditions have resulted in a longer ramp-up in drilling productivity than originally planned; however, we are pleased with the changes made by our drilling contractor to achieve expected drilling standards.

Red Pine commenced the 2021 exploration program with one drill, and we are pleased to announce that we now have three drills on site with two operating and the third awaiting confirmation of a drill crew. The Company aims to catch up on its drilling plans and be in a position to accelerate the program through 2021. These additional drills should result in a consistent flow of drilling results both from the main deposits at Surluga and Minto Mine South, and from the high priority new target areas at Darwin Grace and the Hornblende Shear once we commence the respective drilling.

The exploration team also progressed surface exploration activities on and adjacent to the recently acquired War Eagle claims, as well as on the southern extension of the Grace Shear Zone. Assays remain pending from these activities.” – Quentin Yarie, President and CEO.

As part of its on-going 2021 exploration drilling program, Red Pine has completed four drill holes, two of which were abandoned at shallow surface on account of too much deviation at the collar of the holes, which would have resulted in the drill holes missing their intended targets in the Jubilee Shear Zone. Two of the completed holes were testing an under-explored area of the Jubilee Stock between the Hornblende and Jubilee Shear Zone near the Surluga mine shaft. The other two drill holes were testing the down-dip extensions of the Minto Mine South and Surluga deposits. Assays remain pending for the lower part of SD-21-296A and for the entirety of SD-21-297A.

Exploratory drilling below the Surluga deposit, near the shaft and workings of the historic Surluga Mine resulted in the discovery of new zones of mineralization between the Jubilee and the Hornblende shear zones of variable width and grade content. The geometry and continuity of these zones are not constrained. Drilling in the southern extension of the Surluga deposit led to the discovery of the potential down-dip extension of the Minto E Shear Zone in which Red Pine obtained significant drilling results in 2017 that included 31.20 g/t gold over 1.02 metres in SD-17-99. Additional drilling will however be necessary to confirm the association between the zone discovered in SD-21-296A and the Minto E Shear Zone.

The Jubilee Shear Zone was successfully intersected in both holes SD-21-296A and 297A, confirming the extension of the structure 440 metres away from the current boundary of the Surluga Deposit resource. Hole SD-21-297A also discovered the extension of the Minto Mine South vein 75 metres down-dip of the current boundaries of the Minto Mine South Deposit resource.

Table 2 - Coordinates of the reported holes

In parallel to its diamond drilling program, Red Pine conducted a prospecting and surface mapping program on and within the surroundings of the War Eagle claims acquired in April 2021. In addition, Red Pine also prospected the southern extension of the Grace Shear Zone and other showings of the property with limited or little recent exploration work conducted.

Field mapping and prospecting on and around the War Eagle claims identified numerous shear zones with visual indicators suggesting the presence of gold mineralization. This includes quartz shear veining, pyrite and arsenopyrite mineralization, and areas of strong biotite or white micas alteration. Field mapping was also successful at confirming the southern extension of the Grace Shear Zone 125 metres along strike of the southernmost extension of the underground workings of the Darwin-Grace mine.

Drill core samples were transported in security sealed bags for analyses at Actlabs in Ancaster, Ontario. Individual samples were labelled, placed in plastic sample bags and sealed. Groups of samples were then placed into durable rice bags and then shipped. The residual coarse reject portions of the samples remain in storage if further work or verification is needed.

Red Pine has implemented a quality-control program to comply with best practices in the sampling and analysis of drill core. As part of its QA/QC program, Red Pine inserts external gold standards (low to high grade) and blanks every 20 samples in addition to random standards, blanks, and duplicates.

Quentin Yarie, P.Geo. and Chief Executive Officer of Red Pine and the Qualified Person, as defined by National Instrument 43-101, has reviewed and approved the news release’s technical information.

Red Pine has developed and implemented compliant precautions and procedures according to guidelines for the Province of Ontario. Protocols were put in place to ensure our employees’ and contractors’ safety, thereby reducing the potential for community contact and spreading of the virus.

Red Pine Exploration Inc. is a gold and base-metals exploration company headquartered in Toronto, Ontario, Canada. The Company's common shares trade on the TSX Venture Exchange under the symbol "RPX".

For more information about the Company, visit www.redpineexp.com 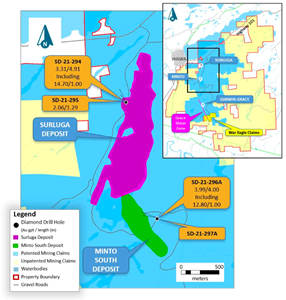