Use of this site indicates acceptance of the Privacy Policy and Terms of Use.
The information on this Website is not reliable and not intended to provide tax, legal, or investment advice. Nothing contained on the Website shall be considered a recommendation, solicitation, or offer to buy or sell a security to any person in any jurisdiction.
CEO.CA members discuss high-risk penny stocks which can lose their entire value. Only risk what you can afford to lose.
© 2021 - CEO.CA Technologies Ltd.
@nasdaq/scottie-reports-high-grade-surface-results-on-recently ↻
0 online
Today This week
Search Subscribe
Members of @nasdaq/scottie-reports-high-grade-surface-results-on-recently

VANCOUVER, British Columbia, Nov. 14, 2019 (GLOBE NEWSWIRE) -- Scottie Resources Corp. (“Scottie” or the “Company”) (TSXV: SCOT) is pleased to provide an update on assay results from the newly discovered Domino zone, including grab samples of up to 536 g/t Au and 735 g/t Ag, and a chip sample grading 10.5 g/t Au and 14.0 g/t Ag over 5.3 m. The Domino zone is situated on a mineralized E-W trending structure, 1.9 km west on strike of the 100% owned past-producing Scottie Gold Mine, where mineralization is primarily controlled by E-W structures.

"These initial sample results are exciting, their distribution and high-grade nature fit spectacularly with our working geological model" said Dr. Thomas Mumford, the Company’s VP, Exploration. "This mineralized structure will be a high-priority drill target for the 2020 field season, the potential that it may connect to the Scottie Gold Mine mineralizing system make this an exceptional discovery. Sampling of many of these sites was only possible due to significant glacial retreat in recent years, and we are eager to get back on the ground to find and delineate more drill targets.”

During the 2019 field season, prospecting, sampling, and detailed mapping was carried out on several locations on the Summit Lake property, resulting in the discovery of multiple new mineral occurrences (see news release date August 27, 2019). One of the new discoveries was the Domino showing (Figure 1), which is described as a pyrrhotite > pyrite massive sulphide lens with quartz-carbonate veins, >30 m long with an average width of 4 m. Follow-up sampling and mapping around the massive-sulphide lens revealed another smaller massive-sulphide lens, and multiple parallel mineralized shear structures oriented E-W, which exhibit patchy oxidation and quartz-sericite-pyrite alteration. The Domino zone consists of multiple parallel discreet shear structures that occur in a area that strikes for more than 700 m, and has a width of approximately 200 m. Grab sampling of the mineralized shear structures within this zone returned multiple high-grade gold values (Figure 1). A total of 57 grab samples were taken from the Domino zone; 7 had gold grades of greater than 10 g/t (Table 1), and 16 with grades between 1 - 10 g/t.

The Domino zone is situated 1.9 km due west of the 100% owned Scottie Gold Mine (Figure 1) which produced 95,426 oz of gold at a recovered grade of 16.2 g/t. The mine operated from 1981-1985 and was shut down due to economic challenges, not because the ore body was exhausted. Unmined intercepts include:

Mineralization at the Scottie Gold Mine largely consists of east-west trending, steeply dipping shear veins, that are comprised of pyrrhotite > pyrite ± quartz ± calcite. Both the Scottie Gold Mine and the Domino zone are hosted in Jurassic age andesitic volcanics of the Unuk River Formation (Hazelton Group), and occur proximal to the Summit Lake Stock (part of the Texas Creek plutonic suite). Additionally the Domino zone is situated adjacent to a large electromagnetic (EM) anomaly, comparable in size and character to the EM anomaly coincident with the Scottie Gold Mine (Figure 1). Locally, EM anomalies occurring within the andesitic rocks have been correlated with strong pyrrhotite mineralization. Due to the spatial connection and strong similarities in mineralogy and grades, fieldwork and diamond drilling in 2020 will begin to evaluate the Domino zone as an extension of the mineralizing system that formed the Scottie Gold Mine.

The Domino zone extends into the historically mapped sulphide zone, which returned grab samples with grades up to 37.96 g/t. Historic work (1989 - 1990) on the sulphide zone was limited in scope, and was strongly restricted by seasonal snow and glacial coverage. In the following 29 years there has been significant glacial retreat, exposing an expanse of altered and sheared volcanic rocks. Sampling of this altered and sheared zone during the 2019 season led to the discovery of the Domino zone.

As part of the 2019 program, a chip sample taken perpendicular to the primary trend of the Domino zone averaged 10.5 g/t Au and 14.0 g/t Ag over a 5.3 metre interval (Table 2). The high gold grades returned in the chip samples were remarkable due to the subtle mineralization observed during sampling. It is important to note that the two highest grades obtained in the chip sample are at the ends, essentially bracketing the zone. The chip sample was centered in the middle of a wide zone of gossanous rocks, and did not extend all the way outwards into unaltered rocks, leaving the possibility that mineralization extends further – likely increasing the width of the zone. Additional surface sampling is planned for the 2020 season to further define the extent of the zone.

Results from samples were analyzed at ALS Global Laboratories (Geochemistry Division) in Vancouver, Canada (an ISO 9001:2008 accredited facility). The sampling program was undertaken by Company personnel under the direction of Thomas Mumford. A secure chain of custody is maintained in transporting and storing of all samples. Gold was assayed using a fire assay with atomic absorption spectrometry and gravimetric finish when required (+10 g/t Au). Individual grab samples taken during the project represent point locations in the field, and were typically collected from rocks covering an area of less than 0.5 m2. Grab samples from outcrop/bedrock are selective by nature and they may not be representative of the mineralization hosted on the project.

Thomas Mumford, Ph.D., P.Geo and VP Exploration of Scottie, a qualified person under National Instrument 43-101, has reviewed the technical information contained in this news release on behalf of the Company.

All of the Company’s properties are located in the area known as the Golden Triangle of British Columbia which is among the world’s most prolific mineralized districts.

Further information on Scottie can be found on the Company’s website at www.scottieresources.com and at www.sedar.com, or by contacting Bradley Rourke, President and CEO at (250) 877-9902. 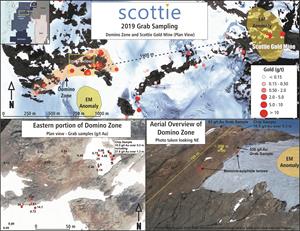 2019 Surface sampling on the Domino zone and surrounding area