Use of this site indicates acceptance of the Privacy Policy and Terms of Use.
The information on this Website is not reliable and not intended to provide tax, legal, or investment advice. Nothing contained on the Website shall be considered a recommendation, solicitation, or offer to buy or sell a security to any person in any jurisdiction.
CEO.CA members discuss high-risk penny stocks which can lose their entire value. Only risk what you can afford to lose.
© 2022 - CEO.CA Technologies Ltd.
@nasdaq/scottie-resources-intercepts-118-gt-gold-over-657 ↻
0 online
Today This week
Search Subscribe
Members of @nasdaq/scottie-resources-intercepts-118-gt-gold-over-657

VANCOUVER, British Columbia, Jan. 14, 2022 (GLOBE NEWSWIRE) -- Scottie Resources Corp. (“Scottie” or the “Company”) (TSXV: SCOT), (OTCQB:SCTSF), (FSE:SR8) is pleased to report drill assays from its Scottie Gold Mine (SGM) target. Due to the parallel nature of the targeted veins, individual holes were designed to test multiple discreet targets. Highlight intercepts from the reported holes include: 11.8 g/t gold over 6.57 metres, 20.6 g/t gold over 2.22 metres, and 37.2 g/t gold over 3.71 metres in the P, O, and M-Zones respectively. The past-producing high-grade Scottie Gold Mine is located on the Granduc Road, 35 kilometres north of the town of Stewart, BC, and is one of four primary targets that were tested during the 14,500 m program in 2021, which also includes the rapidly advancing Blueberry Zone (November 9, 2021) .

“These results from Scottie Gold Mine illustrate the potential for the expansion of the historic resource at Scottie through both the extension of known ore shoots, as well as revealing the potential of previously untested targets – notably the P-zone which prior to Scottie’s involvement had seen no drilling, and now we are hitting intercepts comparable to the mined stopes of the past producing mine.“ comments President and CEO, Brad Rourke. “The Scottie Gold Mine target continues to deliver as a cornerstone to our primary goal of developing a road accessible, 1M+ ounce high-grade gold resource at our Scottie Gold Mine Project.”

Figure 1: Plan view map of recent drilling on the Scottie Gold Mine.
https://www.globenewswire.com/NewsRoom/AttachmentNg/33c8d0a8-d4cc-49ff-ac10-c5fe51bfe13b

Scottie is also pleased to announce the re-appointment of Stephen Sulis as Chief Financial Officer. Mr. Stephen Sulis is currently working as CFO with a number of TSX-V and CSE listed companies, predominately focused on the resource sector, both in Canada and around the globe. His professional experience includes exploration and mining companies, implementation of accounting software, various equity financings and implementation of internal control policies. In addition to his accounting experience, previously Mr. Sulis worked in the financial sector with TD Canada Trust. Mr. Sulis graduated with distinction at Capilano University, North Vancouver, and holds a bachelor’s degree in business administration as well as an advanced diploma in international business studies.

The Company wishes to thank Lisa Peterson for her service and wishes her all the best in her future endeavours.

About the Scottie Gold Mine

The Scottie Gold Mine, which operated between 1981 to 1985, produced 95,426 gold ounces from 183,147 tonnes at an average recovered grade of 16.2 g/t gold. The mine ultimately shut down due to a drop in gold price combined with high-interest rates. Mineralization consists of east-west to northwest trending, steeply dipping, shear veins, that are comprised of pyrrhotite > pyrite ± quartz ± calcite. The veins are hosted in a package of andesitic volcanic rocks from the Hazelton Unuk River Formation that are situated adjacent to the contact with the Summit Lake stock, part of the Texas Creek Plutonic Suite. While 13 distinct gold-bearing vein zones have been identified on the Scottie Gold Mine Project, mine production was primarily from one vein (the M-zone).

Historical drilling of the Scottie Gold Mine was largely focused on mine production, with little work done on proving up substantial resources. The majority of historical drilling was done from underground, and therefore consisted of short holes with single targets – with very restricted drill pad locations. Recent exploration by Scottie has used the benefits of drilling from surface to target areas that were inaccessible with underground drill locations, and where possible to test multiple targets with individual holes. The Scottie Gold Mine is located on the Granduc Road, 20 km north of the Ascot Resources’ Premier Project, which is in the process of refurbishing their mill in anticipation of production in Q1 2023 (December 7, 2021).

Results from samples during the 2021 field season were analyzed at either ALS Laboratory in Vancouver, BC or at SGS Minerals in Burnaby, BC. The sampling program was undertaken under the direction of Dr. Thomas Mumford. A secure chain of custody is maintained in transporting and storing of all samples. Gold was assayed using a fire assay with atomic absorption spectrometry and gravimetric finish when required (+9 g/t Au). Analysis by four acid digestion with multi-element ICP-AES analysis was conducted on all samples with silver and base metal over-limits being re-analyzed by emission spectrometry.

Thomas Mumford, Ph.D., P.Geo and VP Exploration of Scottie, a qualified person under National Instrument 43-101, has reviewed the technical information contained in this news release on behalf of the Company.

Scottie owns a 100% interest in the high-grade, past-producing Scottie Gold Mine and Bow properties and has the option to purchase a 100% interest in Summit Lake claims which are contiguous with the Scottie Gold Mine property. Scottie also owns 100% interest in the Georgia Project which contains the high-grade past-producing Georgia River Mine, as well as the Cambria Project properties and the Sulu property. Altogether Scottie Resources holds more than 52,000 ha of mineral claims in the Stewart Mining Camp in the Golden Triangle.

All of the Company’s properties are located in the area known as the Golden Triangle of British Columbia which is among the world’s most prolific mineralized districts. 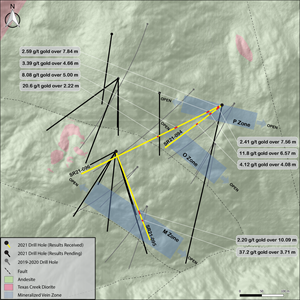 Plan view map of recent drilling on the Scottie Gold Mine.