Use of this site indicates acceptance of the Privacy Policy and Terms of Use.
The information on this Website is not reliable and not intended to provide tax, legal, or investment advice. Nothing contained on the Website shall be considered a recommendation, solicitation, or offer to buy or sell a security to any person in any jurisdiction.
CEO.CA members discuss high-risk penny stocks which can lose their entire value. Only risk what you can afford to lose.
© 2021 - CEO.CA Technologies Ltd.
@nasdaq/taat-adds-19-us-wholesalers-in-60-days-adding-distribution ↻
0 online
Today This week
Search Subscribe
Members of @nasdaq/taat-adds-19-us-wholesalers-in-60-days-adding-distribution

LAS VEGAS and VANCOUVER, British Columbia, Oct. 15, 2021 (GLOBE NEWSWIRE) -- TAAT™ GLOBAL ALTERNATIVES INC. (CSE: TAAT) (OTCQX: TOBAF) (FRANKFURT: 2TP) (the “Company” or “TAAT™”) is pleased to announce that over the past 60 days it has secured 19 new relationships with U.S. wholesalers to carry TAAT™, adding distribution in new states such as Virginia (population 8.5 million), Oregon (population 4.2 million), and Missouri (population 6.1 million). In a press release dated August 17, 2021, the Company announced that it had obtained distribution in seven new U.S. states (AL, CA, FL, GA, IL, MI, MS) in just two months, and announced shortly thereafter in a press release dated September 24, 2021 that the count of TAAT™ retailers across the country officially surpassed the 1,000-store mark. Just three weeks later, the Company has confirmed that more than 1,200 stores in the United States now carry TAAT™ at retail. An interactive store finder map of TAAT™ retailers can be found on the Company’s TryTAAT portal at the following link (must be 21+): https://trytaat.com/pages/sca-store-locator

In addition to TAAT™ being available for purchase by the majority of smokers aged 21+ in the United States through e-commerce, the Company is also undertaking its first international launches in markets to include Australia, as well as the United Kingdom and Ireland (for which a 43,000-pack shipment landed in late September 2021). By adding more than a dozen new distributors in the United States and bringing its new manufacturing facilities in Las Vegas, Nevada into operation last month (as announced in a September 3, 2021 press release), the Company is confident that it can further scale its commercialization of TAAT™ between increased production bandwidth and an expanded network of retailers.

A photo accompanying this announcement is available at https://www.globenewswire.com/NewsRoom/AttachmentNg/e8eeeb5f-a753-44fe-a68c-0c3b2cf2a55f

TAAT™ Chief Executive Officer Setti Coscarella commented, “As more smokers aged 21+ are choosing TAAT™ instead of tobacco cigarettes, we believe consumer-level demand has influenced retailers of tobacco products and their respective wholesalers to begin carrying TAAT™ as part of their tobacco category offerings. Additionally, we have held TAAT™ exhibits at several commercial trade shows in recent months to include the NACS Show in Chicago, which is the largest and most prominent such event in the U.S. convenience industry. These events have enabled us to start dialogues and form relationships with wholesalers who we have converted into TAAT™ distributors at a remarkable rate. Now that we have increased production capacity through our new facilities in Las Vegas, we are picking up the pace at which we are adding new distributors, states, and points of sale across the country. I am very impressed with the momentum we have achieved with 19 new distributors in the past 60 days and a 20% increase in our store count in the past three weeks, and we look forward to building upon this growth for our first international launches that are presently underway.” 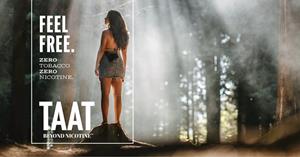 In the past 60 days, the Company has added 19 new distributors in the United States, who have contributed to the rapid growth of the Company’s store count which recently surpassed 1,200 stores within just ten months of the initial launch of TAAT™ in December 2020