Use of this site indicates acceptance of the Privacy Policy and Terms of Use.
The information on this Website is not reliable and not intended to provide tax, legal, or investment advice. Nothing contained on the Website shall be considered a recommendation, solicitation, or offer to buy or sell a security to any person in any jurisdiction.
CEO.CA members discuss high-risk penny stocks which can lose their entire value. Only risk what you can afford to lose.
© 2021 - CEO.CA Technologies Ltd.
@nasdaq/taat-now-sold-in-over-1000-us-stores-more-than ↻
0 online
Today This week
Search Subscribe
Members of @nasdaq/taat-now-sold-in-over-1000-us-stores-more-than

LAS VEGAS and VANCOUVER, British Columbia, Sept. 24, 2021 (GLOBE NEWSWIRE) -- TAAT™ GLOBAL ALTERNATIVES INC. (CSE: TAAT) (OTCQX: TOBAF) (FRANKFURT: 2TP) (the “Company” or “TAAT™”) is pleased to announce that its nicotine-free and tobacco-free flagship product TAAT™ is now carried in more than 1,000 retail points of sale across the United States (to include Puerto Rico) approximately ten months after TAAT™ first launched in the United States in December 2020 in Ohio. Additionally, cumulative sales of TAAT™ in the United States now exceed 600,000 packs, amounting to a total of more than twelve million sticks each representing a better choice for smokers of legal age.

In its August 17, 2021 press release, the Company announced that it had added distribution for TAAT™ in seven new U.S. states in just two months, shortly after announcing in an August 6, 2021 press release that its store count nationwide had reached approximately 500 points of sale. Less than two months later, this figure has approximately doubled with a confirmed total of more than 1,000 TAAT™ retailers following the addition of an entire 147-store chain in Michigan (announced in the Company’s August 25, 2021 press release) as well as several retailers in the southern and western regions of the United States as shown in the map below. The interactive store locator map can be accessed on TryTAAT at the following link (must be 21+ to access): https://trytaat.com/pages/sca-store-locator

In addition to the continued expansion of the market presence of TAAT™ in the United States, the Company has been planning launch initiatives in multiple overseas markets to include the United Kingdom, Ireland, and Australia. This week, the first TAAT™ shipment to fulfill purchase orders from the Company’s exclusive distributor for the U.K. and Ireland was dispatched from the TAAT™ contract manufacturer’s facility and is expected to arrive by the end of the month. Furthermore, the launch of TAAT™ in Puerto Rico could prove advantageous based on its excise tax being the highest in the United States at USD $5.10 per pack1, which can make TAAT™ an attractively priced alternative for smokers aged 21+ as a non-tobacco product. By comparison, the highest tobacco excise tax rate in the mainland U.S. is the District of Columbia at USD $4.50 per pack, with the lowest rate being in Missouri at USD $0.17 per pack, and an overall average of USD $1.91 per pack1.

TAAT™ Chief Executive Officer Setti Coscarella commented, “Our trade show exhibits have been a major catalyst for growth in the United States, as retail chain buyers and wholesalers who deal with tobacco products intuitively pick up on the value proposition of TAAT™ for smokers aged 21+ the second they step into our booth. We have had incredible velocity over the past couple of months in terms of gaining new U.S. store placements, and we could not be more excited for TAAT™ to begin hitting store shelves in the United Kingdom and Ireland as early as within the next couple of weeks with our first shipment to London currently en route.” 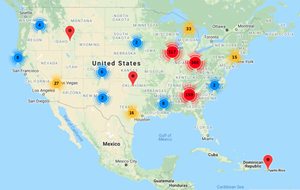 The map pictured above provides an overview of where TAAT™ retailers are located across the United States. Please note that although not all stores can be seen on this map due to reporting latency from TAAT™ distributors, the Company has consulted with its distribution partners to confirm that the overall store count exceeds 1,000 as of 9:00 am EDT on Friday, September 24, 2021. An interactive version of this map can be accessed by clicking here: https://trytaat.com/pages/sca-store-locator (must be 21+).